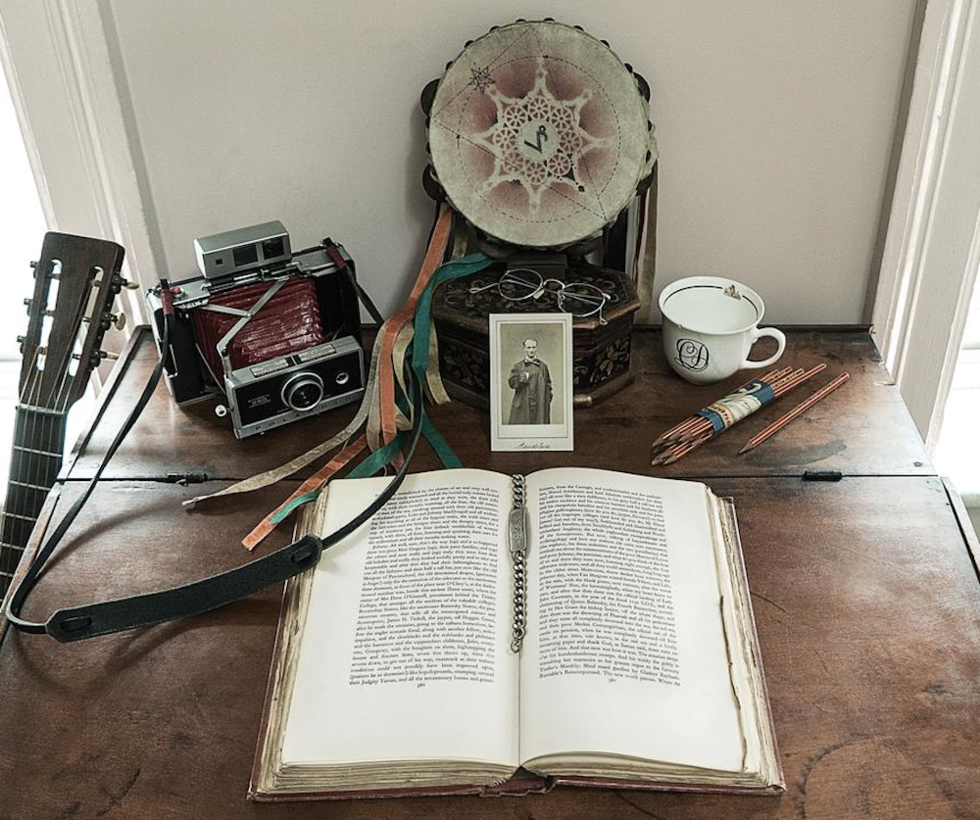 “That’s a Polaroid Land 250. I lost a similar camera in Rockaway Beach right before Hurricane Sandy. I’ve taken photographs on and off since the ’60s, but I started taking them more in the mid-1990s, after my husband died. On the far left is a 1927 Martin parlor guitar. It was given to me by the poet Oliver Ray, who played in our band for several years. Robert Mapplethorpe made the tambourine for my 21st birthday in 1967. He stretched the goatskin, tied the ribbons and tattooed the Capricorn symbol. The ribbons have faded, but it’s still very strong. It’s resting on a hand-painted wooden box that my daughter gave me on what would have been my 30th wedding anniversary with her late father. I change what I keep in it. Right now there’s Robert’s pencil sharpener, my husband’s guitar capo and little river stones, among other things. My reading glasses are extremely precious to me—books are central to my life, and I couldn’t read them without my glasses! That is a rare carte-de-visite of Charles Baudelaire, photographed by Étienne Carjat, which I bought in Paris. I like to take part of my fee from readings or lectures—or all of it—and buy something. I bought the porcelain coffee cup at the Charles Dickens house in London for my father’s birthday. He was English, so he loved it. It was his coffee cup until he died. The pencils are a gift from a friend of mine who lives in Spain. Pencils are the most humble tools of the writer. I write everything first in longhand. The book is a first edition of Finnegans Wake, signed by James Joyce in green ink. The book is almost unreadable—but as an object it’s beautiful. The chain in the middle is the ID bracelet I gave to my late brother, Todd, on his birthday in 1978. Todd was my tour manager when I was on the road. We had a hit song with ‘Because the Night,’ and I bought it for him to symbolize everything we had to celebrate. All of these things, they’re memories. They all speak of someone.”