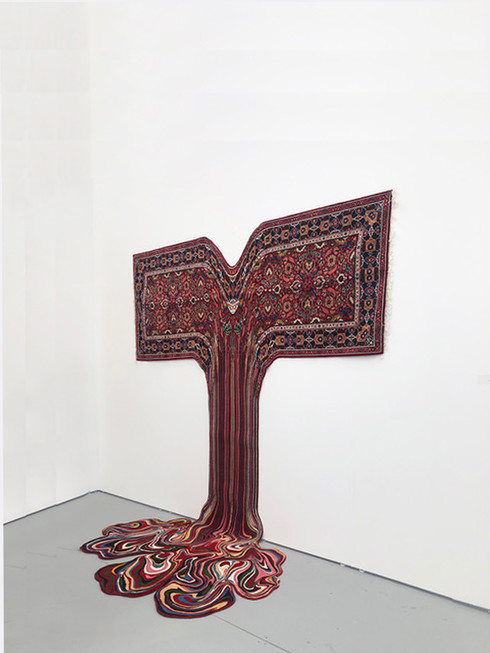 A Personal Essay by Ludmilla Christeseva

The Art Basel show in Miami ran through December 5th thru 9th, introduces and re-introduces artists from around the world. Turning downtown and Miami beach area into a hub of art exhibitions and events, the primary art show in the United States brings the art society together not only for festivities and inspiration but also for great deals in the art business. After consuming art for one week on the sunlit South beach, interpretation is obligatory.

The diverse artistic expression of The UNTITLED Art Fair on Ocean Drive in South Beach seemed to offer the most exciting art collection with a focus on gender issues. There, in booth B 27, male artist Faig Ahmed from Azerbaijan introduced his Liquid Design carpets, hand-made by female weavers from his home country. As a typical Persian rug could be overlooked, the distinct psychedelic nature of Ahmed’s works is undeniable and one is left to ponder the widely overlooked cultural and historical nature of what lies behind this traditional tapestry.

Since at nomadic times some 2,500 years ago at least, tapestries have been embellishing homes in the Middle East. Designing a place to live and raise our children, however, we should remember that this is the place where gender equality begins and where every object can be intertwined with issues of power and subjectivity, gender and class, culture and individuality. One might be able to see beyond the pleasant aesthetics of hand-woven carpets: they are historically produced by women, yet marketed by men.

Sustained by traditions centuries-old and crossing cultural boundaries, women are widely recognized as the carpet weavers. In villages, women have historically woven carpets for family use and would teach their daughters these skills. Girls would have a greater chance of marrying if they were skilled weavers, textiles were a part of young girls’ dowry to their future husbands whom they, perhaps did not wish to marry. They would take great care in following traditions. Carpet weaving would serve for them as a way to share their stories about daily life, tribal culture, thoughts and perhaps, impossible dreams.

While providing comfort, warmth as well as decor, tapestry speaks about gender inequality and unpack power relationships in society. The Liquid Design rugs by Faig Ahmed are no exception. I can see through the colour palettes that they are still produced by women but appropriated by men who try to tell the world a different story rather than that of women and carpet weaving which are almost exclusively linked.

Being both amused and distracted by the manufactured defects, which were skilfully appropriated in the art world of the Azerbaijan artist and conceptualized as a series of handmade woolen carpets, we have gradually moved beyond the suggested psychedelic understanding. This colourful digitalization was executed by the Middle Eastern women and submitted at the world’s largest art fair by a young and talented male artist. Capturing the assiduous cultivation of authenticity and diversity in Faig Ahmed's rugs, I was wondering if his artistic exploration of the field of artisan know-how and creativity connected to today’s contemporary solutions, empowers the women who work for him, to learn by doing. In this part of the world, women are products of cultures that maintain the traditional roles of females to remain at home and know how to take care of families and raise children.  Restricted to their households, tribal art functions both as a duty and for enjoyment, but also as a language widely used to tell women’ stories, feelings and dreams. This language, however, has remained unvarying throughout generations. The yearning of a young woman to get married is still always the emphasis.

Represented by the Sapar Contemporary gallery in New York City, Faig Ahmed has been exhibiting his handcrafted collection of the psychedelic creations worldwide, gradually earning his status as a spiritual contemporary artist. Suggesting an excited invasion of the traditions of tapestry and I would say of traditions, in general, Faig Ahmed involves ornaments in his artistic language. To me, the meaning of an ornament is, on one hand, a decoration and is a way to organize an object, but on the other hand, it acts as a constant repetition, which is regular and stable. So are the traditions, which are passed down from one generation to another, repeated, and cherished. We are not allowed to change or question them and are therefore afraid.  Using the habitual patterns, Faig Ahmed is developing trust. But what kind of message do his works actually carry? How are social values and norms communicated and discussed through his innovative approach? His disobedient behaviour found in this series of bizarre psychedelic carpets brings many women together in the production process. To me, the weaving in the works of Faig Ahmed is not about decoration or interior solutions, but rather it is about women’s rights which are rooted in patriarchy, which women unconsciously or consciously choose to sustain through generations. When speaking about carpets, we would agree that the best ones come from the Middle East, where the position of women is bound by patriarchal norms and gender inequality. No doubt, his rugs are amusing works of art, yet they are strongly associated with the gender issues of the Middle Eastern cultures.

While Europeans for centuries eagerly adorned their homes with the best handmade carpets exported from the Middle Eastern countries such as Morocco, Azerbaijan, Iran, Pakistan, and Turkey, to name a few, I was wondering if gender inequality issues, weaved in by women themselves, could be explored, questioned, and eradicated through the same process? Some women find weaving to be an enjoyable means of passing time and a way of expressing themselves creatively, yet it has never been a feasible form of income generation. But what if we reverse the culture of carpentry through learning by doing or by creating a different design pattern together, in which we connect the traditional craftsmanship and artisan know-how with contemporary digital trends. Meanwhile, we might agree that it is important to be mindful of words, actions, and objects in our homes, which can perpetuate or combat gender stereotypes. To me, only when the conditions are right, can anything be resplendent?