On How to Become a Solo Artist, the Ep “Best You’ve Ever Had”

We know her as Louise Lennartsson from the Swedish pop group, Estraden.
Now she is taking her own magical way in her solo career as a pop artist with the name, Lou Elliotte. She comes with colourful and brutally honest music that takes you by storm. You can hear her characteristic and energetic voice so clear and loud that it makes your heart want to dance. It took her some time to become Lou Elliotte but now she is finally grabbing the music industry by the horns.

Was it difficult for you to go solo after being in a band, how did you get to the point you are today as Lou Elliotte?
It has always been my dream and original plan to be a solo artist making music in English even though I released Lou Elliotte after Estraden.  Estraden was from the beginning just a fun project, not anyone’s plan to start a Swedish band. We wrote one song that we recorded and liked, so we started our band because of that song. Then it just took off and it went so well so I decided to wait with Lou Elliotte. Also, I didn't exactly know what kind of music I wanted to release, I think I needed to grow as a person and find out what I wanted to do.

How does the band feel about you starting a solo career?
They are super supportive and happy for me. Felix and Carl are also a producer team, producing and writing music for other artists, so they have a lot of work to do as well besides Estraden.

In your single ”I Lost” you're talking about how your dreams started to come true but also that you lost something very important, what’s the song about?
I've been singing about my life for the last couple of years, dreaming about being an artist, releasing music, playing live, and writing songs for other artists. I listened to Veronica Maggio for all my teenage years and she was such a big inspiration to me and now I'm working with her. That’s such a big dream come true. When I started to work with her a year ago, that was when I wrote: “I Lost”. Finally being where I had been dreaming of, happy, but not as happy as I thought I would be because I also went through a rough time in my life. At the same time as all my dreams were coming true, my boyfriend at the time and I took a break and I have never felt sadder.

Tell me about your E:P why did you choose to mix new and old songs in it?
I had a concert in 2019 with my band Estraden, at that time we hadn't released enough songs to have a whole concert so we added some covers for the show. “Teenage Dirtbag” was one of the songs we played. I love that song, it has been with me since I was a child and it's really close to my heart so I felt that I wanted to release a cover of it. I had a version that I made with my friend Madelene Eliasson who is a songwriter and producer, she also played with me at the concert in 2019. So we went into the studio and we made a newer version. I had an idea with using vocoder chorus so this 2021 version of the song is with more pop, cuter but still with the guitar, and almost with this, we will rock you-beat.
It's hard to make a cover and keep that same magic that the original version has but still make it your own. You don’t want to make exactly the same but something new. We had the first version that I and Madelene Eliasson made and then we got stuck at one point and didn’t know exactly how to finish it. We brought another producer to help us with the song, Rasmus Budny so we finished it with him and I'm very happy with how the song turned out. Since everybody loves the original version of “Teenage Dirtbag” it makes me so happy when people tell me they love my
cover. I've actually had that song as a reference for Lou Elliotte, especially the verse, the verse is the best verse I have ever heard! As a songwriter, I’m so jealous that he wrote that, it’s so so fucking genius.

What is your best memory about doing your EP?
I have one thing that I'm very happy about and that’s when I made the song “I Lost”. I was super depressed because my boyfriend and I had taken a break so I went into the studio with two of my friends, Amanda Cygnaeus and Madelene Eliasson. I was low and sad and I wanted to write about it because I always write about my personal experiences. That's why nearly all of my songs are about my exes. It was my favorite session and it felt so special. I wrote exactly how I felt, it was right from the heart. I'm attached to that song. I also love that song because it was only us women who wrote it. I have never done that before, of course, I have been writing with women before but I have been making songs for six years and I have never released a song written by only women. That's a very special moment for me. It also reflects how the music industry is, fucked up,  just by hearing that information, like yes I have been releasing music for six years but I have never done a song that is made by only women. That's obviously not the goal that you should only work with women. I just want the industry to be equal. Of course, I wish that this was not a thing. It just shows that the music industry is struggling with equality.

Next song with the band Estraden?
Our next song going to be released on the 4th of February called “Säg Till Din Mamma”. We have another artist collaborating with us on the song but he will be anonymous. That's super exciting!

Is it hard to separate yourself from you as Lou Elliotte and you as Louise Lennartsson from the band Estraden?
No, I feel like with Estraden since we are a band we write about experiences from what we all have been through in the songs but with Lou it’s only me and my experiences so I get to decide by myself. But I definitely feel like it's me in both Estraden and Lou Elliotte.

Where do you find yourself in the most inspirational state?
It's definitely when I'm going through something, when my ex and I broke up I wrote many songs about it. I was crying and being sad in the studio all the time. Tears falling and I'm just saying let's write about this. I love the feeling of making music and being right in the moment even if the moments I find myself in are sometimes really sad or hard. 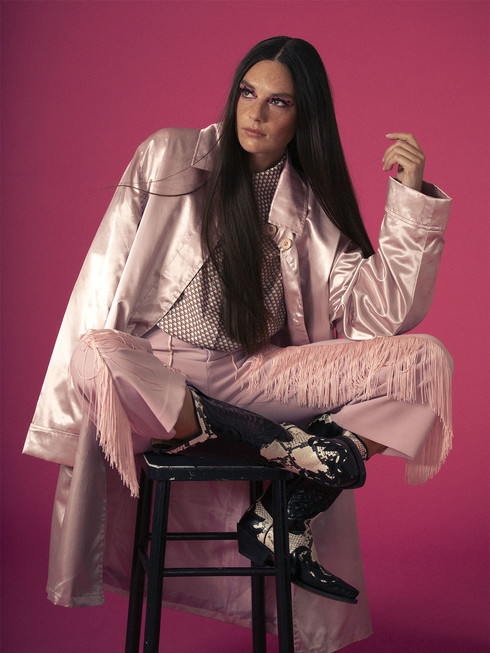 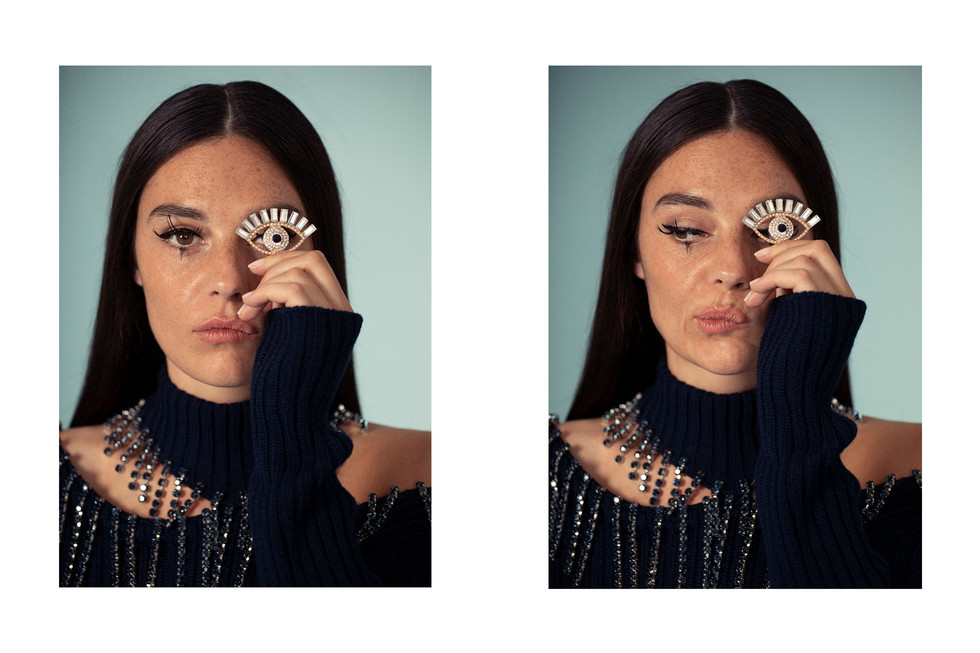 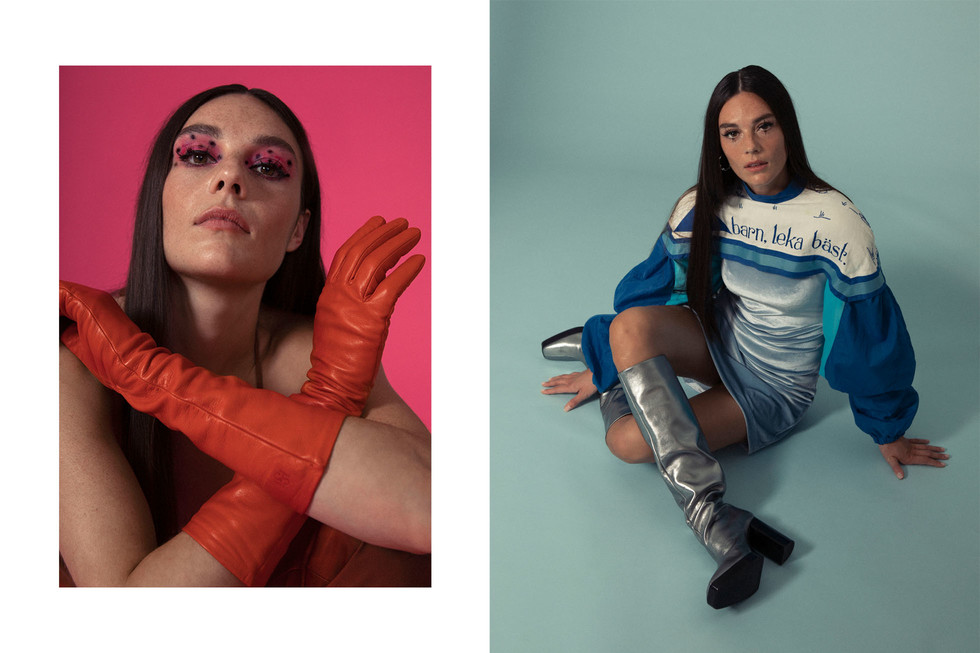 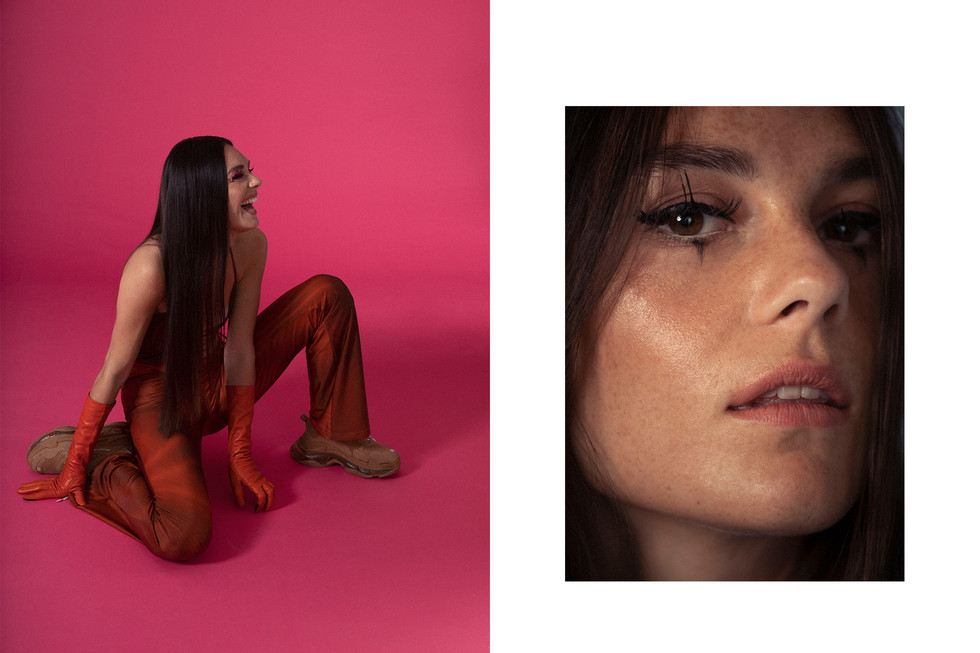