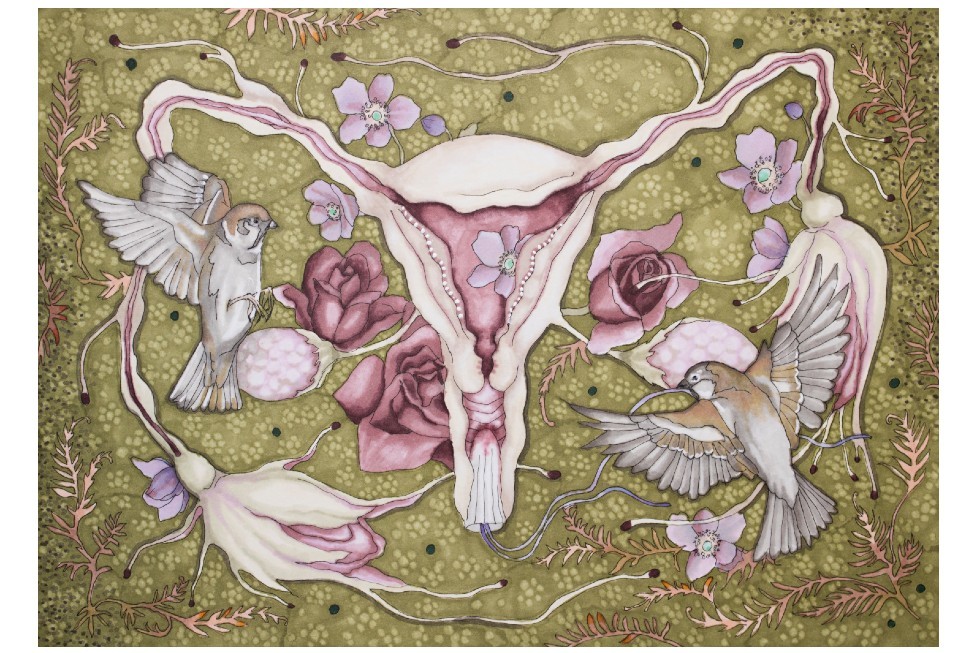 DRAG IT OUT by Anna Orange

“I call myself Anna Orange, but that’s not my real name. I am an artist from Sweden and to make a long story short, I am something called a synesthetes. In my case, this means that I strongly associate specific colors or images with different names. For me, “Anna” has always been the same color as orange juice. And when I went to art school ten years ago, I named my alter ego “the Orange Girl” and painted only in orange or with oranges.

The closeness to nature influences my paintings a lot, often in the form of imaginative allusions to the cycle of nature. The contrast between the beautiful and the frightful is something I constantly return to and explore with my creations.

During the last years, I have worked with the uterus as one of the themes for my art.

This drawing is called “Drag it out” and is part of a series of three that for me personally describes menstruation in a playful and beautiful way.

The birds play with the uterus by being a little wacky and pulling out the tampon. Maybe the birds tried to be environmentally conscious and recommend using a menstrual cup instead of a tampon, and therefore they chose to pull out the tampon…?

In the next drawing in the series there is a menstrual cup, but the uterus in there only wears it as an accessory because the menstruation has stopped.

Above all, this drawing series has been important in order to try and create a sense of acceptance and everydayness over the uterus as well as menstruation. I tried to make the drawing as decorative as tapestry and aesthetically easy to like. For me, the decorative and playful expression is key to attempt to change the feeling of embarrassment many carry and instead replace it with pride over this fascinating organ.”