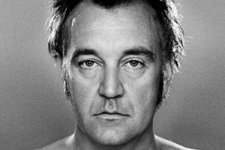 Joseph Cultice began his photography career as a young rock ‘n roll-obsessed teen in Phoenix Arizona where he was inspired by his floor-to-ceiling KISS and David Bowie posters and lots of mescaline. His teenage water-bed dreams became reality when he moved to New York City in 1990 and immediately began making an international name for himself as one of the few leading music photographers whose wide range of talents has allowed him to cross over into the celebrity and fashion fields. His first big break came with nine inch nails, with whom he bonded immediately over similar aesthetics and vision, and Reese’s Peanut Butter Cups. He was also the man behind the award-winning, iconic album cover of Marilyn Manson’s Mechanical Animals.

Joseph Cultice is also an accomplished video director with a best-selling full-length video release feature under his belt, Marilyn Manson’s tour documentary, Dead to the World.

He lives in between New York and Los Angeles with his son Nomi Star, and a refrigerator full of kimchee.

Joseph Cultice loves : George Carlin, the Simpson’s, loud Electro New wave music, torturing people on Facebook with non-sequiturs, peanut butter, Kahlua and coffee, biking in Amsterdam, sunrises, sunsets, long walks on the beach, swimming with Nomi Star, 70’s Playboys, Dwell Magazine, Nick Knight, The New Yorker, Harry Potter, 2001 Space Odyssey, Blue Velvet, Showgirls, Abba, Metallica, Black Keys, Radio Head, Empire of the Sun, Shit Robot, red neon lights, guacamole, waking up and meditating, the smell of coffee in the morning, conversations about f-stops, Alexander McQueen, Madonna, Peaches, St. Martin, salmon roe, his son NOMI STAR, Klaus Nomi, New York in the 80’s and 90’s, other people who hate jazz, double features, the Prisoner, and his mom and dad. He has gotten stoned with Mick Jagger, been hit on by Freddy Mercury, and joined a prayer circle with the Jonas Brothers. He has been told he looks like Bono, Mel Gibson and Johnny Cash but only by people with glaucoma.