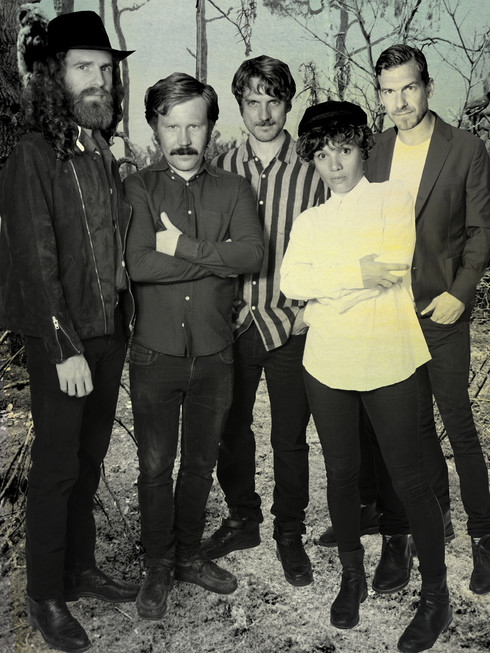 Amason recently released their first album called Sky City and people are already talking about them as a “super group”. I guess it’s because of the members’ backgrounds, or maybe it’s because they have super powers? The five members of the band are Amanda Bergman, also known as Jaw Lessons and Idiot Wind, Nils Törnqvist and Petter Winnberg from Little Majorette, Gustav Ejstes, the frontman of the band Dungen and Pontus Winnberg from the producer duo Bloodshy & Avant who is also a part of Miike Snow.

It’s a snowy morning and I’m the first one to arrive at the studio where I’m supposed to meet up with the band. One by one the members show up, brushing the snow off their shoulders and one has bought a huge cardamom bun. The mood in the studio is post weekend/first day of the week mixed with an eager to catch up since they last saw each other.

FE: How did all five of you meet? When did your paths cross?

PW: Petter and I are brothers so we met quite early in life. Petter and Nils became friends.

Then they saw Amanda play during a gig in Gothenburg.

AB: And then we had a beer together.

PW: Yes, and after that Gustav and I met and decided to schedule a meeting in the studio and just try it out.

FE: So that’s when the idea about starting a band together was born?

PW: Yes, but this whole idea about being a band was for us pretty aimless. We booked a few gigs and then we became this band and then we just couldn’t cancel those concerts, ha-ha.

FE: What’s an Amason? I know nothing about cars, but it’s a car right?

AB: It’s a special type of Volvo from the 60s and it has these very soft shapes.

PW: It has this aura of a romantic picture of Sweden during the 60s and the 70s, but also of some kind of glamorous spirit of the future? But still very down to earth.

FE: Anyone who owns a car like this or has some kind of interest in cars?

PW: I think Amanda is the one who really likes cars?

AB: The weirdest thing happened to me this weekend when I just realized that damn I really love my car. That was such a strange feeling? But it was a great moment.

PW: If you’re going to be tough and hard core car enthusiasts you should go for these cool vintage cars and all that but for me it’s completely the opposite. I like it high tech and secure.

AB: It must have this feeling of a spaceship.

FE: Amason released their first album SKY CITY in January. Tell me about the album!

PW: Yeah, that’s true. We tried a few times and then it felt complete.

AB: It’s a direct reflection of our trying to be a band and we managed to create this record and that feels very good. Now we’ve been born and got some clothes on so next up is to make another one.

AB: Yes, that’s when it all begun but it was in 2013 that we started to play in front of audiences.

NT: It all happened very sporadically. Sometimes it’s been three months without any contact between us.

NT: Definitely. The first time we got the chance to play together for three days in a row it all felt very luxurious.

FE: Then the process must have been very easy and fast since you managed to produce an album in such a short period of time?

AB: I guess we all were surprised, or surprised might be the wrong word since we didn’t expect anything from the beginning, but of course we were happy when the process went smoothly.

PW: In fact the album has existed since the summer of 2014 but in other forms. I talked about this with Peter and I think an album has to be ready 5-6 times before it’s definitive.

AB: Yes, you are filling it with different things and then it’s sinking again.

GE: It’s the same with cornflakes where the packages always tells you that if you think the content is less than its supposed to be, it’s because it all been shaken together.

PW: Think about what would happen if we did that with our album? If it’s not what you expect it’s because it all has collapsed and sunken.

FE: You guys are coming from different backgrounds, how do you combine them in the band?

PW: I don’t think we’re different from other bands, the thing with Amason is just that all of our previous works are for public view.

PW: When you start something up, whatever it is, you always has to feel that freedom.

AB: The good thing about Amason is that everyone has their own experiences and knows how everything works in this business so we don’t have to spend time to figure that sort of things out.

GE: But Amason gives us a lot of freedom since we all have other projects that we’re doing at the same time. Sometimes we create things we never would have done by ourselves.

PW: My view on this is that as long as you don’t throw your stuff out to the audience it’s still yours. But as soon as you start letting it go you have to be prepared to get some kind of feedback, good or bad. Amason is suddenly getting its own life and starts to form something we can’t control. All we can do is to look after this baby and take care of it the best we can. What we can do is to make sure this baby is growing and that we, as parents, stay friends.

FE: What up with all the animals? (At least five songs on the album are named for some kind of animal)

AB: The names have just been working titles and from the beginning… it was… I really need some coffee.. anyone else?

Amanda is running down the stairs.

PW: I guess the names and the animals just came spontaneously when we improvised. Mostly for Amanda who thought that one song sounded like an animal and then we just started to say “yeah that song Ålen (the eel, editor’s note) we played before” so there’s no plan behind the animals.

Amanda comes back and passes around the coffee.

AB: I guess that’s how it is, even though we don’t have a concept from the start its always ends up being a concept. But the animals are just a reference to the way the songs sounded.

GE: The interesting thing is to think about what song would have scales and which one would have fur?

FE: One thing that I really like is that you manage to combine both the Swedish and English language and it still has this cohesive sound. Has this been a challenge?

GE: Well, I always write songs in Swedish so when we brought everything together it all just falls into the right place, so it has never been an issue for us.

AB: It just happened naturally. Most of the songs are made from an instrumental ground and then we add the lyrics just from the feeling we get from the music.

FE: Are you going on tour now?

PW: Right now we’re looking at the summer and we already have some shows booked, like in Norrköping during a festival and one gig in Gothenburg.

AB: Of course we’re hoping for a busy summer with a lot of gigs but you know, there are always these practicalities that need to be considered. But we’re very happy that people seem to like Sky City which gives us more chance to be booked.

FE: So the vision for Amason in the future would be…?

PW: To do more live performances. I don’t think it will take that long until we start thinking about another album… or maybe that’s exactly what everyone is saying? But we have this ambition about to get started on one pretty soon.