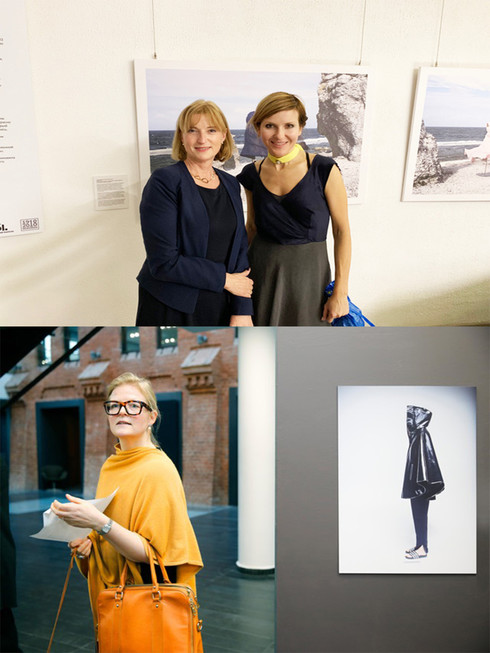 Ingmar Bergman (1918-2007) would have celebrated a century of life this year. Director and writer, who worked in film, theatre, opera and radio, Bergman has created his own universe, which has been widely resonating in the Swedish and international cultures not only during the maestro’s lifetime but with a new force since his death in 2007. These unexpected dimensions have become brilliantly unpacked in the exhibition project Ingmar Bergman and his Legacy in Fashion and Art.

The exhibition takes its beginning from an intriguing proposal to re-introduce the iconic film director Ingmar Bergman through Swedish fashion brands. According to Marie Nyrerörd’s documentary Bergman: Style Icon (2018), the film director would wear the same knitted jersey down to the holes, while the curator of the exhibition Ingmar Bergman and his Legacy in Fashion and Art - Louise Wallenberg - who comes from the film and fashion academia studies – would brand it as the Bergman style, bringing several exciting examples from the Swedish fashion scene.  Together with the fashion artist and producer Ludmila Christeseva, she extracts pieces from contemporary Swedish fashion designers and includes them in the touring exhibition project for the Swedish Institute, suggesting that fashion should become the main component on the way to inspire and connect with other cultures on the worlds tour.
In my interview with Louise Wallenberg, I wondered how she came up with the idea to connect Ingmar Bergman and fashion. In my opinion, he has never been a so-called trendsetter in fashion. Louise Wallenberg explained that she has been previously studying fashion and film costume in Bergman's work - focusing on the creations of costume designer Mago (Max Goldstein): “Working with the curator Anna Bergman for a costume and fashion show Costume versus fashion, which was shown in 2017 at the Slakthusets area in Stockholm, I included both the fashion in Bergman's films, the director’s own style and how Swedish fashion houses refer to him in some specific garments or throughout collections. This was an intriguing part of a larger exhibition on the costume in performing arts (theatre and film) in Sweden, which I later got translated into an international project, thanks to the vision of the exhibition producer Ludmila Christeseva. Beyond fashion, the exhibition’s thematic sections include dance, plastic arts, and films, inspired by the director’s life and art. This is how Ingmar Bergman and his legacy in fashion and art was born”.

Louise Wallenberg said that Bergman's history of film costume is really exciting: “Bergman himself was extremely interested in costume. He was aware of the important role it played in the narrative and visual language of the movies. That Swedish fashion companies explicitly refer to the costumes in his films and praise him, makes it all more exciting”.

Louise Wallenberg and Stutterheim raincoat at the opening of the exhibition.
Photographer: Alexander, Russia.
Further, Louise Wallenberg, introduced the creative process behind Ingmar Bergman’s costume collection: “Bergman paid a lot of attention to the costume design and carefully described his films’ characters in manuscripts. The costume maker knew at an early stage what the characters would look like. In conversation with Bergman, the picture became even more clear. Both Mago and Marik Vos-Lundh, his two main costume designers, have written about it in their memoirs. Mago designed costumes for thirteen movies in the Bergman’s filmography, including the modern and superbly fashionable Persona (1966). Vos-Lundh made costumes for four films, including Fanny and Alexander (1982), which included a great number of historical costumes and is a true Oscars winner.
The exhibition Ingmar Bergman and his Legacy in Fashion and Art includes several fashion garments with the reference to Bergman legacy, as the curator explains. Louise Wallenberg has selected a male jacket from the AW2017 Whyred collection, which Roland Hjort, the creative director and co-founder of the fashion brand, calls the 'Bergman jacket' - a slim cut, stylish coat in navy felted wool. As classical, elegant, and timeless, it perfectly describes the style of the film director. Another Swedish brand, Hope, made a whole fashion collection a few years ago devoting it to Ingmar Bergman and not least to his one of the most iconic films The Seventh Seal (1957). The list of the Swedish fashion brands who refer to Ingmar Bergman’s oeuvre includes Stutterheim, Indigofera and even sunglasses from Sun Buddies. Stutterheim’s black shining rain cape is so very much like the one worn by Death (Bengt Ekerot) in The Seventh Seal. Wearing Sun Buddies sunglasses called “Bibi” one can become as stylish as Bibi Andersson in the film Persona. Hopefully, it does not stop anyone expressing themselves verbally as it happens in the film, in which a famous stage actress, Elisabeth Vogler (Liv Ullmann) has suddenly fallen mute. But it definitely suggests a distinctive way for any woman to express their beauty and style in a mysterious way.

Indigofera has designed a checkered shirt with reference to Ingmar Bergman and cinematographer Sven Nykvist, who would together oftentimes wear this kind of comfortable wear during their work.
The installation view of the exhibition in Paris, 18 October 2018.

With the inspiration from the film, Scenes from a Marriage (1973), the curator selects a randy nightgown from Marimekko, almost the same as Marianne (Liv Ullmann) worries wears that night when her weak-willed husband Johan (Erland Josephson) announces to her that he is leaving her for a younger woman. Besides the fashion visuals, the exhibition Ingmar Bergman and his Legacy in Fashion and Art takes the visitor on a journey through Bergman’s artistic and intellectual heritage, offering a number of thematic evenings with film screenings, workshops, and seminars. The main purpose of the cross-fertilization between the arts, which describes the curatorial idea behind the exhibition, is to unite and inspire in the same manner as Ingmar Bergman’s films do. When this exhibition opened in the capital of fashion, Paris, on the 18th of October, it got the French nickname “Ingmar Bergman: La Suite”. It is still on display at The Swedish Institute in Paris. Choosing Paris seemed to be the proper angle to reintroduce Ingmar Bergman and invite Parisians to discuss Ingmar Bergman’s legacy in contemporary culture.  The different themes in the show are separated from each other by wooden fences, which hide at the same time as they let see through, much like the one we see in Bergman’s The Magician (1958). The travelling magician Albert Emanuel Vogler (Max von Sydow) is hiding behind such a fence and plays with the imagination of the disbeliever Dr. Vergerus, Minister of Health (Gunnar Björnstrand). The play of light and shadow, that the careful choreography of the exhibition offers, ends up in the dialogue with the unforgettable images of the master filmmaker’s film.  In fact, behind these fences, there is a great work invested by a scenographer Marie Strömberg and a group of students from the Jonköping University, which she invited to participate in the workshop in Paris. In a creative dialogue, the students have re-created the director´s home on Fårö Island in the Gotland region of Sweden, and invited Parisians to experience it.

The same exhibition has also recently opened in Minsk, where Marie Strömberg met Ludmila Christeseva in order to inspire Belarussian students through the works of Bergman’s films. Together with the students from the Shirokov’s Institute of Contemporary Knowledge, they watched the Christmas film, Fanny and Alexander, and reflected on the role of traditions in the contemporary culture.  In the middle of the exhibition space in Minsk, Christmas trees were planted as a result of the workshop with the students, curated by the artist Ludmila Christeseva, to symbolize five different female characters of the film. The workshop included Swedish Christmas treats such as christmas must and gingerbreads, preparing the Belarussian audience for the yearly celebration, foreshadowing a good mood and dream come true. The curator’s dream is to bring Belarusian and Swedish students together in a creative dialogue in the upcoming year, started through the Bergman project 2018, said Ludmila Christeseva and Louise Wallenberg.
Bergman project by ”Historia Naturalis”.

The opening in Minsk included a fashion show of the Belarussian fashion brand, Historia Naturalis, a young female design duo Polina Voronova and Larisa Atamanova. Inspired by Ingmar Bergman, the Belarussian couturiers developed a collection with the ingenious use of Bergman's femininity and his “non-male” and rather “homoerotic” gaze. Exploiting the fact of being women themselves and daring to witness both challenge and success, Larisa and Polina have a clear vision of what contemporary woman needs and how she wants to dress her body. While interpreting Bergman's cinematographic prescriptions into their collection, the Belarusians have chosen to address quite an opposite color palette. It bestowed collection with shades of tenderness and sensuality, which created an intriguing dialogue between modern times and postmodern cultures.
Inauguration of the exhibition at the Art Belarus gallery. Here: Sweden’s ambassador in Minsk Christina Johansson and the producer of the exhibition Ludmila Christeseva, styled as Emilie Ekdahl in Fanny and Alexander. 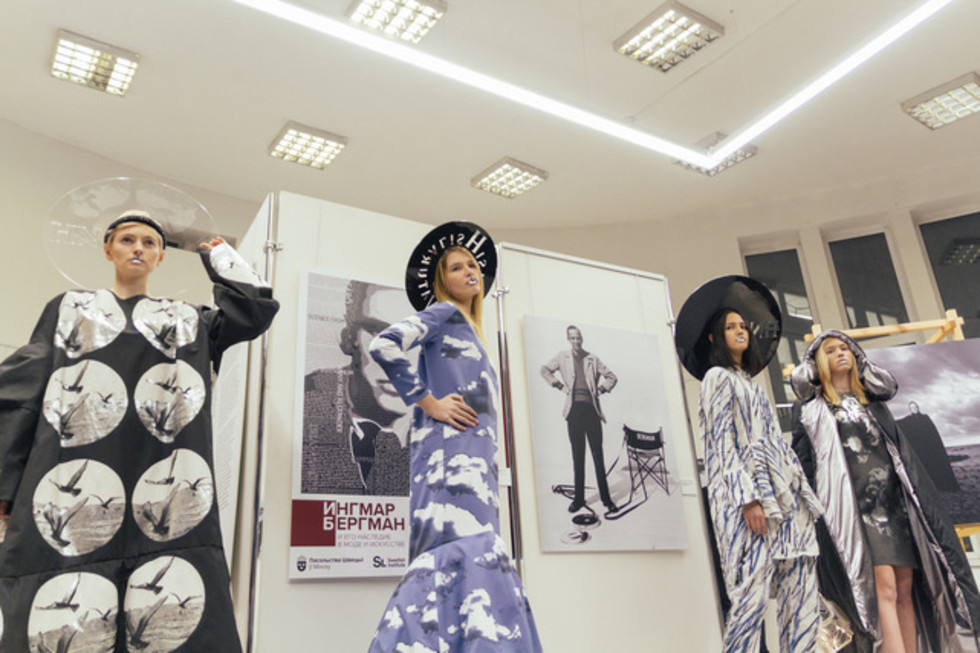 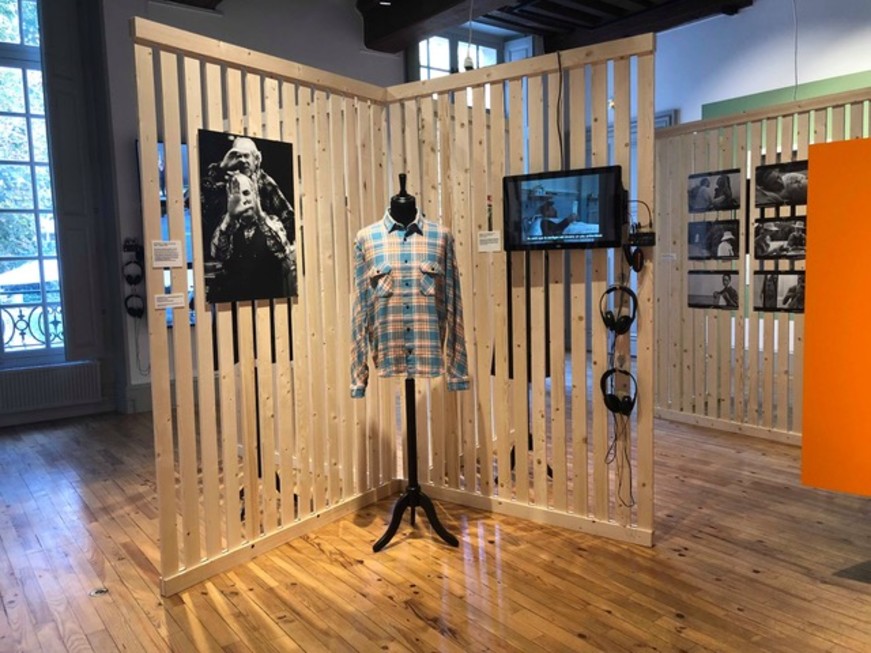 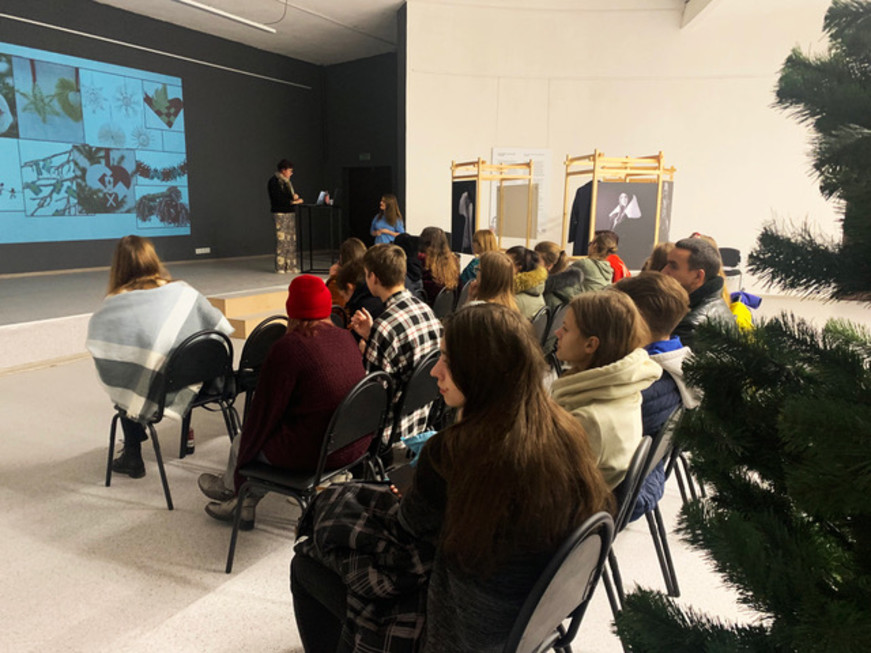