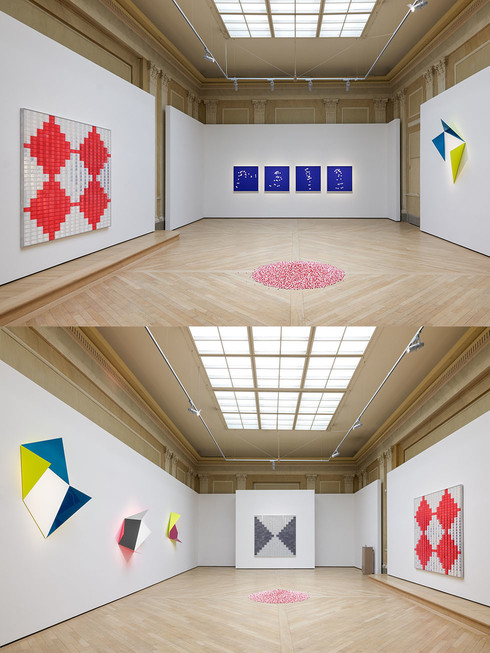 How far can we reduce form and narrative before we prevent it from producing meaning, or being used as a launch pad for new meanings and experiences? In CFHILL’s new exhibition, Rana Begum and Carsten Höller show works that explore questions that were originally posed by the minimalists–and produce new and surprising effects in the process.
In CFHILL’s new exhibition Eccentric Objects, we present two of the most interesting and innovative contemporary artists whose works relate to the legacy of the minimalist movement. The term “minimalism” is quite carelessly applied these days, almost as synonymous with “sparse” or “uncluttered”, often in reference to interior decoration. However, in an art-historical context, it is used in reference to the theorists who took an interest in the new, young artists of that time, a group that includes Donald Judd, Dan Flavin, and Lee Bontecou. This movement was rather a reaction to abstract expressionism, which emphasised the painterly and the ideal of “art for art’s sake”. The minimalists wanted to be more extraverted, and turn to the viewer, as if to say, “see and experience yourself!”
“I’ve been following these two artists for a long time, and their spiritual kinship has always interested me. Rana Begum sensitively emphasises optics, light phenomena, and spatiality, while Carsten Höller has always quested to uncover the potential and limitations of consciousness through a varied succession of capers. To my mind, these are the greatest, most interesting names in a contemporary minimalist movement which aptly captures the current zeitgeist,” says Michael Storåkers of CFHILL.
Rana Begum, born 1977 in Bangladesh, who studied and is based in London, works mainly with sculptures and wall-mounted pieces. Her series Folds consists of origami-like shapes made from paper and thin sheet metal, in which sharp folds produce a fascinating play of light and colour, which varies in hue and intensity when the works are viewed from different angles. This playful balance between shape, light, and colour is inspired by her Islamic upbringing, in which she encountered the beauty of the Quran, her childhood experiences of the sun-drenched landscapes of Bangladesh, and Russian Constructivism and American Minimalism. Rana Begum has previously had solo exhibitions at venues like Tate St Ives and Art Basel Hong Kong, and has participated in many group exhibitions, including Whitechapel’s Is This Tomorrow (2019). She has also made many permanent pieces, which can be viewed in public spaces in cities such as London and New Delhi.
Carsten Höller, born 1961 in Brussels, has become familiar to the wider public in part thanks to his series of large sculptures of mushrooms, and in part thanks to his over-sized slides (Tate Modern, London, and Palazzo Strozzi, Florence). In this exhibition at CFHILL, his works are focused rather on the immaterial aspects that have intrigued him ever since he was a biology researcher, and first began to take an interest in the biological emotions and reflexes of humans and animals. His work Punktefilm (1998) is based on film footage that was used in a scientific study carried out by psychologist Gunnar Johansson in 1970, in which a pair dances in the dark with light sources attached to various points on their bodies. When their contours fade from view, an optical illusion is produced by the moving, abstract pattern of dots. Somehow, the human brain manages to “connect the dots” and detect the movements of the dancers. An investigation into the human intellect’s capacity for abstraction. Alongside the film, he is showing a series of abstract paintings featuring the same subject matter, Dot Paintings (2018), as well as two installations: Pill Clock (2015), in which a mechanism in the ceiling occasionally releases a blue and white pill capsule to fall to the floor, which the viewer can then swallow with a glass of water from a machine, and Smell of My Mother / Smell of My Father (2017). The latter piece consists of nothing but scents, which were extracted using samples taken from clothing worn by the artist’s parents. Carsten Höller’s two most recent solo exhibitions were shown in Danmark (at Copenhagen Contemporary (CC) and Kunsten Museum of Modern Art Aalborg, both curated by Gitte Orskou.