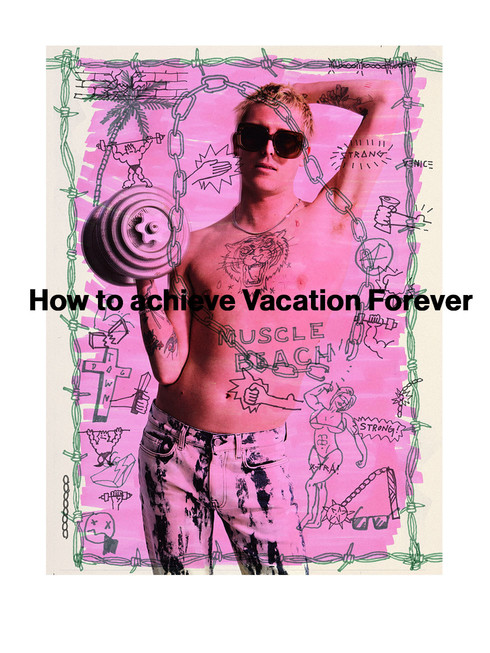 Zacharias Zachrisson aka Vacation Forever, younger brother of Lykke Li, is following his sister's footsteps towards fame. Beginning his career as a drummer in the Swedish band Tussilago he soon discovered he wanted to move on in his own direction. In creating Vacation Forever he was able to do all the things he’d been longing to do by himself and for himself.
In July 2018, under the American Producer Jeff Basker’s label “Kravenworks”, he released his self titled solo debut EP.
Vacation Forever is the hope and the future of Swedish indie music and one of the most exciting acts in the scene right now.

Where does “Vacation Forever” come from, and what does it mean?
I decided to go to India for a while after I left Tussilago. I was sitting on a terrace when this guy suddenly walked up to me. He said he’d been checking me out for a few days and thought I seemed like a cool guy. He asked if I wanted to smoke DMT, which is kind of like Ayahuasca. I was a bit startled right there and then and all i could reply was “okeeey, sure”. He told me we would meet up the following day and that he would take me out into the jungle.
The next day while out in the jungle, smoking DMT, I tripped harder than ever before. I traveled through different galaxies and dimensions. Waking up from this trip I was in shock. It felt like I was stuck in a molecule, floating through the jungle. Like I was one with the jungle. That’s when I came up with the name. It felt like I was on a Vacation Forever.

During my research I found out you suffer from stage fright. How do you cope with this?
My stage fright isn’t as bad as it used to be. I always assume I will do terribly when I'm on the stage. To overcome this fear I rehearse a lot to program the set into my muscle memory. This helps very much as I know no matter how nervous I get I will still perform well. I've had panic attacks just seconds before I go on stage, but still made it through the show thanks to all the rehearsing. Now I’m aware I can handle the pressure, no matter how hard or strong the feeling of failure gets beforehand.

What feeling is the most important for you to convey in your music?
I don’t know if I can say there’s a specific feeling I wish to convey with my music. But most of it has come from a time and place when I’ve been at my very worst. I feel much better as a person now, older, wiser etc. A lot of my songs are about my journey as a human being and how I’ve wrestled and dealt with my inner demons. And even though I’m in a better place today, there’s still traces that remain.
In short I guess it’s important for me to convey that you’re not always in a place in life where you want to be and the struggles of how to get to your next point. Also to show my own growth and development which I’ve not always reached in the prettiest of ways.

How do you see yourself as an Artist? Are you very critical of yourself and your work?
I have a very complicated relationship with myself as an Artist. Oftentimes I don’t see myself as an Artist even though I know I am one. I love to create and to be in the studio more than anything. But in the end I get very critical and hate almost every song I ever made. If I’m at a party for example and someone puts on a song of mine I leave immediately.
I love what I do, but sometimes I make music without any desire or intentions of releasing it. I do it because I feel that I have to follow my goals in life, and sometimes just to feel that I am actually doing something.

Do you think your sister’s fame has anything to do with your level of satisfaction when it comes to your own music?
Maybe subconsciously. It’s not something I go around thinking about. We do such different things and I don’t want what she has. It’s not where I see myself. She’s a pop star and that works great for her. I can’t compare myself to that as It’s not what I wish for. With that being said, as my whole family are successful musicians I do somehow feel pressured to succeed. It’s not the most important thing for me per se, but of course it’s nice to thrive in what you love and what you do.

Who is your target audience? Who do you want to reach?
I'm happy if anyone gets me and my music. It's obviously nice to reach out to as many people as possible. But as I don’t like, or strive to be commercial, that won’t probably happen. I don’t want my music to become this “product” created by twenty different producers only made to sell. That is not how I see myself and my work. But obviously it’s nice to make money from something you are passionate about, like music. I’m content if I get to tour with my music. If I book a gig in Berlin, I’m satisfied.

What do you do when things get too hectic? Do you have a special “Happy Place”?
I love to be alone in my bed or to ride around on my skateboard and collect my thoughts. But my absolute favourite place to go to is my childhood home in Portugal where I grew up. It’s located right in the middle of the mountains. With nothing but emptiness around. That’s the place where I can really find peace and time to just breathe.

What kind of music do you listen to?
I like music that is not too easy to comprehend. I like music that demands a few listens before you understand it..
I love noises and when it grinds my ears. When you really have to “listen” to get it, or find the feeling of the song.
My favourite band is called “Television Personalities”. It’s a British Post-Punk band. It’s from them I take a lot of my inspiration.

Do you have a favourite item of clothing right now?
I have a huge love for my Dickie’s trousers. I wear them every day. They’re perfect for skating and they never seem to rip. I also love band-merch and wear it quite often. Dickie’s and merch is my go to you could say.
I’m very fascinated with hats with fake animal ears on them. I finally found someone that can make one for me, and I’m really excited about that. I can’t wait to get it!

If you could be anyone else for a day, dead or alive, who would it be?
As I’m a big fan of history, one person I would love to be for a day is Marie-Antoinette. I would love to experience her life when she was at her height. With all the parties and all the different men she fooled around with. Get to discover her lavish and extreme way of life and the abundance of all of her luxurious things she possessed. It would be so cool to live in that extravagant palace she called a home. 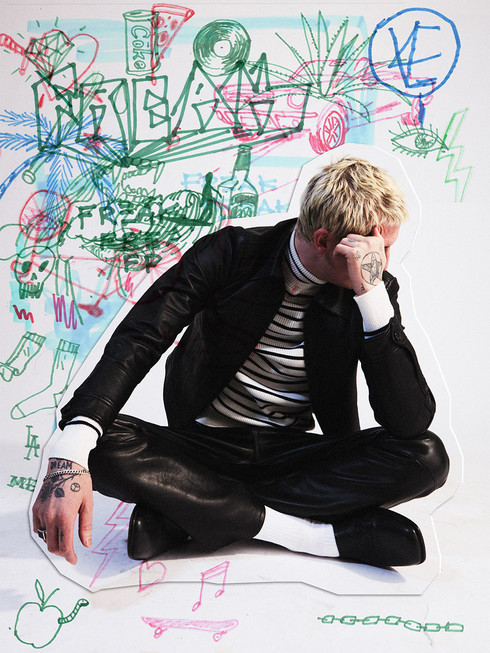 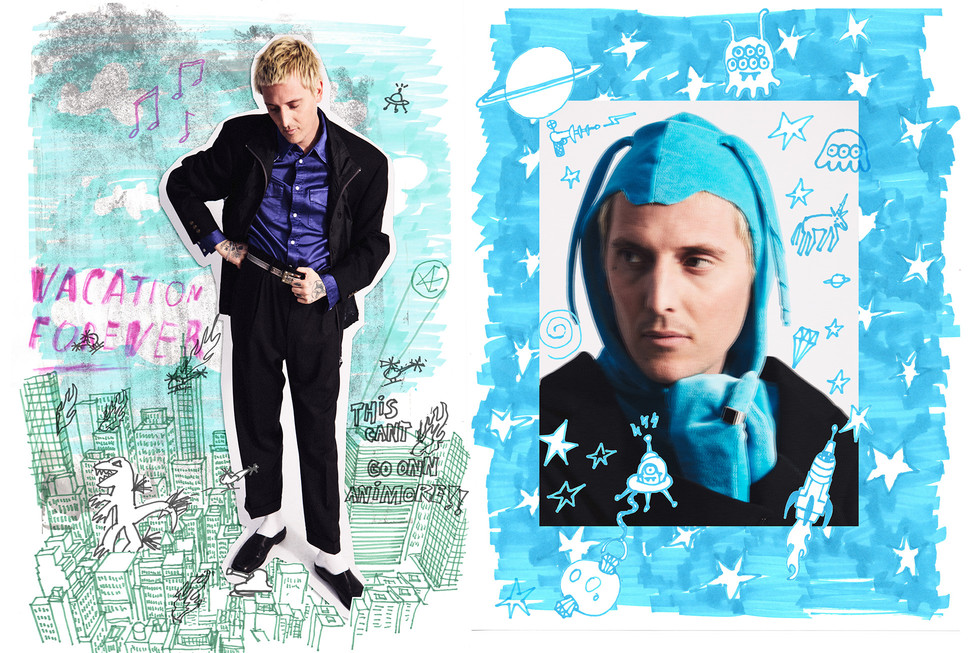 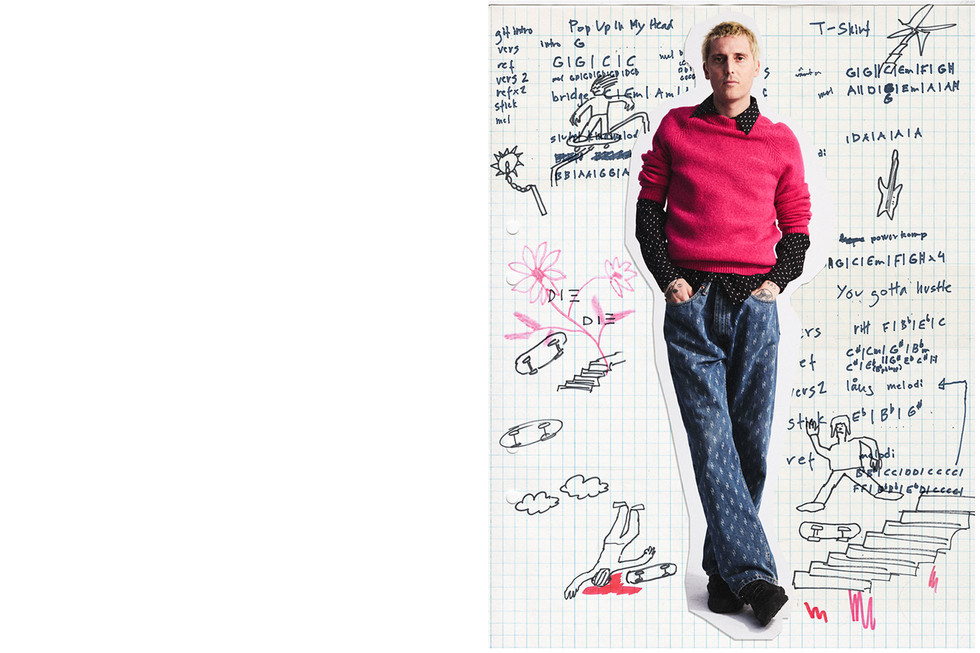