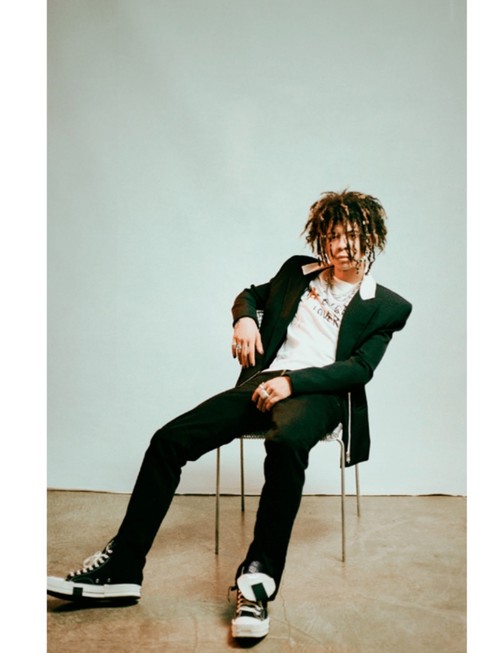 From fashion and chart-topping music collaborations, to bowling and how a nail technician helped to up his style game; “Mood” singer iann dior invites Odalisque into his world, and it’s a place of wonder
There is a saying that the third times the charm, and after a series of scheduling snafus that derailed our interview plans, on the third try, I was able to finally meet iann dior on Zoom for Odalisque.
At the risk of sounding like a fan girl, the conversation with dior hit different. I’m not jaded, but I’ve interviewed many of the great and goods of modern pop culture, so for me to say that this tete à tete with iann dior was a breath of fresh air that left me wanting more, is a BIG statement.
Not only did we have the camera on for our Zoom meet-up, but in a throwback moment worthy of “MTV Cribs”, iann dior took me on a mini-tour of his Los Angeles home, dear reader, walking me through his tidy house to show off his favourite colourful giant pillows designed by the Japanese artist Takashi Murakami, as well as his precious new beauty- a white electric piano that has pride of place in his living room.

“My piano just arrived, so I’ve been nerding out on music theory and figuring that part out of music because before, I was just focused on vocals. Now I’m very interested in break-ing down the track and knowing every single detail,” he says. Dior has also bought a guitar and tells me that he is learning how to play that too. “I want to be able to pull out my guitar on stage and perform for my fans, that was one of the main reasons I picked up guitar. I want to be able to play by ear and to play what’s inside me”.
Although iann dior is a hip hop-rap artist, his music spans a variety of genres. He’s released songs with Lil Baby, Machine GunKelly, Travis Barker, Clean Bandit, and TrippieRedd among others.
Born in Puerto Rico and raised in Texas, the 23-year-old artist whose real name is Michael Ian Olmo, has already proven that he is a musical force to be reckoned with. Maybe it was destiny, and his parents stacked the odds by choosing to name him after Michael Jackson.
In 2019, the first song dior wrote and uploaded to Sound Cloud went viral, garnering 10,000 plays in its first week, his uniquevoice and sad boi vibe clearly resonating with fans.
dior gained momentum in 2020, when his song “Mood” went platinum (four-times) and was at the top of US Billboard Hot 100 for 10 weeks.

“Everything is happening exactly how I wanted it and expected it to be. It’s safe to say that a lot of my dreams are coming true at the moment,” he tells me, reflecting on the past 24 months.
The multi-hyphenated rapper refuses to be pigeon-holed and is trying his hand in diverse arenas: he’s now a model, and the face of MCM’s Spring/Summer 2022 fashion campaign, while his song “let you”, from his newly released second album “On to Better Things”, is the sound of the season for MCM as well. “The MCM campaign is something that I wanted to do for a while, so it’s very exciting that I got to do that,” he says.
He’s also tried his hand at jewellery design and his sold-out collab with Toronto-based jewellery company Vitaly has left him eager to try his hand at more things in the design world.
“The fashion stuff is what I’m really excited about right now. I love fashion, and I’ve quietly working on my own line. You’ll know more about it when I’m ready,” dior says.
The artist also has plans to flex his acting chops soon.
“I’m going to make my acting debut this year, I’ve already decided”.
The recent death of someone he cared about, and some hard truths from his best friend were catalysts for dior to start making healtheir choices.

A few randomand rapid-fire questions for iann dior:
Q: Sneakers or boots?
- Sneakers. There are a lot more sneakers than boots out there that I like. I can wear a pair of Converse with anything. Although on stage I love to wear my Prada boots when I perform, and my Bottega boots are also fire.

Q: Beach or mountains?
-Mountains. I was born in a hot place, but the cold can be paradise, too.

Q: Car or Motorcycle?
-Motorcycle. I just bought a motorcycle but I hadn’t gotten a chance to ride it. I took it out for the first time and there was gravel on the road close to the house in Malibu. I wiped out, because I didn’t know that gravel is your worst enemy on a motorcycle.

Q: What’s your favourite thing to eat if your mom is cooking?
-Arroz con gandules, platanos, chuletas, basically everything she cooks I will eat. Mom is a great cook, but I can also chef it up in the kitchen if I have to.

He took some time off and went to northern California to learn snowboarding. Now back in Los Angeles, dior tells me that he spends most of his time in the studio making music.
“Everything that has been going on in the last month really opened my eyes, and I see all the possibilities. I’m really in a groove with my music right now, and since I stopped smoking my voice sounds a milliontimes better,” he says.
Spanish is his mother tongue, and when I ask him if we will ever get to hear him on some Spanish language tracks he smiles and says: “I’m working on a few things. The next album is already in the works and I’m definitely making the best stuff I’ve ever made. I will definitely drop something in Spanish when the time is right.”
The number of things that dior is exploring gives the impression that: 1) he likes to keep busy,  2) he is like a kid in a candy store, hav-ing the time of his life while pushing himself in every direction, and 3) he’s sprinting to try everything that catches his fancy. But then I remember that he is only 23 years old, after all, and life is full of possibilities and opportunities.
“I’m from a small town, and even as a kid I wanted to explore and do stuff. Los Angele sis not a normal place. I like doing little activi-ties and things that are very normal, so I go bowling, and I like mini-golf. I randomly got into archery and I have a set-up in my backyard with targets, so I’m out there practicing a lot. I just went surfing for the first time, and snowboarding is a new thing for me, too.” he explains.
However hectic his day-to-day life seems at the moment, it is about to get even more busy come summer.
“I will be going on my first arena tour. I’m super pumped about that, supporting Machine Gun Kelly, and I’m going to get to play my dream venue, Madison Square Garden. That’s going to be beautiful,” iann dior says

As planning is underway for the tour there is one element that dior is already certain about: his nail technician.
“I was in desperate need of some fire nails and I heard about Zola, my nailtechnician. She is so good. She can literally turn any idea into nail art. It really lifts my whole look to have that nail art. At the moment I have the name of my album, and my name and some meaningful symbols on my nails, but there is always something new that I want to try” he says.
As our allotted time winds down iann dior says something to me that makes me realise why this interview left me wanting more: “Get my number and hit me up when you are in LA. You can come over; we can cook food and get our nails done together. You really need that Zola nail experience in your life, so you can see what I’m talking about”. 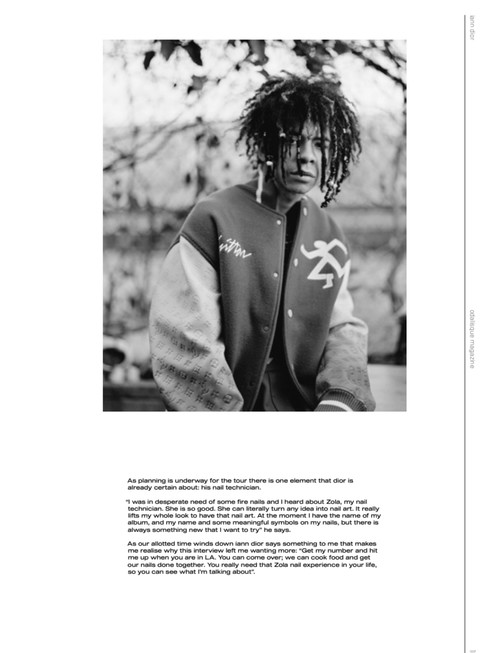 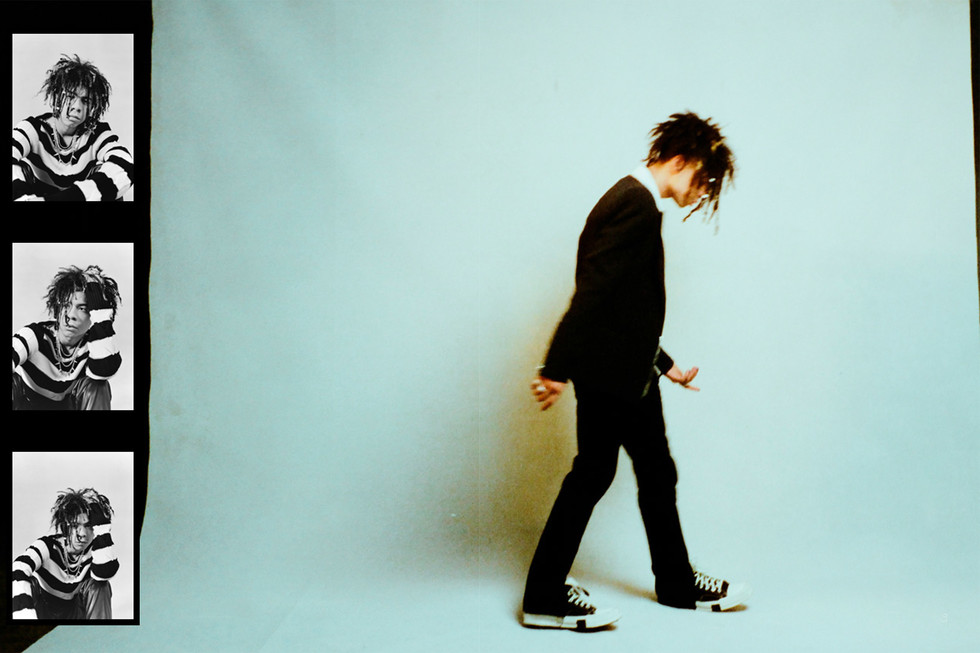 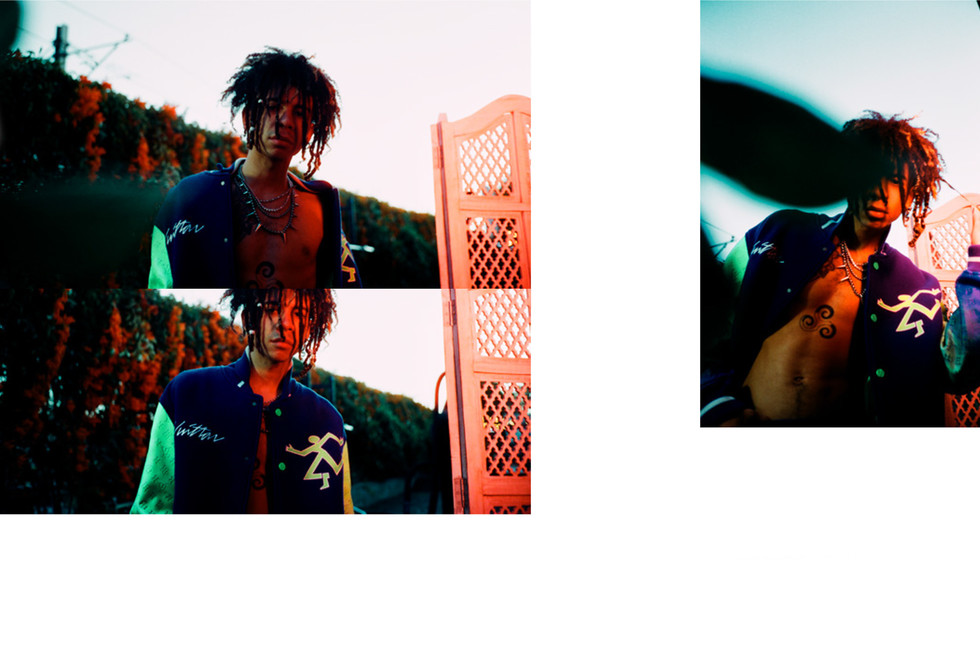