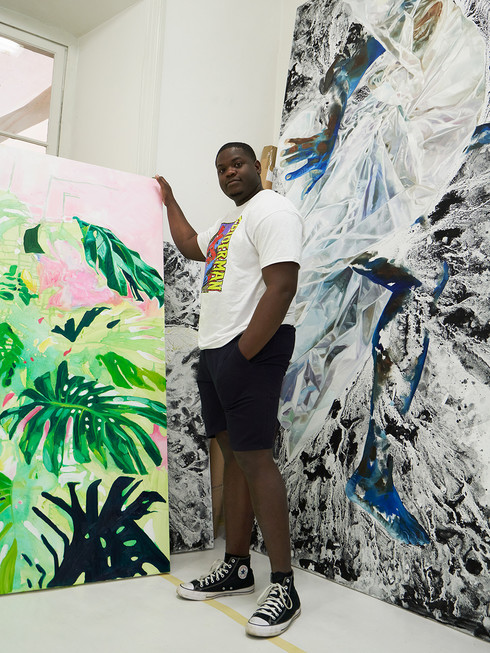 Khari Turner arrived in Stockholm straight from a celebrated international debut exhibition at the Venice Biennale to spend a one-month artist residency in the city. Much like Venice, Stockholm has a unique connection to water as it is positioned on fourteen islands linked by fifty-seven bridges. Art editor Lina Aastrup met him in his temporary studio to talk about the upcoming exhibition As Below and Above.

Lina Aastrup: The focus on water, is that a recurring theme for your practice?

Khari Turner: Yes, I use ocean or sea water and mix it with black ink. So, the ink follows the water as it flows until the water evaporates leaving behind this very unique texture that is the base for all my paintings, so materially it is a big part of my process. The topic isn’t always about water though, it can also be about plants for example, finding yourself amongst the trees and feeling small in a vast landscape. However, water feeds the plant so basically you could say I am interested in whatever water touches, which is a lot. Sand, wood, plants, humans.

LA: Water as a source of life maybe? This makes me think about Astrida Neimanis’ theory of hydrofeminism in which she states that we are all bodies of water and as such we are connected through the fluids we share. In Bodies of Water (2017) she wrote this which I think is so beautiful:

“For us humans, the flow and flush of waters sustain our own bodies, but also connect them to other bodies, to other worlds beyond our human selves. Indeed, bodies of water undo the idea that bodies are necessarily or only human. The bodies from which we siphon and into which we pour ourselves are certainly other human bodies (a kissable lover, a blood transfused stranger, a nursing infant), but they are just as likely a sea, a cistern, an underground reservoir of once-was-rain.” Astrida Neimanis, Bodies of Water, 2017.

KT: That is literally what I am working with. Thinking of ourselves as bodies of water, how our bodies are largely made up of water and also how water travels. How it moves to locations, what is in it, and what the history of that water is.

LA: Speaking of historical perspectives on water, I was reading about “voyage iron” which was used as a currency in the transatlantic slave trade, and it was largely produced in the north of Sweden in the 17th and 18th Centuries and shipped by boat to West Africa. Literally travelling the waters outside Stockholm. For many Swedes, who often like to think that Sweden was not involved in the slave trade, the human cost and political impact of this trade is not so commonly known.

KT: I think everything can become a political conversation in one way or another. For a long time, I tried to fight that in the artwork. There was a time when I thought I would go really political in my work, but then I realised that some people are not ready to have that conversation. And the people who are already having it are making work mostly regurgitating what they already understood. So, I decided I would not do anything political, but anytime I try to present something not political, people would read this or the other into it, so politics is still something I need to relate to. As it turned out, water became a good conduit of that as there is so much history, there is so much potential in terms of talking about, for example, what the transatlantic slave trade means, what water I’m using, where I’m getting it from. This way I can paint freely and think about how the body of water is now reacting to the space that it is in, allowing us to have a conversation about that means for the painting. And I say “us” as in me and the water because I think of it as its own thing. I can only ever manipulate it so much, because however it dries, or looks, is about what the water decides in the end.

LA: So, you use sea water taken at the different sites of production in your paintings?

KT: There is water from Sweden in all of the works I created for As Below and Above. For me it is a way to think about place, and my personal space in it. This show is specifically about vulnerability and my imagination of what it feels like to be an artist, to be me, at this very moment. Coming from the Venice Biennale I was inspired to push myself to be more vulnerable. To go beyond my comfort zone and tell a better, more interesting story about where I come from. Like asking: What is masculinity, how do I break the mold of that? The show in Venice, Blue Moon, was an opportunity to honour some of the femme presenting bodies in my life. This new show is softer around the edges, more emotional – not in a sad way, but deeper.

The regular Odalisque reader will recognize Turner from the “Renaissance Issue” (s/s 2021) where we published a conversation between him and Destinee Ross-Sutton, curator and founder of Ross-Sutton Gallery in New York. As Below and Above marks her second collaboration with CFHILL, the first being the internationally acclaimed exhibition Black Voices/ Black Microcosm in 2020, right at the beginning of the pandemic and coinciding with the massive BLM protests following the murder of George Floyd in Minneapolis on May 25, 2020.

As Below and Above by Khari Turner will be on view at CFHILL in the Main Gallery from June 3 to July 8, 2022.

Khari Turner (b. 1991, Milwaukee, US) received his MFA from Columbia University in 2021. Other exhibitions by Turner currently on view: “Mirroring Reflection”, solo exhibition at Museum of Wisconsin Art (MOWA) and “Blue Moon” at Palazzo Bembo as part of the Venice Biennale 2022. Represented by Ross-Sutton Gallery in New York. Lives and works in Harlem, New York. 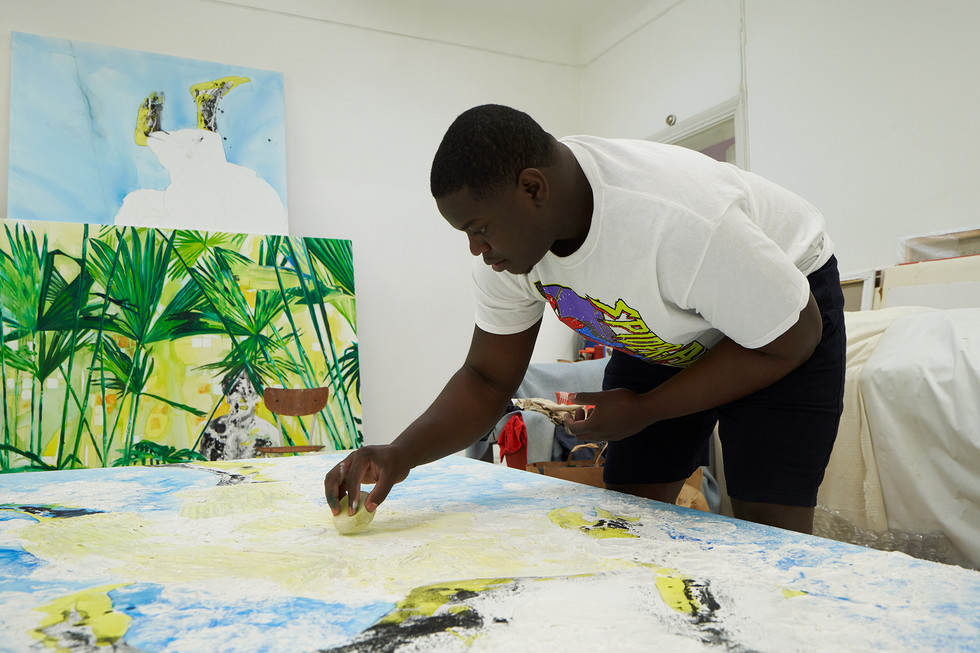 Khari Turner at the studio in Stockholm. Image courtesy of CFHILL and Ross-Sutton Gallery. 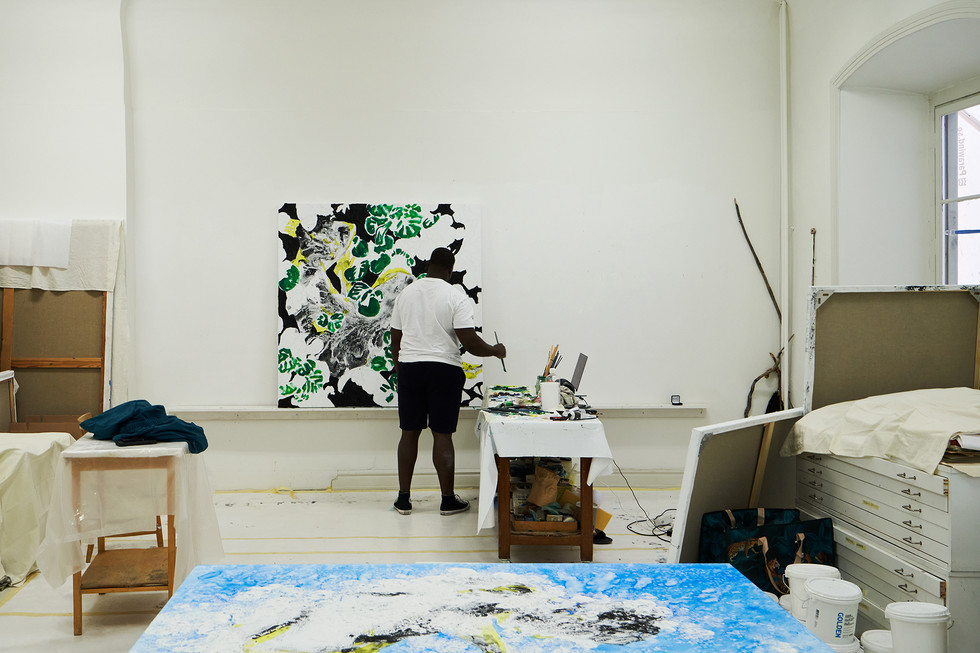 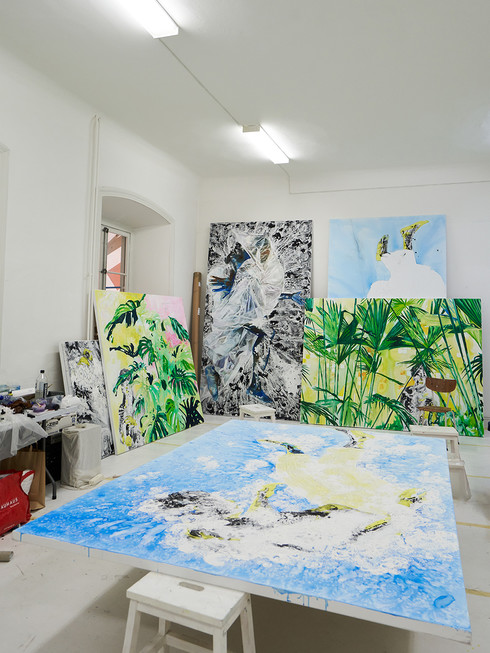