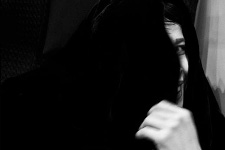 Paulina Otylie Surys, born1979 in Poland, is a fine art and fashion photographer based in London, UK. Only recently she has launched herself as a fashion photographer.
Paulina studied at the Academy of Fine Arts in Poland where she developed her skills and her distinctive style as a painter. Following her studies, she discovered photography to be her preferred medium for its unique ability to capture a moment in time ; she could, however, be considered a photographer, painter and art director in equal measure.

She has an extensive range of influences and interests covering all areas of art history, assisting her in constructing works that are highly original yet possessed of a classical sensibility; it is her interest in the old that fires her experiments into new artistic territories. Her works exemplify this juxtaposition of the old and the new; using entirely analogue equipment and early photographic techniques, she presents subjects in a thoroughly modern and innovative way (using, very often, items from fantastic contemporary designers that complement her own aesthetic tastes and interests). She is a lover of experimentation and creative adventure; each shoot is different from the last as she amasses an archive of ideas.

Paulina seeks something personal and special from all whom she photographs and she possesses a rare ability to draw this from them (coaxing expressions that display the very essence of the subject’s self). This yearning for an insight into the soul is a large feature of her work and often results in images with a rather morbid feel, where the subjects possess a look of having crossed over from life.

“All photographs are memento mori. To take a photograph is to participate in another person’s (or thing’s) mortality, vulnerability, mutability. Precisely by slicing out this moment and freezing it, all photographs testify to time’s relentless melt.” - Susan Sontag

The essence and aesthetics inherent to Paulina’s photographs require her to approach each shoot as an auteur. She follows her initial idea (sometimes entirely her own, sometimes based on a theme given to her to work with) through all the stages from planning and organising the look of the shoot and the set design, to developing the photographs , and eventually to hand painting them using a combination of toners, chemicals, waxes, inks and dry dyes. The results are the product of a truly undiluted artistic vision. Her photographs have been described as otherworldly and as existing somewhere between fairy tale and nightmare, while the influence of classic photography and painting remains ever evident.