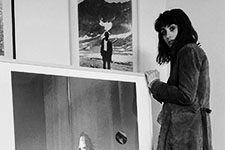 As contemporary art seems to become more text orientated, Sanja Marusic moves in another direction: ‘I think in images, not in words.’ An attitude that rebels against the current zeitgeist.

At age seventeen Marusic won the ELLE Photograhy Award and was admitted to the Royal Academy of Arts. She graduated as one of the youngest students, with an Honorable Award. She also won the Photo Academy Award and has been building on a diverse, substantial list of clients, both household names in journalism and fashion, and independent international platforms. In 2016 her Flowers in December series was publiced in the New York Times. She shoots portraits and album covers for musicians, and shot campaigns for La Monnaie (the national opera house in Brussels). She moves effortlessly between commissioned and non-commissioned photography, switches easily between clients like ELLE and Foam Museum of Photography.