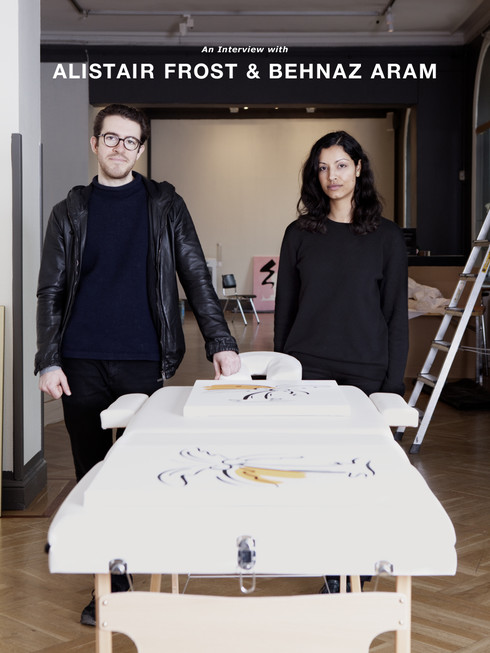 Fire Sale is a collaboration between artist Alistair Frost and designer Behnaz Aram. It is Alistair’s first time in Sweden and Behnaz first time curating.

The day before the opening I sit down with the two of them at Bukowski’s auction house.
We talk about the color pink, pears and how designing clothes and painting canvases are just two different ways of expressing yourself artistically.

So the exhibition starts tomorrow, tell me, what are we going to see?
Alistair: There are some new paintings that I’ve made during the last couple of months and then there’s some work from last year. There are also a few paintings from an exhibition I had in Scotland and some from Copenhagen.

Tell me everything from the beginning, tell me the entire story.
Alistair: Ok, where do I start…
I guess what we’ve got here are these kinds of signs and symbols, kind of like contemporary life, or stuff you might find as graphic design, or on web pages or in text messages, things that are just out there, but very generic. And then they are re-configured and put together in different ways that creates a kind of semi-language of stuff. That is on the one hand quite celebratory of that kind of thing, of lifestyle and art, but it’s also on the other hand slightly cynical, kind of like laughing at everyone else but at the same time at myself too.

We are sitting in the middle of the exhibition space, surrounded by Alistair’s art, the pieces have not been hung yet; they are standing on the floor leaning against the walls. We decide to talk about a few of them specifically. The first we talk about is a series of three cotton candy pink ones, just across the room.

Alistair: All these pink ones, they all go together with a water cooler and they are going to be filled with vodka and pink lemonade. So you have this color pink, it’s almost as if the pigment of the paint is being transferred and put into the cooler for drinking.
I’ve done a lot of work that has to do with bars and opening nights, you know, when everyone is kind of strutting around with martini glasses and that kind of thing. So this is a way to bring in that element, the sense of an opening night but making it a bit wrong, something that is not quite right.
So we have two items that go with each other, the canvases and the coolers and then in the paintings there’s also a doubling up of imagery. One of the paintings has two pears on it. You know it’s a joke, a pair of pears. It’s quite dumb and stupid but then you have it with this calligraphic mark that makes it look fluid, easy and light.

Alistair points at another painting; it says the word two on it and is split up in two images. He explains them as a still of when you swipe an image across the phone, but instead of a phone he does it with the canvas. There is a strong digital reference to most of the work, reminding us (at least me) of how disabled one feels without access to a computer or a phone. There is also a clear Miami vibe going on with a couple of the pieces, especially the pink ones.

Alistair: All of the paintings I have been working on for the last few years are created while taking generics, like clip art and stock illustrations, to play around with, to draw on and repeat.

Behnaz: The things is, there are some artists that when they do something it looks rough and it feels rough, your work is kind of cynical as you said, but also it has this lightness to it combined with color blocking and hard lines, the soft pink and the sharp black, it is a lot about contradictions.

We have a small chat about color, to state that the three of us are all dressed in black. Every year there is a new black says Behnaz.

Behnaz: Speaking of Miami, when I went to the Basil art fair last summer, it was so nice to see the new art, it was kind of optimistic in a way, the paintings, the installations, sculptures and the video installations, everything was in a way hopeful. Usually a lot of artwork is dark, the end of the world, judgment day, Armageddon feeling. I think around year 2000 or 2001, I was trendy to be a bit dark and heavy, kind of like, me and my issues..

Alistair: Yeah, that’s kind of the opposite of what I am trying to do.
I would absolutely not want to be in the end of negative.

I ask Behnaz how it has been to work with art pieces instead of textiles.

Will you be able to use this experience in your design?
Behnaz: Definitely! I always get inspired by art, everything I do, either fashion or costumes; art is a big and important element.

Alistair: It’s all about being creative. Someone asked me once, how is what you do different from being a graphic designer?
And I answered, you know, in one way it is not. I mean, I use the same tools, the same language, I just happened to present it in another way.

One of the most important things during the event is that the people should have a good time says Alistair, serving pink vodka and all. I am feeling very satisfied with our talk and I know they have a lot of work left, so lastly I ask Alistair, what do you think about Stockholm?

Alistair: What I think about Stockholm? It is great and… very cold. 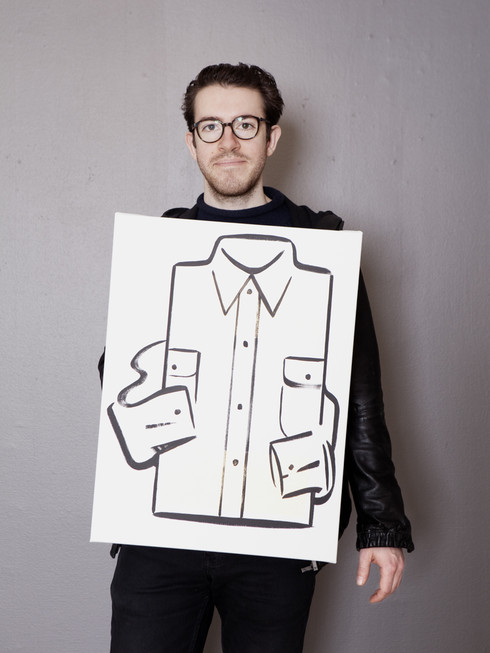 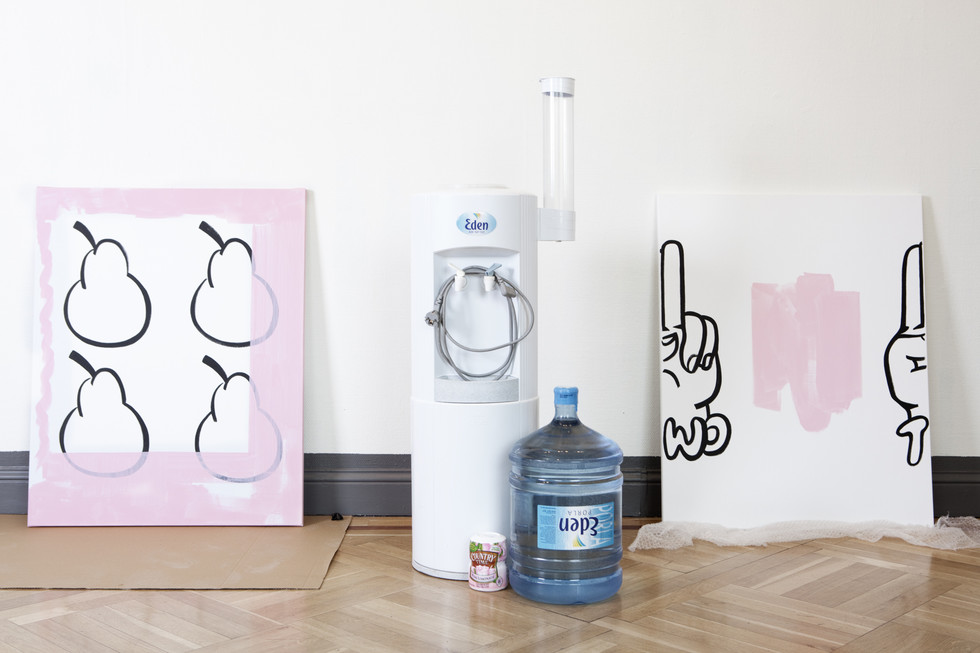 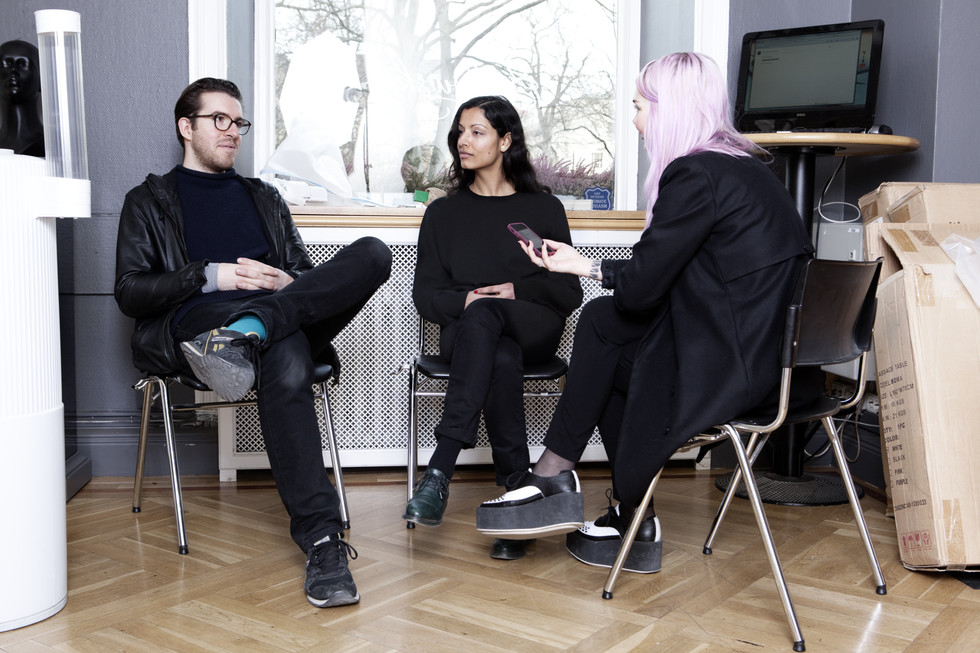 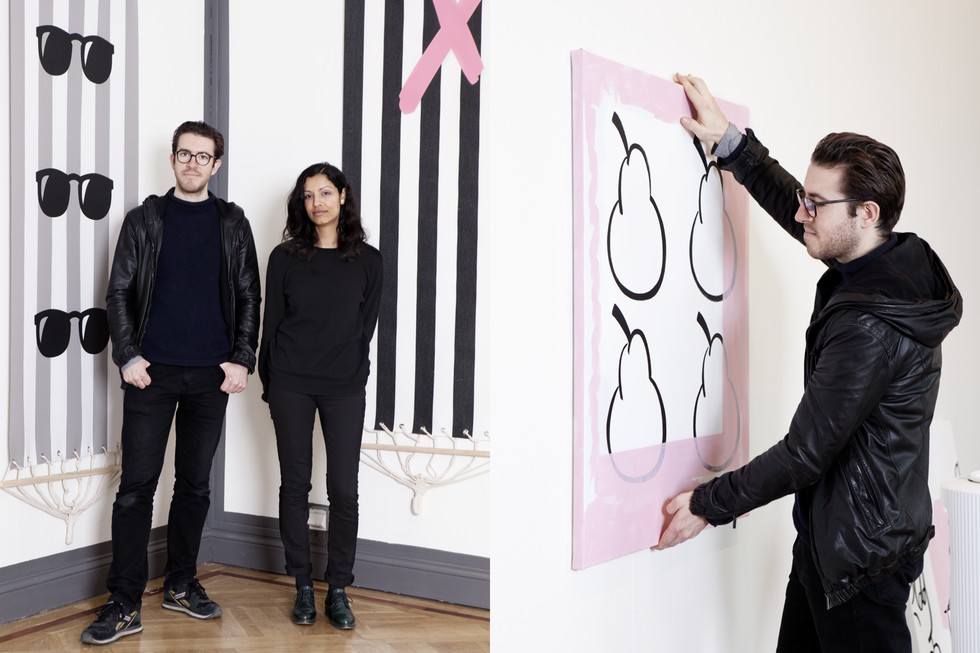