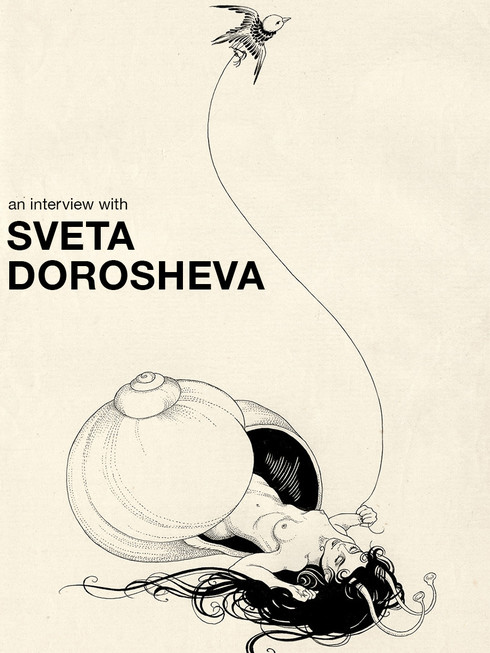 Born in Ukraine but living in Israel, Sveta Dorosheva is inspired by the medieval and retains influences from 18th century artist’s like Edmund Dulac and Harry Clarke. Fascinated by the minds of children, Dorosheva creates alternative worlds using ink and paper.

First, tell me what’s happening in Rehovot, what are you doing today?

It’s a beautiful sunny morning; I’ve sent all the kids off to school and kindergartens. I am having my morning coffee and procrastinating before starting a new project by answering these questions. Thank you for giving me something better to do than housework to fill in this little break. Usually I work during morning hours till noon, after that the kids return one by one and I work as mom till night time. After they go to bed, I have a second shift of drawing time.

What projects are you working on at the moment?

I have several commissions in various stages of development. They are a marvelous diversity: reinterpretation of two Tarot cards; poster for a mystic puppeteer and entertainer; personal campaign for a book store, dedicated to literature and dreams; and a new deck of trick cards. That pretty much contains ‘a few of my favorite things’ - mysterious emblems and alchemy, eccentrics and eccentricities, fable, magic and trickery.

You were born in Ukraine, how come that you moved to Israel?

Ah well, that’s complicated :) My parents moved to Israel, when I was 18 and I stayed at home, because I wanted to finish my degree first (official version. The truth - I was in love). I did finish my degree in literature and languages though, and by the way, my thesis was dedicated to fairy tales, which are my passion since childhood. After that I fell out of love and moved to Kiev from my home city. There I worked as an interpreter, journalist, copywriter, designer, art director, and, lastly, as a creative director of a network ad agency. By that time I was married and had a four year-old son.

Now we’ll make a detour from this exemplary career ascension. As is evident from this bio, I have no academic training in art, which is my life-long grief. I adored drawing when I was a kid, but then school kept me very busy for several years. My next drawing spree was in at the University, because studies were excruciatingly boring. I started to draw at lectures and at home late into the night. I copied artists that I liked, doodled and illustrated a diary.

When I started to work, I continued to draw in the evenings. By that time I knew I needed ‘my fix’ (If I don’t draw for several days in a row I turn into a wicked witch), but did not dare to treat it as anything but a ‘pleasant hobby’. That came to an end after the birth of my first son. Before that I had work and hobby and they lived cozily together in one life. After that I had work, family and hobby, and there just wasn’t enough room for three large spheres in one life. One had to go. Of course it was drawing, because “it’s not serious”.

After four years of not drawing, I felt so utterly wrong about everything I did, despite an impeccably successful front, that I quit at the top of my career into ‘nowhere’. I knew I wanted to draw and had no other way than to make it my work, but couldn’t make up my mind, how to go about this whole new endeavor. I even did not know what I wanted to do, let alone how to approach it - draw books? commercial illustration? art in a studio? And then I had to labor through the “I am not a ‘real’ artist” thing. While I couldn’t make up my mind, life made it up for me and I was pregnant with our second son. With that many crucial changes in life, another twist did not matter. We decided to move to Israel to be closer to grandparents (official version. The truth - it is easier to start something new in a completely new environment).

How is the cultural climate in Israel for artists like you?

I am not sure. I gave birth to our second son a month after the immigration. At that time we thought we were taking a year’s break to figure things out while I am on a “mom’s leave”, and then would return to Kiev. But you know how life is? It sucks you in here and now. In a wink the senior boy went to school, my husband mastered a new career in web and app design and I was pregnant with a third boy! Moving back was out of the question.

My point is I am not leaving house much, except for child playgrounds, parks and seaside. I don’t know local art environment. This weekend I have been to Yaffo to hang a small exhibition of my works in a theater, and that impressed me like a world cruise. You know - nicely dressed people with no kids languidly walking the atmospheric ancient streets, strewn with galleries and coffee shops and all…

A lot of illustrators and artists work digitally today, why do you prefer pen and paper?

I’ve worked digitally for seven years in advertising. That’s not half as enjoyable as hand drawing, and then I guess to me hand drawing is just easier. I do use Photoshop though, I am not as medieval as it may seem.

There is a strong influence of folklore and fairytales in your work; do you have a favorite story?

Oh, oh. Not sure what to answer, because there are so many of them. When my kids ask me to tell a story, they have to answer a dozen questions, before I decide which to tell: funny or scary; witty or mystic; eastern or western; crazy or reasonable; people or beasts; long or short; riddled or plain; gory or peaceful? (I have three boys, so no princesses, yes). So, now I don’t have a favorite story, like a gourmet can’t have one favorite dish, because he is so sophisticated in food, but in childhood I did have favorite tales.

My dad read to me Russian and Grimm fairy tales a lot and I knew them by heart. We had an unabridged edition for researchers, so luckily these tales were not robbed of their initial richness ‘not to scare kids’. I did not scare a bit, but was enthralled by the murky, fickle world, where everything turned into everything else, beasts talked and threw off skins to turn into people; wicked stepmothers ordered their stepchildren killed in the woods to eat their hearts and spit a golden coin every morning ever after; dead water revived heroes; a forest witch lived in a house of chicken legs and had a flipping bed that tossed incautious travelers into the underworld; tree fairy had her arm cut off to spill gems and rubies from the wound in order to help the hero fulfill the wicked king’s desire; death of an immortal skeletal villain was hidden in a needle, needle - in an egg, egg - in a fish, fish - in a duck, duck - in a hare, hare - in an eagle; eagle - in a chest; chest - on a tree at the end of the world; a dragon had nine fire-spitting heads and a magic finger to grow new heads if some got chopped off; treasures turned to autumn leaves; people returned from a one-day visit to the underwater king to discover hundreds of years had passed in the real world; golden-skinned princesses jumped out of oranges; princesses threw off swan’s feathers, frog skins, snake skins, lizard skins; princesses washed ugly sorcery off their faces with black soap; poisoned pins in the hair turned princesses into birds; wrong moves - into stone… There was even an ancient version of ‘Donkey Skin’, where the stepmother was a wicked witch and turned the girl into… a cow’s stomach. She predicted that “the enchantment will be broken only if the King kisses you, ha-ha-ha”! Indeed. The Cow’s Stomach took the job of a shepherd on royal pastures and stalked the king until one day he was crossing the field during a hunt. Then the Stomach entangled the king in his… eh guts and threatened to strangle him if he doesn’t kiss ‘her’. Well, if there’s a happy end to this story, then you know, nothing in life can ever upset you really much…

I remember very well, that when as a child, this didn’t seem strange or weird or cruel or unreal. They were just part of a gripping story. I first started to appreciate just how weird that is, when Dad read these same tales to my junior sister (we shared a room). She was 6 and I was 15 and I listened to them once again from a whole new perspective. Her favorite tale was about a princess that got abducted by this ugly immortal villain and her fiancé pursued to rescue her. He gets killed three times, chopped into small pieces. But his brothers revived him with ‘dead’ and ‘live’ water, when they saw that the silver spoons he’d left them blackened and that meant he was in trouble. There was a part where he has to scramble out of a bottomless abyss, and a huge magic bird condescends to carry him on her back. But she warns him to prepare enormous food and water supplies. These end long before the end of the journey out of the gargantuan abyss, but the bird demands more, or else she will fall exhausted back into the abyss. She advises the lad to cut his wrist and give her some blood to drink, and then to cut some meat off his legs and give her that to eat. Well, he does so several times and by the time they are safe and sound on the surface, he is dead. But of course his brothers know this, because of the black spoons and are waiting there with dead and live water. The bird throws up his flesh. Brothers put the pieces back, spill some dead water on them and they grow back into place. Then they spill some live water on the lad and he comes back to life.

Now, I am lying there in the dark, while Dad reads this to my sister, shocked and wondering just how weird and disgusting is that, when my sister stops father and says: “read that all over again, starting from the bottom of the abyss”. And that’s the difference between kid and adult perception of fairy tales. Kids don’t attach any characteristics - nothing is ‘terrible’ or ‘wonderful’ to them - it’s all just a part of a fascinating plot. They do not divide things into pleasing and disgusting, real and improbable; they just take everything for granted. Yes, the mushroom turned into a little man. Yes, the cow stomach turned into a beautiful girl. Quite natural.

I like to illustrate this point with another story. I remember my three-year-old son finding a dead bird in the bushes once in December. He insisted that we go and see its metamorphoses every day. I felt rather ill at ease at certain ugly stages of decay, but he was interested, because he did not KNOW it was ‘disgusting’… To him bird-turning-to-a-skeleton or frog-turning-to-a-prince is the same type of natural metamorphosis that makes the world tick and such an interesting place to observe. There’s no good or bad, there’s just infinite variety and wonder. I am glad I’ve smuggled a tiny measure of that perception into adulthood and I think that is mostly what my drawings are about. 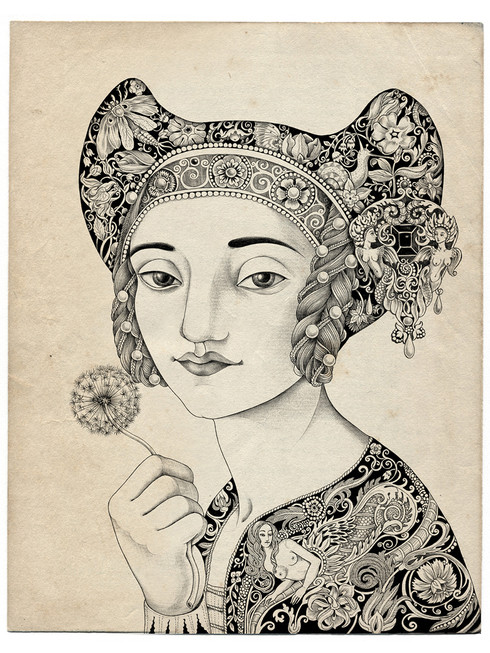 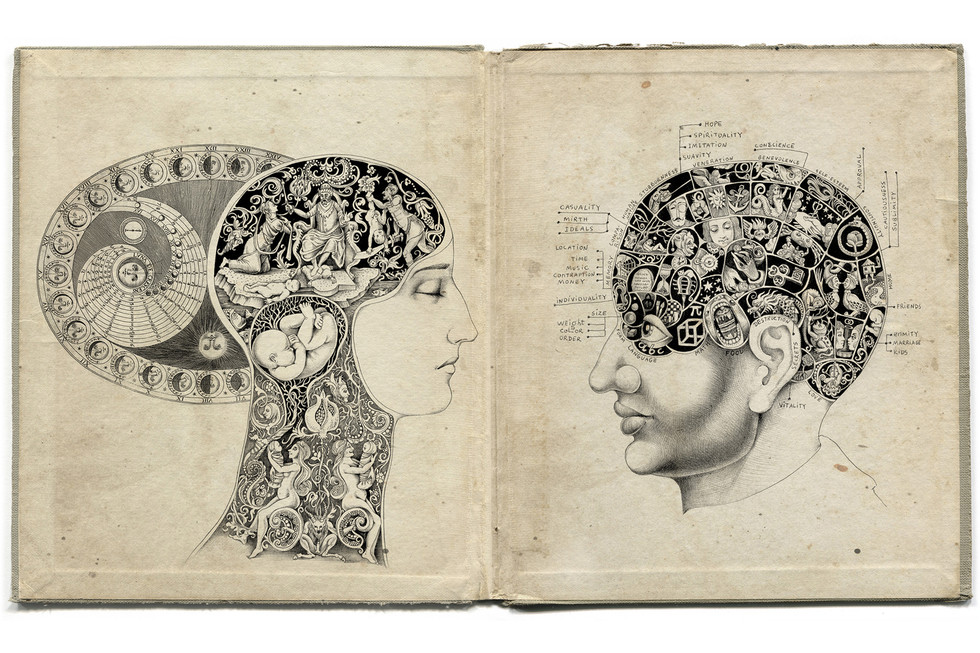 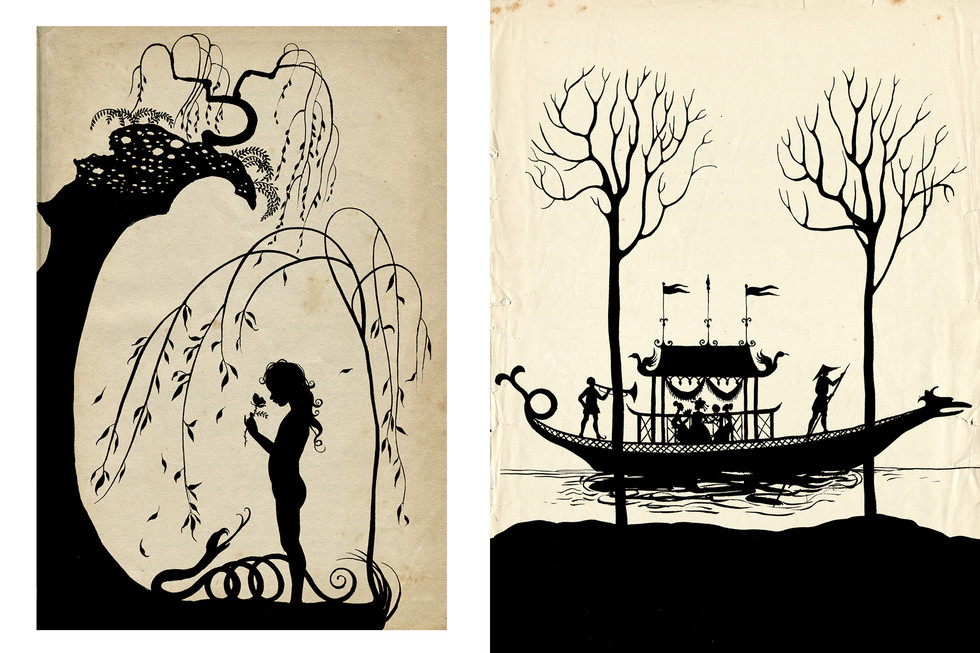 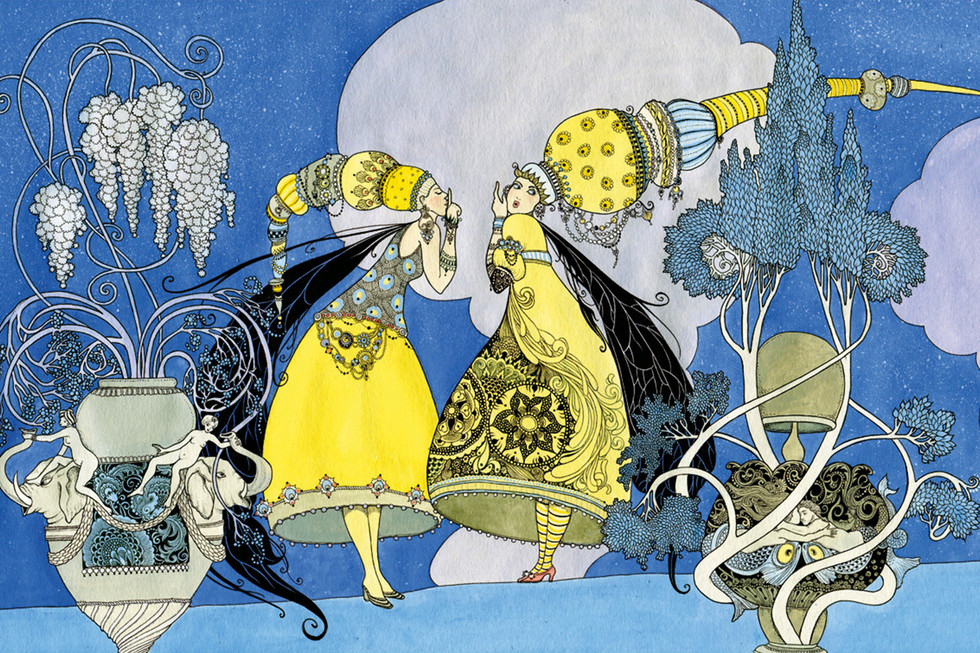 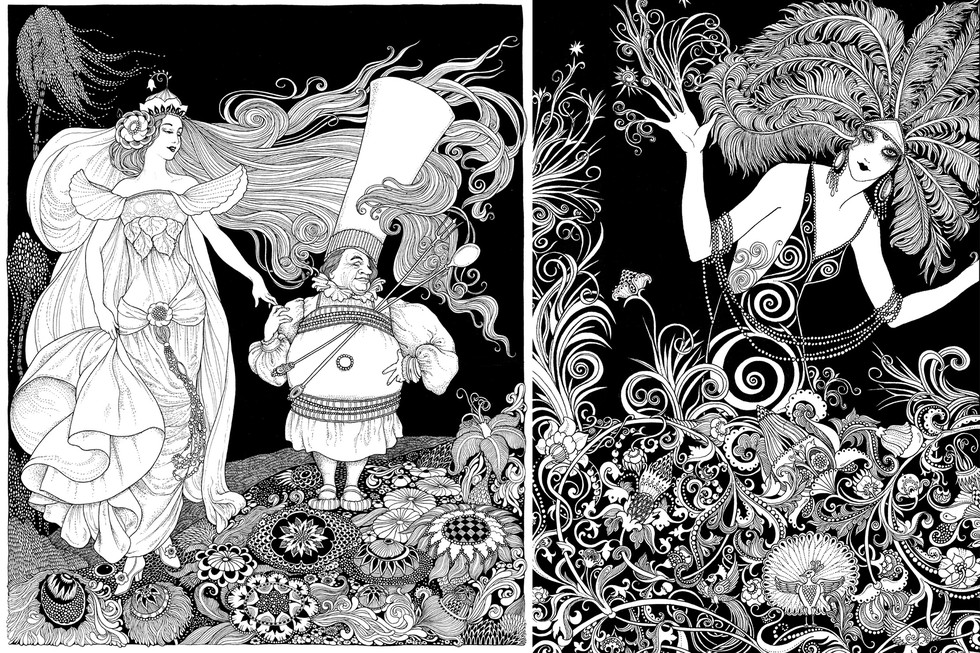 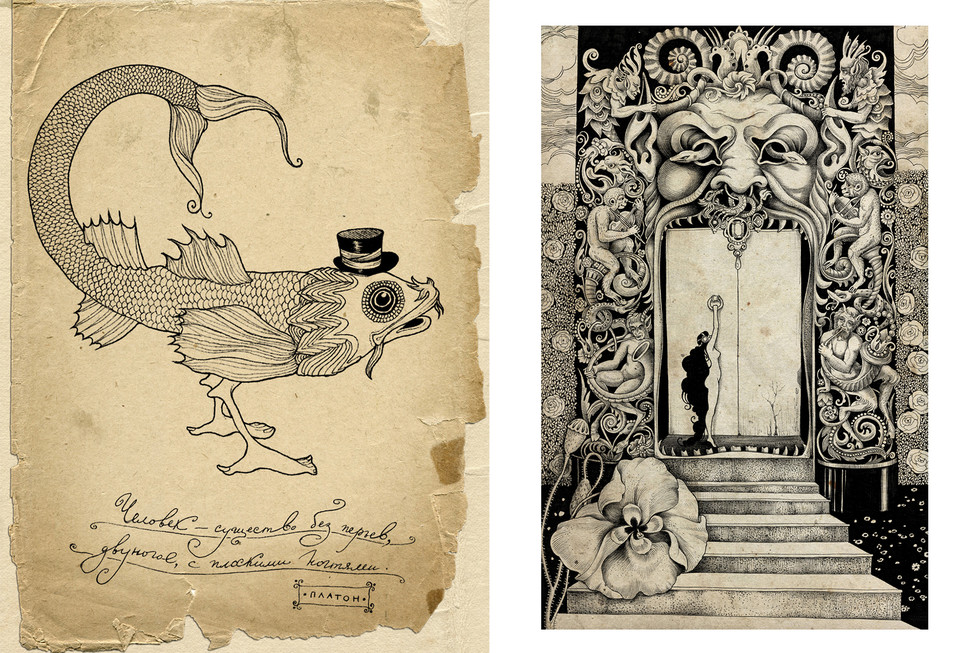