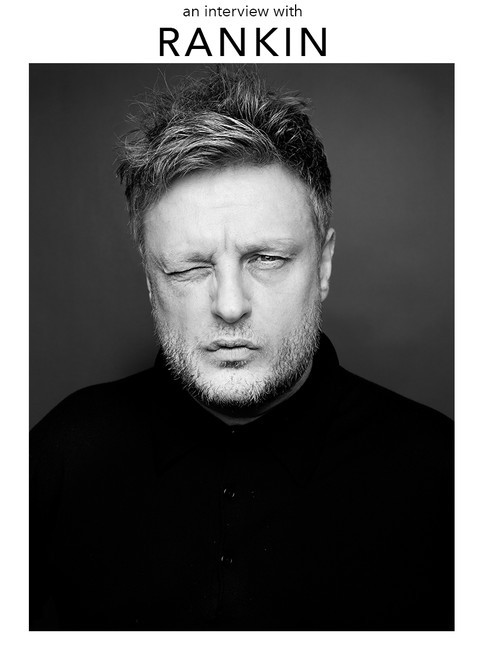 More Rankin for the masses

How many times have you seen those cheesy American television programmes where the “call to service” comes? You know the drill: when the call to serve comes, one answers… yada yada.

Muffled voice: “Would you like to interview Rankin about his new book, MORE?”

Moi: “Whatever, let me know. Like, no big deal. If it happens, it happens,” I say, trying to sound like a chillier version of myself.

I hang up the phone, and gone is the über-fierce telephone version of myself. (Adios, chica.)

SOME BAD MUSIC AND A SING-ALONG
At times like this, only one person can bring me down from the ledge. I find my playlist and scroll to MC Hammer’s “U can’t touch this”. When my favourite bit starts, I torture everyone in the office by singing at the top my lungs:
“Break it down:
Stop, its Rankin time” (Yes, I changed the “Hammer time” bit to “Rankin time” to fit my circumstance.)

Although you are all forgiven for thinking that I’ve lost the plot after the cringingly embarrassing MC Hammer sing-along, the release of Rankin’s MORE is not just a big deal for me. (Although I’m pretty chuffed about the interview, it’s not all about me, me, me…)

RANKIN’S BIG KAHUNA
Rankin’s MORE is a big deal for anyone interested in photography. His visual aesthetic has defined a generation to such a degree that there is a special place in popular culture reserved just for his good self. Not to mention that Rankin and his posse: Jefferson, Katie, and Katy started Dazed & Confused, one of the new wave of 90’s British style magazines that brilliantly documented every thing happening right then, with freshness, cheekiness and a fuck-you finger (probably painted a neon colour) proudly raised in the air.

MORE offers an overview of some of Rankin’s most phenomenal work and it documents his photography from the fashion, music and media worlds over the past 20 years.

For Rankin, who has a mammoth picture archive, and has taken so many unusual photos of celebrities, I wonder if it was a nightmare to decide which pictures would actually make the cut, since the hardcover book is a whopping 368 pages, and contains 243 color and 110 duotone photographs?

“Well, the book was always gonna be full on. This is my third retrospective, it’s basically the big Kahuna, a greatest hits of sorts,” he says.

“I have a very emotional relationship to my work. But there are some pictures that floated around that we ultimately decided not to use. They are a little bit like your family, because they’ve been seen so much: a bit like the annoying cousin… so you put those photos in a box to simmer for a while, and you hope time will change the way you feel about them,” he explains.

ON DUMB ASSES AND PAPARAZZI
When I ask him if anyone refused to be included in MORE, my question triggers the type of response that I’d been warned about from people who know Rankin well.

An inch away from turning into an angry yob he says: “Funny you should mention it, but there was one celebrity that was such a dumbass he said he didn’t want his picture in the book because he doesn’t look like that any more. I mean come on, it’s a retrospective you dumb ass, that’s the meaning of the name!” (Believe me I tried, but he wouldn’t give up the name of the dumb ass.)

Rankin then admits that it was actually the celebrity’s publicist that broke the news to him. (He wouldn’t give up the name of the dumb ass publicist either).

“I’m happy just the same, actually if he’s too fucking stupid to get it, I shouldn’t be so annoyed. But, I really wanted to say “don’t be so fucking dumb”.

Rankin tells me that he thinks its “ kind of silly” that there are some celebrities that don’t want him to take their picture, although the paparazzi take their picture regularly, and “they look bloody awful.” “At least in my photos I think they look pretty good,” he says.

ON BEING AN ORIGINAL GANGSTER
For Rankin, the work to bring MORE to life involved a re-examination of his own contribution to photography. “Back when I was starting out, I was doing stuff as an original gangster, like you say… I was an O.G., and part of a group of unique photographers. Our work was, for the time, very conceptual and the edge was about being super competitive. We kept trying to better ourselves constantly, in order to come up with the best ideas. That was special. I’m proud of what I did then. It was the fire of the glory days,” he explains.

“It feels quite weird to see this never-ending celebrity filled party diary of your life and you’re not in any of the photos. But MORE isn’t my swan song. I called the book MORE, to really signal that I’m a photographer and that after more than 25 years of working, I’m not ready to quit,” Rankin explains.

CODE NAME MORE: a.k.a SOME, GUSHY ROMANTIC STUFF
We get onto the subject of love, and Rankin explains that MORE is dedicated to Tuuli, his wife. “In our secret language saying “I love you” to each other is to say “more”. (Note to self: must find code word, must share with some special.)

I ask him if he has any photos that he loves more than the others.

“Some of my all-time favourite photographs are pictures I took when I first met Tuuli. I really like them as images. We met when we worked together on a campaign for Elle Macpherson. I met her, we fell in love and we got married, so there are all those intense personal feelings attached to those photos,” Rankin says.

Aside from the pictures of Tuuli, Rankin says that another favourite photo that he has taken is from “Eyescape”, a series of photos of eyes: “one of those eye photos is up on my wall. I think it’s the original test one. I haven’t tired of it yet. In fact, I think I actually like it more as time passes. There’s also a photo of a girl in flames that I did that I like a lot,” he says.

THE RANKIN STYLEWhen I ask Rankin if he has a particular aesthetic or style he gets testy again.
“I try to shy away from having a style. I know that there’s not just one way of lighting for instance. I’m always looking for something different. That’s part of a thread of my love for life that runs through everything I do,” Rankin explains.

“When I was 28-29 years old, I was the guy who wanted to be successful. I wasn’t angry, but a bit aggressive. Just the other day Miley Cyrus asked me if I would work with her and do some photos that brought back my “in your face confrontational attitude”. I guess if you had to, you could say that style was unique to me during the 90’s”, he says.

DAZED & CONFUSED AND HUNGER
“Nowadays it’s all about celebrity,” says Rankin. I can almost see him shaking his head through the telephone.

“Is that what happened to Dazed & Confused?” I ask. “That’s a very good question,” he answers. Rankin’s voice has dropped an octave. I ask him if he’s still a part of the magazine, his name is still on the masthead after all.

“I’m still an owner of Dazed & Confused, but I don’t get involved with the editorial side as much anymore. Of course there’s been times over the years where I’ve had my head in my hands, as is the case with anyone that works in publishing, but I completely love the magazine, and always will. It’s been a huge part of my life and career. Whenever I meet up with any of the others [from the team], we tend to wind up talking about the history of the magazine,” he says.
“Dazed is a magazine for young people though, and it should be run by young people and fuelled by their ideas. That’s one of the reasons that I take a backseat. Jefferson [Hack] and I have become more involved in it again recently and are planning a bit of a reinvention. As magazines change and become more digital, we need to play to our strengths. We’ve always championed the new and Dazed is still as cutting edge as it was when we founded it in the early 90s. There’s a very exciting future ahead of the magazine.”

I wonder if Hunger is the grown-up version of Dazed & Confused? “Part of the reason I decided to start Hunger magazine, and Hunger TV was a strategic decision. I knew video was the future and I was keen to find a way to meld fashion and film into a new genre. I’ve always been a director, working on shorts and features. I just really believe in doing things like this online. Hopefully it will influence the genre,” says Rankin.

He tells me that he is proud that his “feet are in both centuries, and part of two camps, pre- and post- Internet”. He does admit however to being glad that he didn’t have access to the Internet when he was starting out.

“I learnt on film. I was part of a group of people that looked in books and tried to do the same things in our images that we saw in books. That’s all changed now.”

AND FINALLY, A TINY SING-ALONG
My final question to Rankin is what he listens to in the studio whilst working. The line goes silent and I’m afraid he’s tired of me once and for all.

“Oh god, its so embarrassing,” he says stalling. (I conjure up my telemarketing know-how from crap jobs of yore…I’m dead quiet, and I wait.)
“Well, I usually listen to Elton John’s “Tiny Dancer”, particularly at the end of a shoot.
© MORE by Rankin, to be published by teNeues in October 2013, € 98, www.teneues.com 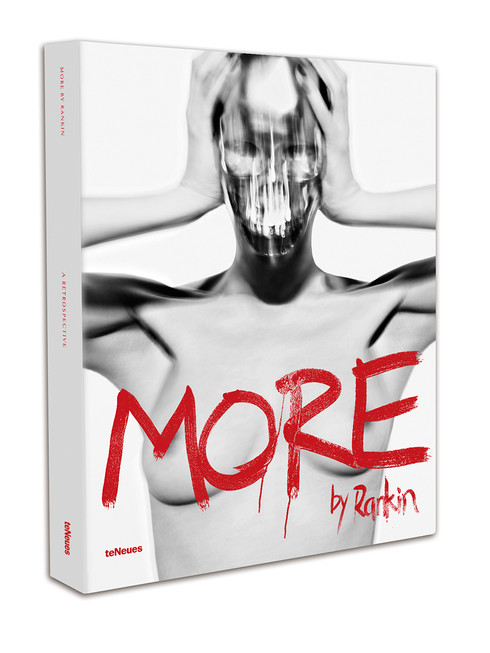 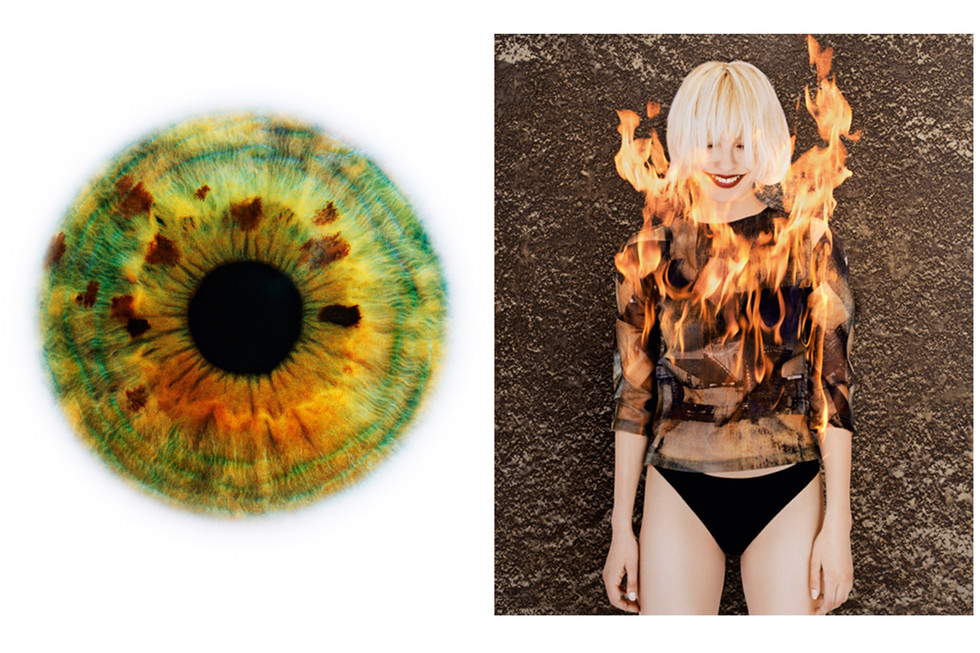 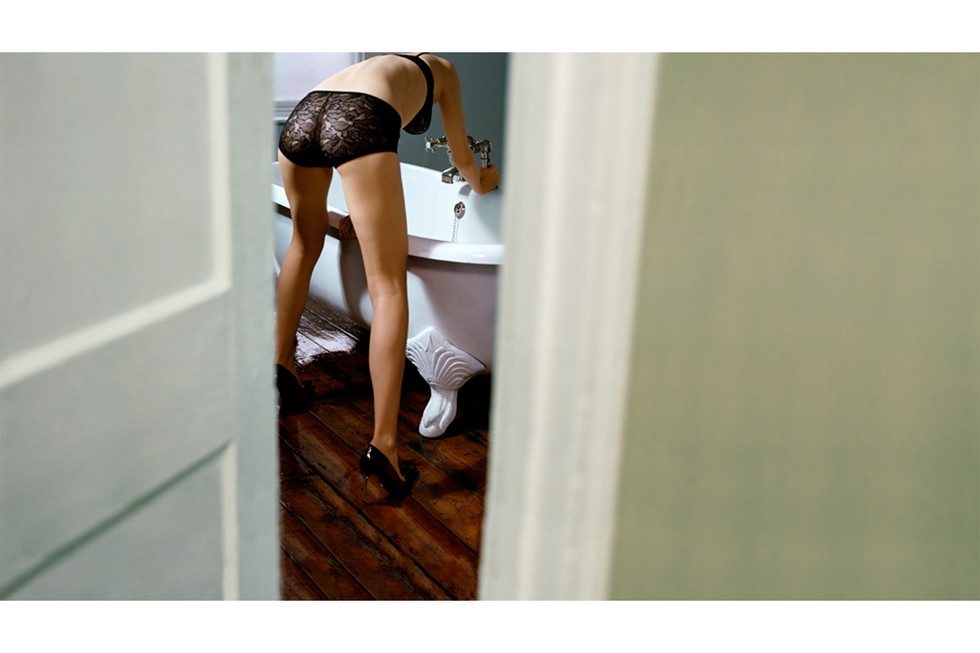 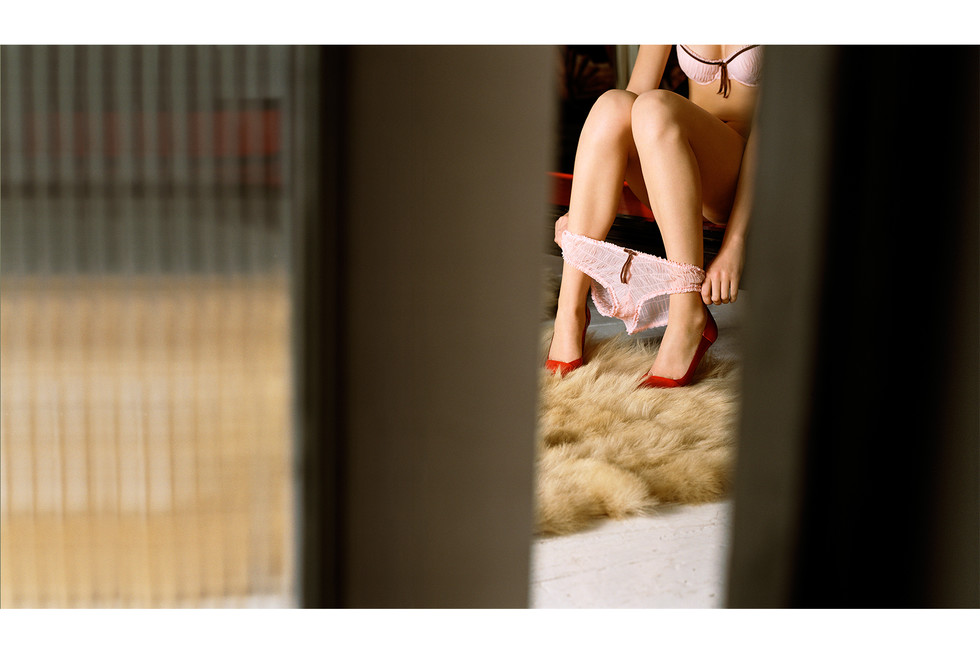 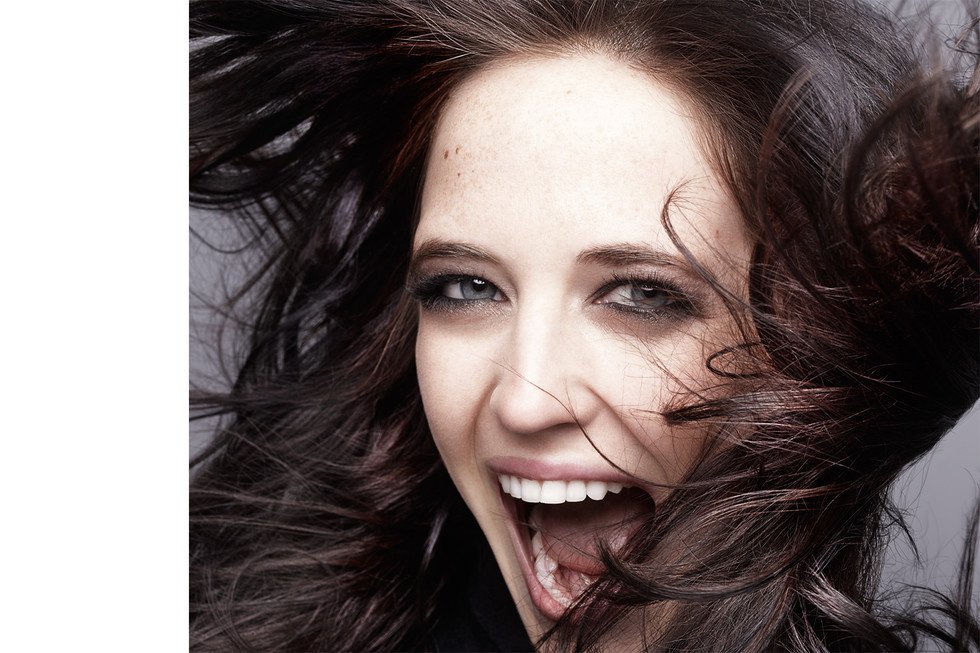 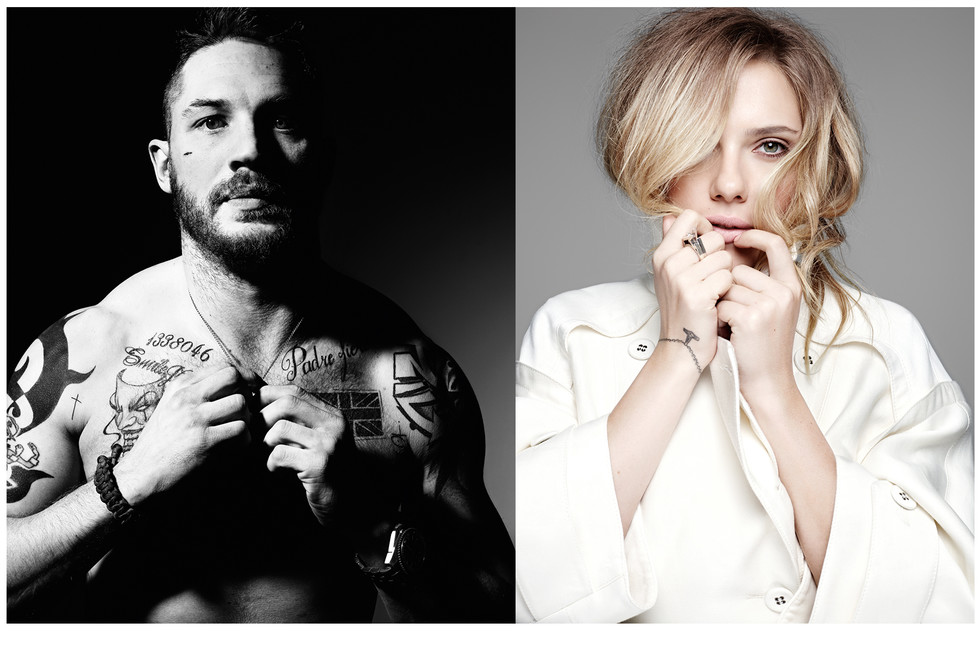