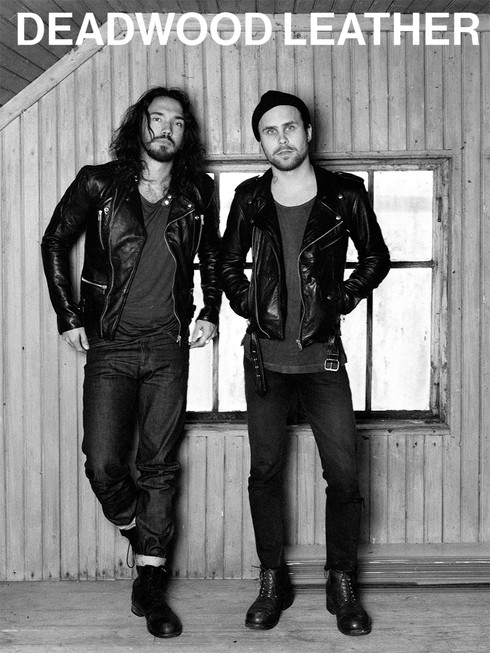 Deadwood started two years ago and ever since the main focus has been on creating leather jackets made of recycled materials. It's a windy morning when I'm meeting up Felix von Bahder and Carl Ollson, the guys behind the brand, at their office at St:Eriksgatan. We talked about following your heart and how to create clothing that never goes out of style.

FE: Tell me about how you two met each other?

FvB: We met back in 2007 at SOLO (a Swedish clothing store, editor's note) where I had worked for a couple of months. I later met Calle who had started working in the same shop. I was working some extra hours alongside my studies and Calle worked there full time. During those hours we spent side by side, mostly at the jeans section, we felt a good vibe between us and we started to hang out even outside of work.

After a year at the shop we started to think about creating something ever better than the clothes we were working with every day and do something by ourselves. First we thought about opening our own store, because when you're working under someone else's rules, you just want to prove that you can do it even better. And then all of a sudden we ran into this empty place at Söder (the southern parts of Stockholm, editor's note) and we opened a second hand store without knowing anything about what we were doing except that we both knew what we liked. So without any budget or knowledge we put our hearts in this project.

FE: Why a second hand store?

FvB: I guess we were fans of vintage even before we opened and had a lot of vintage clothes already in our wardrobes so we tried to get rid of all of that and then we also got a reason to shop even more, but not only for ourselves. We continued for almost two and a half years and we had a lot of fun even though we failed sometimes. At that time we started to build some kind of fan base with friends and people around us who came by our store and just hung out over a cup of coffee or a beer and bought our clothes. We also started to work with remakes and patchworks like these classic punk remakes and then we contacted people who knew how to work with recycled leather and that’s how it all began.

FE: Was leather something you wanted to work with from the start?

CO: The most difficult part for us was to find good looking vintage leather jackets to sell in the store. The material was often in good condition but most of the time the model and fit was just

lame. The shoulders were broad and sharp and the jacket short. So we thought about the idea of producing new leather jackets, with a slightly more up to date feeling; of old patent leather that still was in useable shape. We started to sell these patch worked jackets in our store without any label on them and people liked them.

FE: Were you both interested in fashion before you started at SOLO?

FvB: For me the jeans and denim part was the most interesting thing about working there. There are a lot of techniques and history to learn about jeans so I just dived in to all of that and really enjoyed it.

CO: I would say the same, at that time when we both worked there, the shop was selling a lot of jeans with high quality like vintage Levi's and that was really exciting.

FvB: There was a good vibe at SOLO back then. We could play the music that we liked and sell good looking clothes.

FE: And that's when you realized that you wanted to take this interest to the next level?

FvB: Yeah, it was the creative part during that time, the rock'n'roll spirit, and the band who came by the store and played music who made us think about taking it to the next level with our own names. It's something special about having a place of your own, no matter if it's you own apartment or a café you have the possibility to create your personal little world.

FE: How important is the recycling process for both of you? Is the thought about the environment and the global warming something that's on top of your list?

FvB: Yes, that's one of the main reasons we opened up a vintage store. It's a combination between the environmental aspects and the feeling of finding something unique. By that time I was studying a course at the University about sustainable development and that made me even more interested in taking care of all the resources that already existed. Because when you start to think about these things it's hard to ignore them and when you know how the industry works you can't just delete that insight. Even though it's hard to produce anything at all without leaving any traces on our earth we're trying to do the best we can in our way. We want to make people think in a different way and inspire to small changes.

FE: Your idea is to use leftover pieces from the leather industry to produce your jackets? Felix is walking across the room and showing me a black jacket.

FvB: As you can see this has a patchwork structure, its smaller parts of different leather from old garments. So it's definitely a creative process to find all these pieces and make them fit together so the jacket will feel symmetric and coherent. Right now we're looking for old lambskin that gives the jacket a perfect weight but also a light and airy feeling. It's been a long process of finding someone who gets the idea of what we’re doing and how we want to work. Finally we found this amazing team in Bangkok that works with agents all across Southeast Asian that “scouting” these old leather pieces for us. Once the leather arrives to our workshop and to our team they examines what’s usable or not. Because of the distance, it's impossible for us to be there as often as we might want to but it's comforting that we found these people who understand our aesthetics.

FE: When you first started did you feel that there was request for recycled leather products? It feels like there's a lot of enlightened people who thinks about the ethical aspects of buying second hand leather today?

CO: Not really, but I guess this increasing awareness has affected people and their consumer habits. But in the beginning it was just us who had the desire to create these jackets so no… Before that we didn't feel any request at all.

FvB: We're not the first in the world who works with recycled leather but I think we might be the first to work in this scale and with this ambition. People have this thought about the leather jacket as the most expensive garment in the wardrobe but we don't think that’s necessary. We want to make pieces that will last for many years for an affordable price. The best thing is when we actually see our design walking down the streets instead of just hanging in some fancy stores.

FE: When I'm looking through your web shop I get a specific picture in my head about the typical Deadwood customer. It somehow feels like Deadwood leather is about a lifestyle?

CO: We've grown together with Deadwood, from the start we had this clear idea about our customers but meanwhile as the collections grew bigger, we noticed that our idea was wrong. I think we had this flattering picture of ourselves as a bit more alternative and cooler then we actually were. We see a mix of ages, nationalities and subcultures that are buying Deadwood and we realized that we're more commercial than we thought. I never thought that our design would appeal to so many people, but when you think about it, it's really awesome.

FvB: I think there are certain kinds of people who are drawn to our brand and they are people who like the same things as we do. Our passion for music and especially for soul and punk has influenced our aesthetic values and there’re a lot of musicians who really like our stuff. It's

always fun to see your design come alive on television or at a stage. There's this universal image of the leather jacket as something sexy and as this classic rock n' roll piece which should be found in every artists wardrobe and yeah… we're making fucking good leather jackets. But it's not all about the jackets. We're making jackets, jeans, t­shirts, and jewelry as well. Once you started you can't stop. Your soul is screaming for new ideas all the time.

FE: I get this feeling of an androgynous look in your clothes and somehow it feels like the thought about unisex clothes, which can be used by anyone, is linked to the thought about the recycling process and the classic leather jacket that never goes out of time?

FvB: The most we design are unisex and can both be worn by women and men and yeah… that might seem like an androgynous look. But of course it's hard to ignore the expectations from the fashion industry that you should have this division between men and women. We might have to do a pair of jeans with a model for women just because the market need it. It's always a struggle between the industry and your own heart.

FE: You work with the concept of collection for each season?

CO: When we started we didn't like the idea of working with collection but… as the time went by we realized that it's necessary if we want to expand. When you travel around the world and visit fairs in Copenhagen or Berlin you need to have a collection. So I think it became important for us to present two collections each year, otherwise we might just have stand still. But even though we work with the concept of collections it doesn't mean that we want to create new trends. We’re pretty classic in our design so we're looking for inspiration in the past instead of standing on the front line and try to create some innovative design for the high fashion customers.

FvB: Yeah, like Carl is saying, we want to keep our clothes away from that desperate search for new trends and just stick to the thought about garments that will be usable for a long time.

FE: Whats next up for DEADWOOD?

CO: We've just produced our first beer. FvB: Yeah, we like beer. This Sunday we will have a releasefor this beer that we created in a collaboration with a brewery at Södermalm. Besides that we're in the middle of the process of finishing the last things for fall 2015 and hopefully be able to present the collection for our agents in January, and of

course get as many orders as possible. There will be a lot of focus on t­shirts and shirts made of 100 % recycled cotton and that’s very exciting.

FvB: The future feels bright! Next autumn Deadwood definitely going to strike hard and people will know who we are. 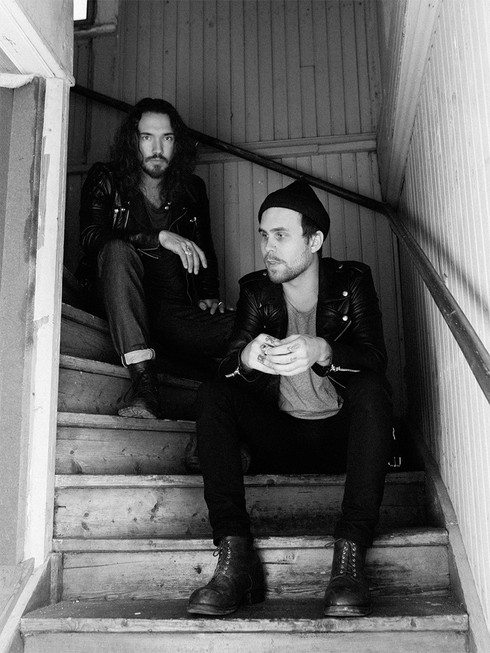 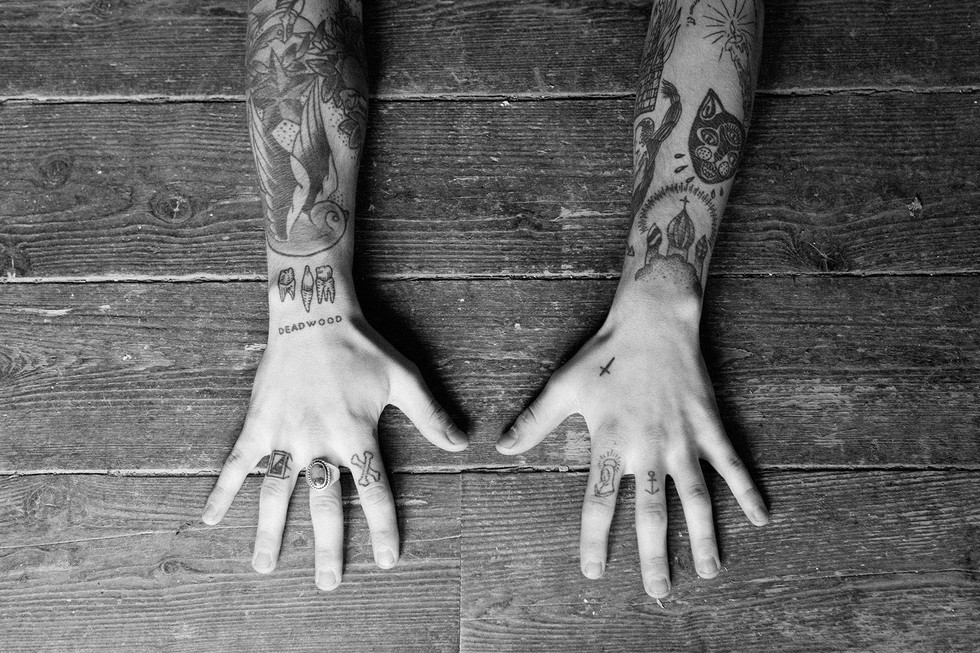 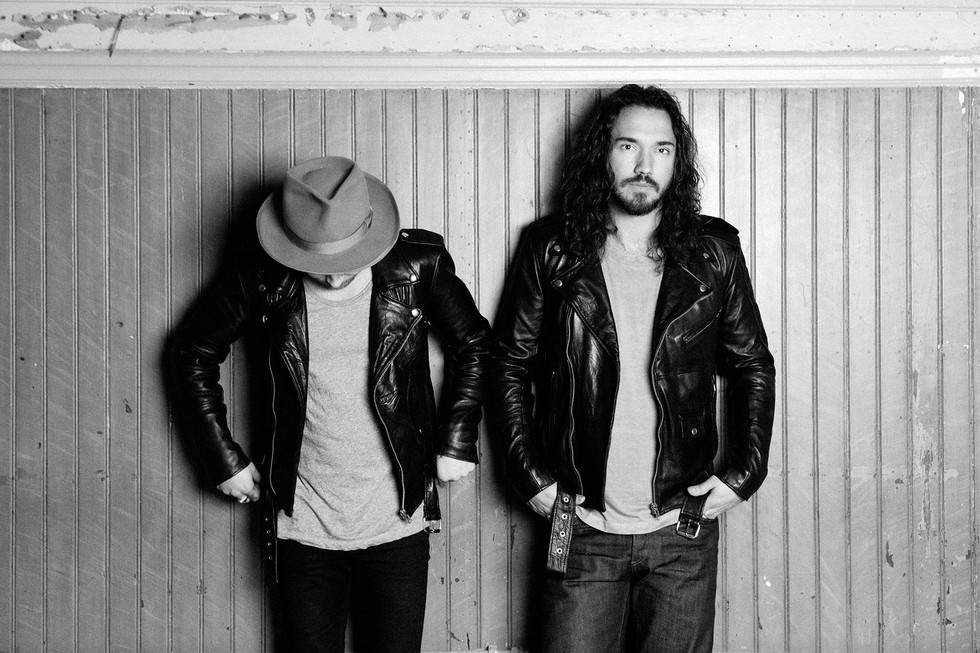 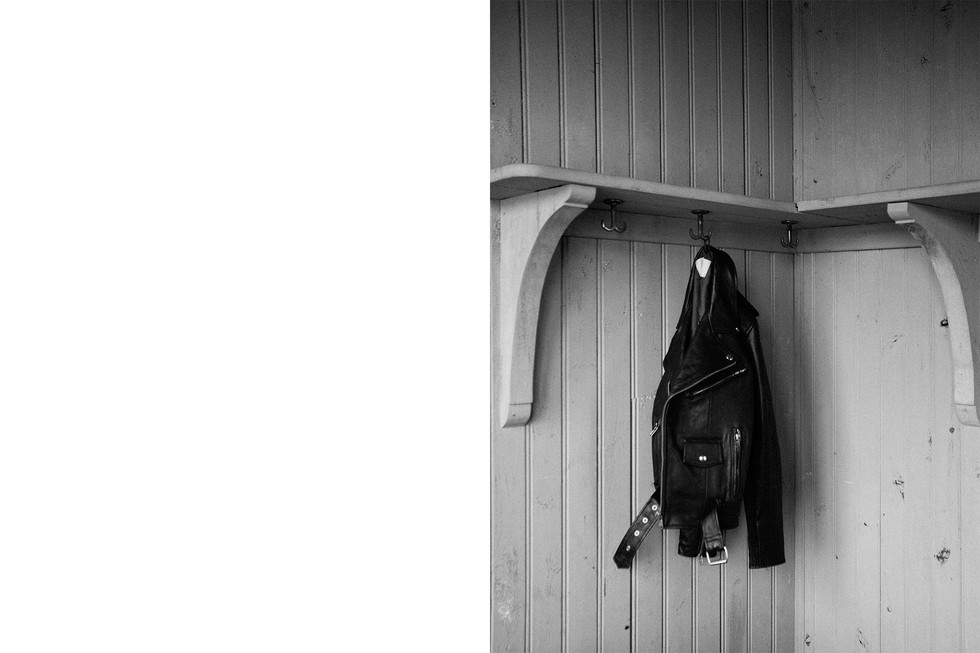