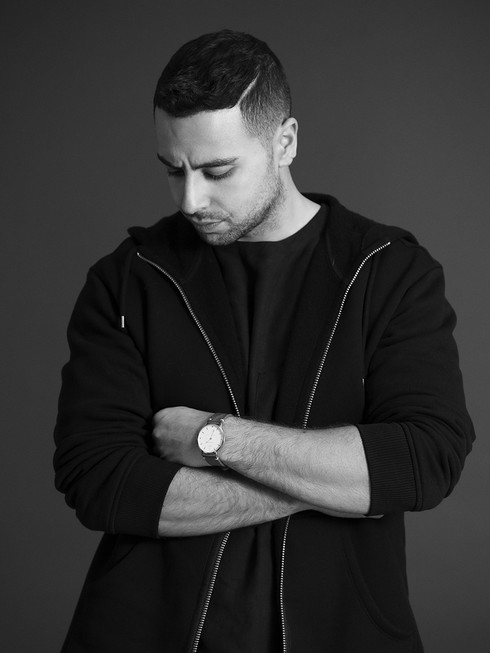 XOV – who used to kick it with Lucifer

Do you know anyone who spends his or her time between LA and the Swedish archipelago? No? Didn't think so. There's quite the contrast between the sleepy and empty islands outside of Stockholm and the dreamy Hollywood hills in the USA. Two years ago Damian Ardestani isolated himself in a cabin, started writing, playing the piano and created what will be his first EP.

We meet at the Odalisque Magazine studio space, grab some coffee and take our seats in the kitchen area. I had just finished reading an interview with Damian in the largest daily newspaper in Sweden and I've been listening like crazy to his songs Lucifer and Boy's don't cry. This guy's got a fantastic sore voice and writes melancholic and miserable lyrics.

MM: First I thought you might tell me some about your EP that's being released on the 14th this month; what are people going to hear? I've already heard it all, but for those who haven't, what are they in for?

DA: You will be listening to the last five years of my life. The EP's a journey starting out in a darkness that evolves into anger and sorrow but finally in the end becomes something positive and at parts even joyful. All of the songs contains different parts of my life, none of them are alike or about the same thing in any way.

MM: Did you also produce it all by yourself?

DA: I produce everything with a friend of mine, Jonas; he's also called Kono. I would love for him to finally get some credit, it's really a great collaboration. Kono has been essential for the entire project and he pushes me in becoming a better producer and artist. I can get hung up on one tiny detail for days but he's got a good overlooking eye and I think that's what made us able to make this music. We have got a good balance. Also he's got a background in pop music and I've got my roots in hip hop.

MM: I notice that, I wasn't sure if I was listening to pop music or R'n'b when I was going through your songs.

DA: I know, I've got the music on a fine line. Is it commercial, is it indie, is it pop or even hip hop? I don't know but it's a result of our collaboration coming from different musical backgrounds. I think it keeps the music dynamic and original.

MM: How did you meet Kono?

DA: We met at an event seven years ago. At that point I hadn't started pursuing a career in music, so no one really knew I was a musician back then. When I'd decided to make myself a name in the industry I contacted the only guy I knew working in the business and that was him.

MM: Growing up were you always into music or did that interest evolve later in your life?

DA: For as long as I can remember I've had an interest in music. As soon as I learned how to write I started making poetry. When I was only nine years old I got my first poem published in a children’s poetry book and already then my writing was dark and metaphorical. For me writing is a way to ventilate; it's like therapy. If I don't write I get consumed by my feelings. I later learned how to play the piano which turned into singing and at the age of eleven, when singing wasn't considered cool enough, I started rapping. Music's always been a natural part of my life.

When you've been working on something for two years and then finally it gets ready for the public, it must be some kind of experience, good or bad. Damian tells me the feeling's painful but of course also liberating in a way. When we have our talk it's exactly one week before the EP's being published. There's no room for changes. Damian's a perfectionist and being both artist, songwriter and producer gives him a control that's hard to let go of. He says he's probably a pain in the ass to work with, since the work never ends when you're looking for what's just perfect. But sometimes being done is better than being perfect.

MM: How come you only write in English and not Swedish?

DA: I grew up listening to American hip hop and most of my family lives in the states, so it comes naturally. I've always spent a lot of time there, holidays and school breaks, I never really felt I was Swedish until about two years ago. I felt as I was a citizen of the world.

MM: But you grew up in Sweden right?

DA: I always lived in Sweden but since I travelled a lot I never really thought of myself as a Swede. Until now.

Damian splits his time between LA and Sweden, spending three months at a time in each place, I'm not convinced he chose the right months for being up in the north since it's raining / snowing outside and I'm pretty sure the weather situation's much better in California at the moment. It seems like a struggle living on an island with only boat connections in the middle of winter.

MM: What happened two years ago when you moved to the archipelago?

My company and therefor my economy crashed, my relationship crashed and I found myself completely in chaos. It's easy for people to judge you and I felt I had to get away from being victimized. Everyone thought I was screwed, they thought my music career was over. No one thought I was going to make it. I felt I had to cut the chords with all the negative people in my life, so I just left.

Growing up in Tensta, a close suburb to Stockholm it wasn't really as if Damian was used to being outdoors and all alone surrounded by nothing but the forest. But with some inspiration from the movie Into the Wild he saw his chance for change. For the first six months he only went into the city twice, the only one who visited was his mother and once in a while a close friend came by. Nowadays he actually has more journalists visiting than friends.

MM: Will you move in to the city now?

DA: No, I will always keep the cabin. It keeps me grounded.