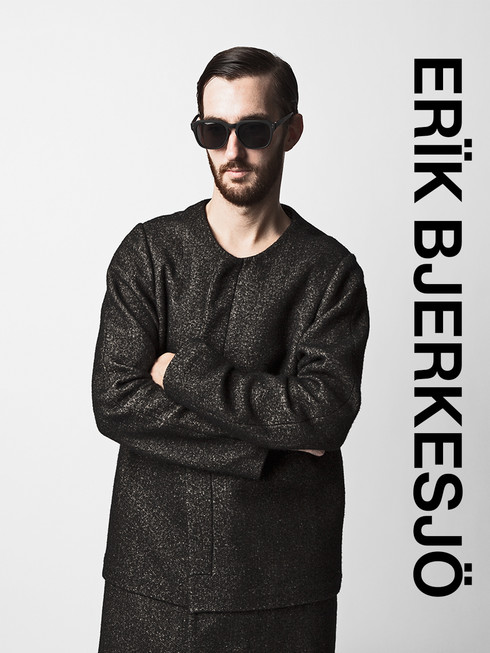 I’ve been trying to get this interview happening for almost two months. Erik Bjerkesjö is not the easiest man to get a hold of. You never know if he’s in Copenhagen, Berlin, Florence or somewhere in the States. When I do finally meet him for the interview, he tells me he’s sick and got a fever, but he still shows up. We’re sitting in the coffee shop il Caffé in the middle of Södermalm, on the southern side of Stockholm. I’m having a foamy cappuccino and the sick man across the table gets a warm cup of Earl Grey.

Erik’s mother, who is also in the textile industry, challenged him to apply for several art and design schools abroad. He got in, got a job at Dior and is now putting all of his time and efforts into his own brand Erïk Bjerkesjö. The style is tailored and clean, but keeps a clear street-style reference. In terms of music, Erik is mixing hip hop with Bach and Beethoven.

MM: Why did you become a designer?

MM: Your mom introduced you to some schools right? And you guys also work together nowadays?

EB: Exactly, she studied at Central Saint Martins in London and is now working as a pattern maker. She’s got a lot to say. I often ask her for advice; it’s great to get a more feminine view on things.

MM: When you began your studies in Florence, was it decided from the beginning that it was shoes you were going to make?

EB: I was always pretty sure about that. I’ve been skateboarding for 20 years now and I think that was a great influence in the choice about shoes. I’ve always had a love for sneakers. During school I started working with my roomie, who has now got his own surf and skate brand. It was interesting to see how those types of brands work. I was studying tailoring, which is totally different. I wanted to mix the two very different styles.

EB: Yes, I think that’s what I know best. It just sort of happened.

MM: You graduated in 2009, what happened after that?

EM: During my last years in at Polimoda I did some extra assignments for the principal, Linda Loppa. She came to Polimoda from Antwerp and used to be a mentor for Raf Simons. We became good friends and she taught me that being a designer doesn’t only have to do with clothes. She made the concept designer into something free and much bigger than just making garments. She is now my mentor, and we keep in contact all of the time. During my second year in Florence I started working for Dior. Linda was the one who introduced me.

MM: What did you do at Dior?

EB: A lot of embroideries! Making small flowers and braids.

MM: Did you know this from before?

EB: No, not at all. I learned everything in the spur of the moment. It was a lot of fun. This was in 2006-2007 which was a really good year for Christian Dior. After my time there I started putting more and more of my focus on shoes. Already at Dior I learned the importance of working with your hands, to craft and really put a lot of work into what you do. I learned a lot by reading the book Handmade Shoes for Men by Lazlo Vass, one of the great shoe kings.

Erik made his first shoe collection all by himself which impressed Linda and because of that she later introduced him to the craftsmen at Azzedine Alaïa and Tom Ford, who was working in a small atelier in the Italian mountains. Erik tells me that the people working there are the best in world when it comes to shoes.

MM: What’s the name of the atelier?

EB: I can’t tell you, it’s a secret. It’s a well-hidden spot and I’m not allowed to say either the name or the location. Thanks to my contact with them I could later start producing handmade shoes with the best quality. After that I then moved back to Sweden for a while, then Copenhagen, Paris and back to Italy. I got a really good start by winning a prize when I graduated, and the orders for my shoes came right quickly. It was a dream start.

MM: How much was a pair of shoes then?

MM: And who buys the shoes?

EB: A lot of people! Maybe not as many in Sweden, since the weather’s so bad…

For Erik’s first runway he’d won a prize of 100.000 €,. The money could only be spent on producing the show, one night only. Of course Linda was helping and pushing Erik to expand and start designing clothes too. He tells me that he’s a major Alexander McQueen fan and that he’d love to present those kinds of runway shows and that the prize money that he’d won gave him the opportunity to do something creatively free just like McQueen.

MM: So what did you do for your debut show?

EB: I wanted the showing to feel like an Ingmar Bergman movie so we used a black light, which made the entire show be seen in black and white. We also had a projection of white noise on the ceiling. The show got a lot of attention. Etienne Rousseau was the show director, and he basically did it for free just because he really believed in me and the collection. He usually does all of the Chanel and Marc Jacobs shows. He’s a Creative Show Director, so it was also a bit different for me, not working with a stylist but with an Art Director instead. After that I had two shows in Milan with Vogue and later on I showed at Mercedes-Benz Fashion Week in Stockholm.

MM: How did it feel, having that major show at Pitti and then coming to the quite small fashion week in Stockholm?

EB: I wanted Etienne to do that show too, we had some epic plans; everything we thought of became really expensive. But it all turned out really great, I worked with the Stockholm based team of Marcus Söder instead. Ultimately it become a great start for my return to Sweden. Just a few days later I started working with the tailoring production at Acne Studios.

After working at Acne Studios (that he speaks very keenly about) Erik is now back in Stockholm and on the search for the perfect atelier to house the self-named brand. He says that he finds no interest in working with other fashion houses – he doesn’t want his previous employment to have too much of an impact on his own creative aesthetics – it’s easy to get labeled by the brands one’s been working for.

My impression of Erik, is that he’s a very humble guy with a huge amount of talent. He’s the first true shoe nerd I’ve ever met and he puts 100 % of his time in to his work. Let’s just hope there will not only be men’s collections created in the future. I know many women who enjoys the sound of both rap and classical music.