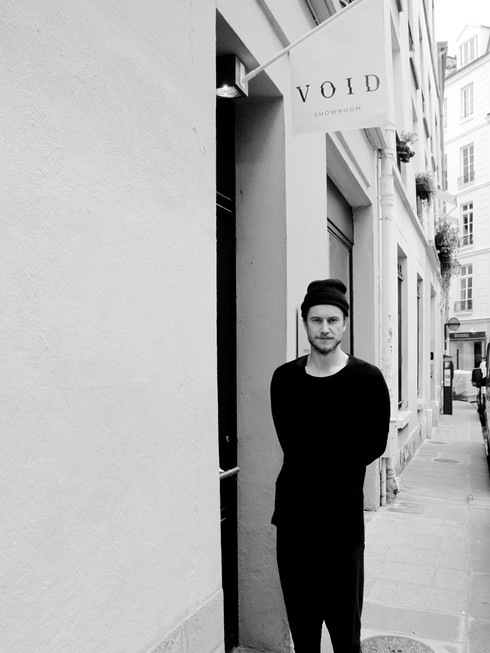 It’s Paris Fashion Week. The sun is shining and the streets and the brasseries are crowded with people, carefully dressed to look flawless from every angle and casually balancing an espresso in one hand while instagramming with the other.

I’m on my way to meet up with the Danish showroom owner and curator of VOID, Esben Leschly Blegvad, to talk about how to support young designers, creating a collective space where everyone complements each other without competition; and how one should always follow his or her intuition.

FE: Tell me about VOID.

ELB: We started in the season called Spring/Summer 13 in a teeny tiny location of 25 square meters. Autumn/Winter 13 we moved to a location of 90 square meters when the owner of that place suddenly sold it without our knowledge, so we had to move. Then we moved to a bigger location where we stayed for two years; and now we’re here at 8 rue Debelleyme. It’s a big location, 300 square meters, 20 designers, lots of action - the development has been great.

FE: Did you first start here in Paris?

ELB: Directly yeah. It started out just being a collaboration of two brands showing together and we had to call it something. But then, realizing that two labels of our size weren’t generating enough traffic for either one of us to make a living. And I figured that if we were ten designers of similar size and way of structuring the company, we could grow together. It’s the same setting now with the designers here today.

Together we can help each other rather than competing. People get this familiar feeling in the showroom and want to support and help each other. Like this jewelry brand just had this little leather pouch for his jewelry designed by the designers upstairs so it’s this mutual understanding of helping instead of seeing the others as competitors. (Am I doing better than they or are they stealing from me.) People get so paranoid in this industry.

FE: Especially in showrooms? When you see other pieces so close to your own?

ELB: Yeah and obviously there are some designers that still do compete, but they come here and throughout the week they learn that they don’t have to. They see that they can grow together. And also having buyers that buy multiple labels from the same showroom makes them stay longer instead of having one appointment here and there and spend 30 minutes in one place and then just end up running around. We have a lot of strong brands at one place and the buyers often stays like three or four hours in here and really talk to the designers and sometimes it leads to an order.

FE: Do you have a background in fashion or how did you end up with this?

ELB: The short story is that… I opened up an office space in the town where I live, to share creative spaces with people in every sort of industry and in that office space there was this guy who needed someone to do something in his company, like PR or sales, and help him establish his business. He just came out of design school and didn’t know what sort of direction he wanted to go so I became his brand manager and helped him build it all up. And knowing that Paris would be the best place to position for sales, I came to Paris and once there I realized that there was a huge gap from what was here in terms of renting your own little space and being a designer on your own.

And then going to a showroom - the bigger ones charging a lot of money and the trade shows are charging even more so there was no sort of solution in between. Whatever you would do you would end up spending a lot of money on little. Here at VOID prices are so reasonable that everybody can afford it, I hope…at least it seems like it haha. So my way to being a showroom owner and curator started out as being a brand manager for one single brand.

FE: Is this brand still represented at VOID?

ELB: No, they went to Tranoï (a trade show during fashion week in Paris, editor’s note) because, through this showroom, they grew to a size where they needed bigger space and bigger buyers and had the money to be displayed there. And then we have some other designers who have grown to a size where they want to be in their own showroom and have their own traffic of buyers. So it’s nice to see them growing. Because that is the essential thing, we want to help people to get on their own path where they can expand their businesses.

FE: How would you describe the typical brand that you work with? I can definitely see some kind of theme going on in here.

ELB: I think the typical designers in here don’t necessarily have one background as a designer. They all have different entrances to the fashion industry. Many of them have done art, music and architecture before they studied design or even just established their own company and label. So the different backgrounds are similar in that they are not fresh out from designs schools. They have this other perspective on design and you can see that and feel that because of the very well done collections. The craftsmanship is there and the understanding of viewing it not as a commercialized big business but also as having a soul, if you can say that?

FE: You and the showroom are here in Paris both during women’s and men’s fashion week but which one do you prefer?

ELB: We started only doing men’s and did that for three seasons and then we started with women’s as well because there was a request for it. Women’s fashion was a lot tougher to break down the door into. There’s a lot more going on during the women’s fashion week and everything is bigger. There are so many showrooms and brands in Paris and now this season for women’s fashion, it’s just been amazing- a really good turnout. There are strong brands, strong buyers but it has taken a year and a half just to establish oneself and this showroom during this week compared to the men’s where it all just sort of happened from day one.

During men’s week there are fewer buyers but they have more time to spend in each showroom and to talk to the individual designers so for us, the men’s have been stronger in terms of buyers and business. But now I would say, seeing the result this season and being on the third day as we are now, it’s completely evened out.

FE: Are there a lot of showrooms in Paris like this one that focus on the same kind of designers and aesthetic expressions?

ELB: I don’t know. I don’t compare myself to anybody or try to structure my business around anything else, it’s all based on intuition and good feeling. Both with the brands that I book and the way that I structure everything and if the good feeling and good vibe isn’t around then I just don’t go with it.

FE: So there is 20 designers here today, what does the process of finding the right designers look like?

ELB: A lot of designers are continuously showing here again and again. It’s Mads (Mads Dinesen, Danish fashion label based in Berlin, editor’s note) fourth season with us and he’s doing both men and women so it’s his eighth time here. And Rene (Rene Gurskov, Danish designer, editor’s note) has been with us since day one so he’s been here throughout the three years that we’ve been going.

We have a lot of reruns but now I started out inviting designers that I thought would be nice to have here and work with. And now, for the past year I’m just getting bombarded with emails and requests, so now I’m screening everybody and then just looking at all the materials and from there just going with the feeling. It’s a long process.

FE: You went to New York a few weeks ago, what happened there?

ELB: We’ve been contacted by Coterie which is the biggest fair in New York. They wanted us to curate an area on the fair and set it up as VOID showroom in New York and do what we do here with the designers. So we’ll see, we went there for some research and got invited to see what they were doing and obviously, getting an invite in New York - you don’t pass up that opportunity. So it was a research trip to see what options we had for our brands and also for VOID as a brand, if it’s even possible.

ELB: I have a meeting in 30 minutes to evaluate the New York option and they have brought the whole entire team. As a European showroom and a small company you don’t have the manpower and the knowledge of how to do press and PR in the States. We have a lot of American clients coming here to buy but the American buyers that come to Paris don’t buy in New York so we need to get the broad clientele of the more commercialized stores for our brands. And also just having our name there may help us grow even more over here.

FE: So the plan is to work with VOID as a concept and expand to other countries?

ELB: Yeah, being in different countries, but it has to be curated really really well because Coterie has this area of 12 000 square meters. One day we were walking just aisle after aisle and we spend five hours and just saw a third of it so you really have to do something special and specific not to drown in the mass. That’s all the thoughts and processes around New York right now. If it’s going to happen it has to be done well. 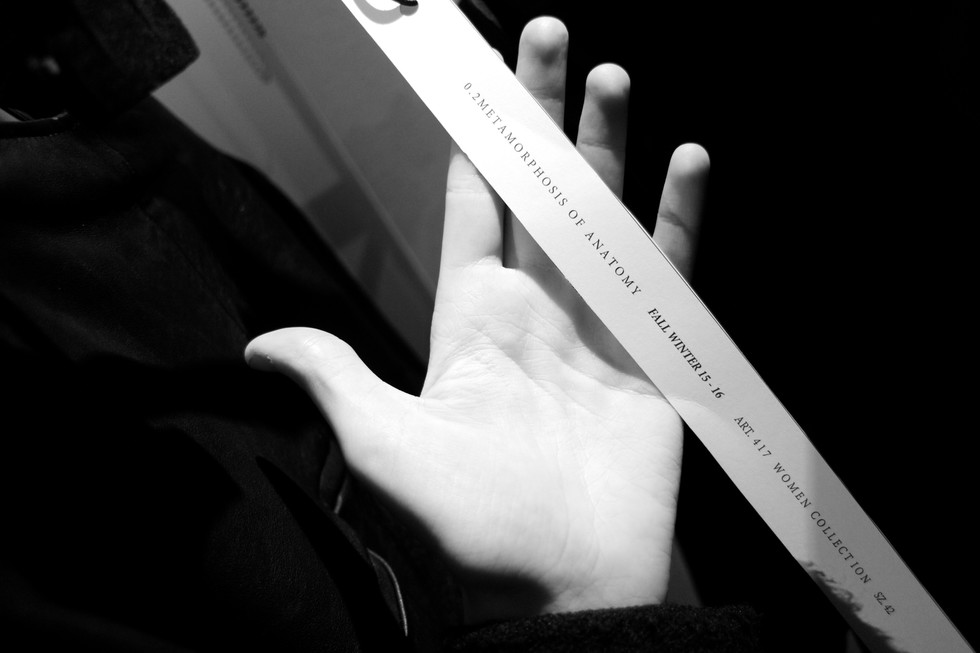 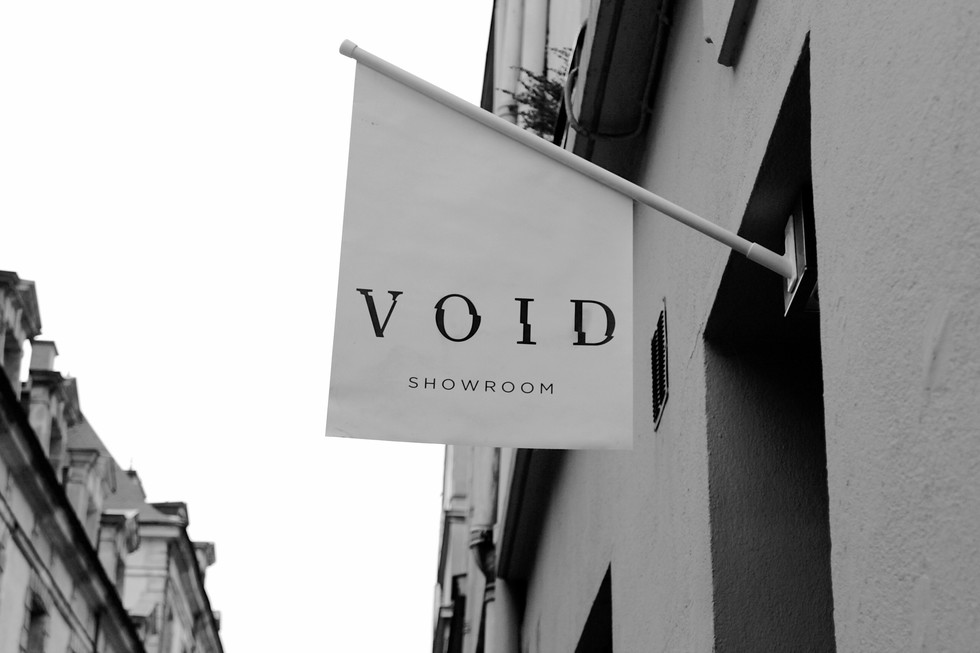