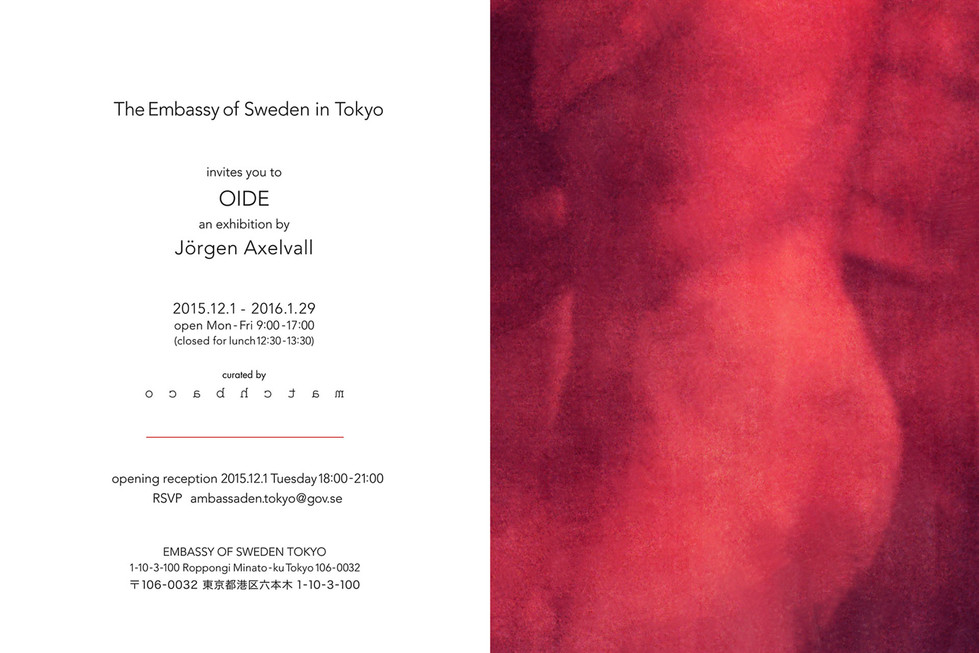 OIDE is the title of Jörgen Axelvall’s latest art project. The work in this series has evolved over the course of many years and consists of both new and old images with varying subject matter but all are united by the unique method; how Axelvall treated them, and all images are done using Polaroid instant film.

The project and the concept came about from Axelvall’s fascination with details and his love for abstract imagery. What you see in the finished image is a mere fractional detail of the original Polaroid.

OIDE is a Japanese word and expression and translates roughly into “come closer” - as in how a mother would call to her child when she wants to share something important or when she would want to keep her child in a safe and close proximity.

OIDE, when used as the title for this project, refers to Axelvall’s attempt to bring the viewer closer into the images and see the secrets being revealed once you focus on a detail. There is nothing random about the selected detail. It has been done very carefully in order to find a visually interesting composition and the right esthetical balance. At the same time the final images remain true to the original Polaroid, without any color alterations or digital manipulation.

An important aspect of this series is Axelvall’s desire to challenge the way we look at photographs. Photography can be so much more than a depiction of reality. The word Photography literally means, “drawing with light” and some of these images can be seen as nonsensical abstract drawings where as others give you a clear hint of a face or a portrait. The “real picture” in these photographs is not important; the viewer’s own perception, feelings and fantasy are.

Jörgen Axelvall is a photographer and artist from Sweden currently based in Tokyo.

Before moving to Tokyo in 2011, Axelvall lived and worked in New York City for 15 years.

In September 2013, Axelvall was the international winner of the prestigious New Exposure Award presented by US Vogue and Bottega Veneta. The exhibition and award ceremony was held at Openhouse Gallery in Soho, New York City.

In March 2014, Jörgen Axelvall published his first monograph together with an exhibition and installation at Idol Aoyama in Tokyo, titled Instant Moments, and in June 2014, Instant Moments was shown at the Swedish Embassy in Tokyo.
In October 2014, Axelvall had a solo exhibition titled Always Looking through Glass at 0fr. TOKYO Gallery.
In November 2014, Axelvall’s seven-year-long art project I was looking for Park Hyatt Tokyo materialized into an exhibition at Park Hyatt Tokyo with the simultaneous release of a limited edition photo box, designed and art directed by world-renowned book designer Satoshi Machiguchi.
On opening night it was announced I was looking for Park Hyatt Tokyo was chosen as a Jury Selection by the 18th Japan Media Arts Festival and was again shown at the National Arts Center in Tokyo in February 2015.