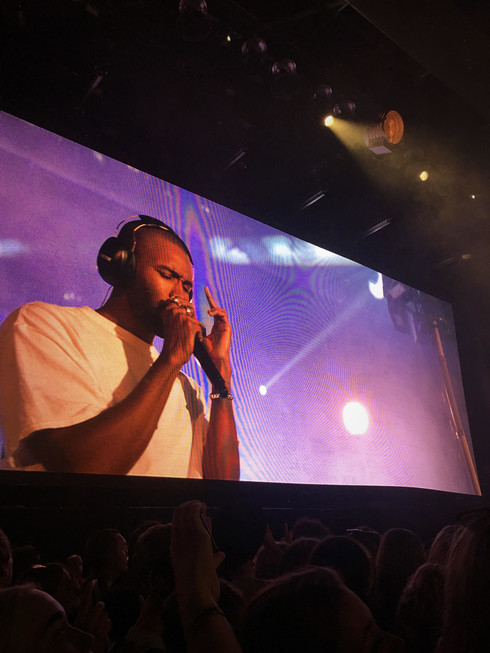 I will never forget Way out west 2012, standing on one of the infinite rooftop parties, when the crowd suddenly went silent. One of the hosts had gotten hold of a microphone and, as if announcing someone’s death said, “We have just received news that Frank Ocean has cancelled his performance tonight.” The announcement was followed by a loud, collective cry of disappointment and actual sadness. For the rest of the party, small talk and speculation about Frank’s health and happiness was the given ice-breaker. And those who had missed the viral success of Channel Orange had become curious about who this Frank Ocean character was where wondering for the last time. Over the following years, Channel Orange became a modern classic - and t-shirts reading, “FRANK OCEAN IF YOU’RE READING THIS, WHERE’S THE ALBUM” were printed in anticipation.

Since then, we’ve watched him grow and conquer so much, developing into a truly original presence in the industry. The minutes before he enters the stage we turn into the same crowd we were five years ago, “the Way Out West audience” is who we are and we were let down once before. Frank Ocean at WOW in 2017 has a parable of the prodigal son vibe from start. As if as long as he appears and stays with us for a while everything and anything will be forgiven, and we’ll be ready to shower him in all the love we’ve stored up. And he does show up. And he shows us he’s vulnerable, thanking us for supporting him while he gets the hang of it, playing to an audience again. He stops the music for do-overs a few times and comments on his own voice breaking. Wearing headphones, and a white T-shirt with a quote by the English comedian/actor Marcus Brigstocke on the back that read “Computer games don’t affect kids, I mean, if Pac-Man had affected us as kids, we’d all be running around in dark rooms, munching pills and listening to repetitive electronic music”. Frank Ocean has more than once before sported statement T-shirts (hence the T-shirt jokes from his fans), like the famous one that read “WHY BE RACIST, SEXIST, HOMOPHOBIC, OR TRANSPHOBIC WHEN YOU COULD JUST BE QUIET”, and the time he stepped out next to Kendall Jenner in a plain-looking striped one that just had “maintain the mystery” printed on his chest.
And the mystery remains intact as he keeps gazing down at his Nikes, but we really are all there to support him, grateful and humble that the introvert genius managed to defy whatever demons he’s been up against. Like typical soccer moms, we already know what he’s capable of and will oversee any mishap. But we hardly need to, the music and his voice that everyone has a private relationship with, puts us under his spell.

Ocean sticks mostly to songs from the 2016 BLONDE album, consisting of mainly soft atmospheric keyboard tunes, and then breaks it off with a few older hits. Singing along to “Thinkin’ bout you”, an experience we were deprived of in 2012, really was the perfect team building experience for the audience on the festival’s first night. When whirling clouds in shifting colours are projected in the air above us, the universe that Frank’s body of work has created encircles us completely and I only wish he’d sang Pilot Jones at some point to ensure us that, “if I got a condo on a cloud, then I guess you can stay at my place”.