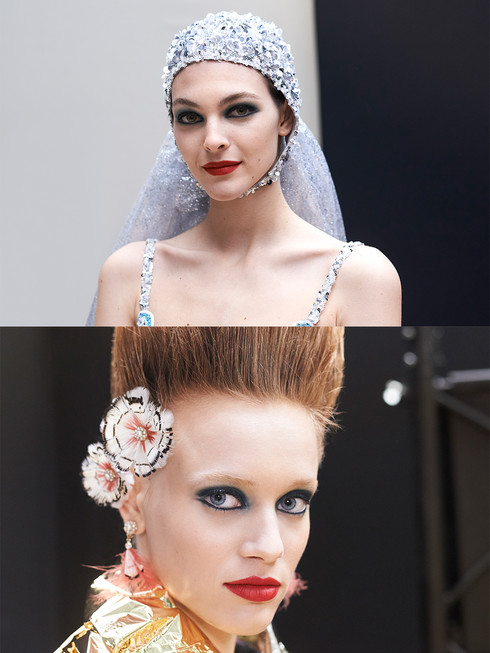 The Grand Palais was transformed into a colossal Mediterranean garden,with a pool surrounded neatly by plant species indigenous to the aforementioned region. Karl Lagerfeld was inspired by the 18th century; marchands-merciers and the savoir-faire of the artisans of French Luxury. Flowers play an important role and are the heart of CHANEL’s Spring-Summer 2019 Haute Couture collection, they appear embroidered, painted, in lace, in feathers, in resin and also in ceramic, and even appear as hair jewels. ‘They explode in bouquets of pastel pink, prairie green and sky blue, and in games of black, white, beige, navy blue, iridescent gold and silver. “It’s a serene, ideal, timeless collection, that’s absolutely now, with new shapes”, says Karl Lagerfeld.’

‘Two silhouettes stand out, perched on strappy pumps revisiting an 18th century shoe. The first is long and slender: the head held high above wide boat necklines and supported by shoulders split with a hollow fold, both slightly rounded and pointed, highly graphic. Following the line of the body, lengths run to mid-calf. The second is more flowing with voluminous bell and corolla shapes, full skirts and the bust enveloped with straight or balloon sleeves.’

With the refined looks such as shouldered jackets with boat necklines and skirts falling  calf-length, ‘wraparound skirts cut to the knee, the braid quite literally melts into the fabric: embroidered into the tweed, the lamé wool or the grain de poudre, it further amplifies the pure line of what Karl Lagerfeld is calling “the new CHANEL”.’

Jackets are lengthened, others are collarless with a folded lapel, some belted high from a peplum, and ones with aged leather and some shorted like a spencer jacket, some adorned with feathers.

Unique braiding highlights the graphic structure of the silhouettes on the dresses. , reverse pleats appear on the bust and on the hems of the dresses. Big bell skirts in matt satin are pulled to the waist opening like flower petals at the front and over the hips. A second colour appears as lining.


On the dresses, reversed collars give the impression of a bolero. Here the braiding highlights the hyper graphic structure of the silhouette. The reversed pleat reappears on the bust and the hem of the dresses with big bell skirts in matt satin: pulled to the waist, opening like petals at the front or over the hips, they are lined with a second colour or with floral seedlings.

‘Other dresses in sequinned silk faille are adorned with a lateral train inversed and flounced in lace, raised to the waist. A big dress with a pink lace skirt painted by hand has balloon sleeves finished with flat bows and ruffles cut into the serrated edge of the lace. Another in hand-painted blue lace is embroidered with ribbons laid like stripes. A flounced godet lengthens a skirt worn with a peplum top. The skirt of a suit in crêpe lamé is embellished with a burst of torn tulle.’

Each dress took up to 350 hours of work; flowers made from feathers, organ pleats are gathered thread by thread, hand-sewn lozenges of silk blouses are held in place by 650 beads and an entire sequinned suite in patterns inspired by the porcelain of the Manufacture de Vincennes are all incredible works of art. And a finally the finale look, à la Karl Lagerfeld where the bride breaks all the rules, an embroidered swimsuit and swimming hat under a silver sequinned white veil. 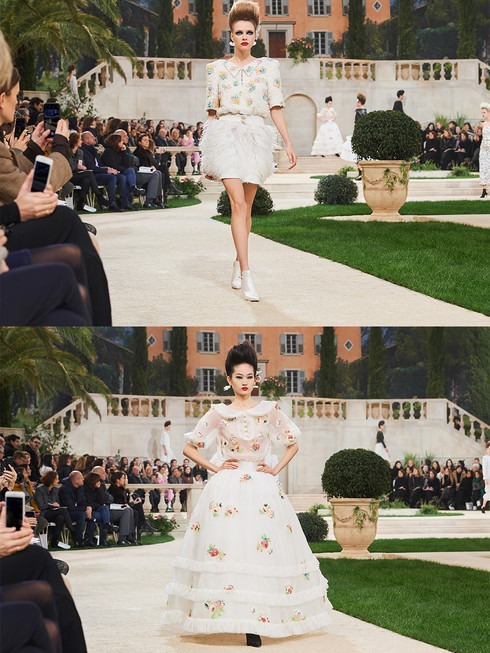 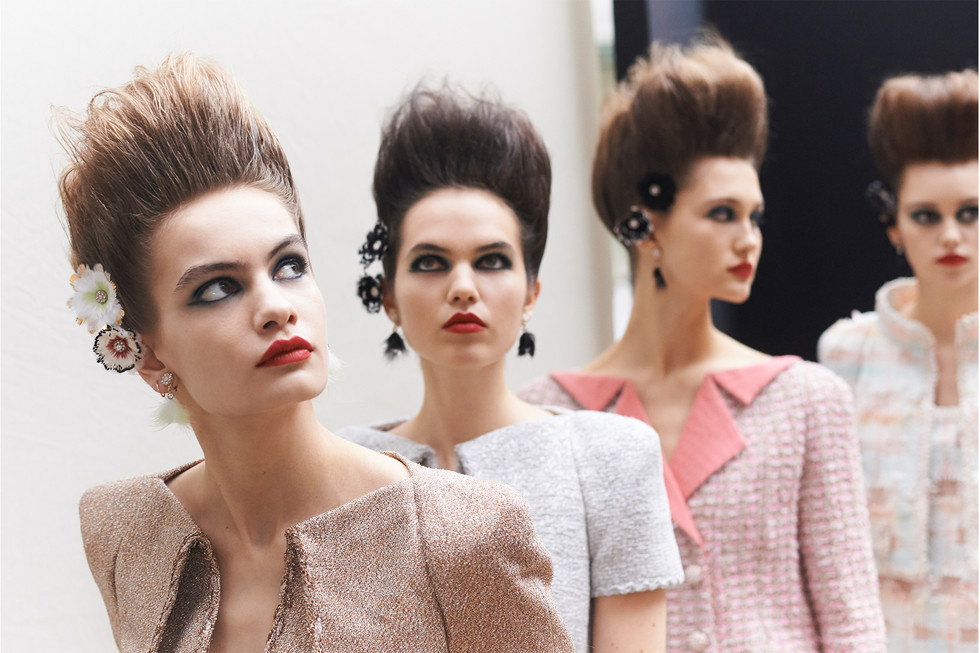 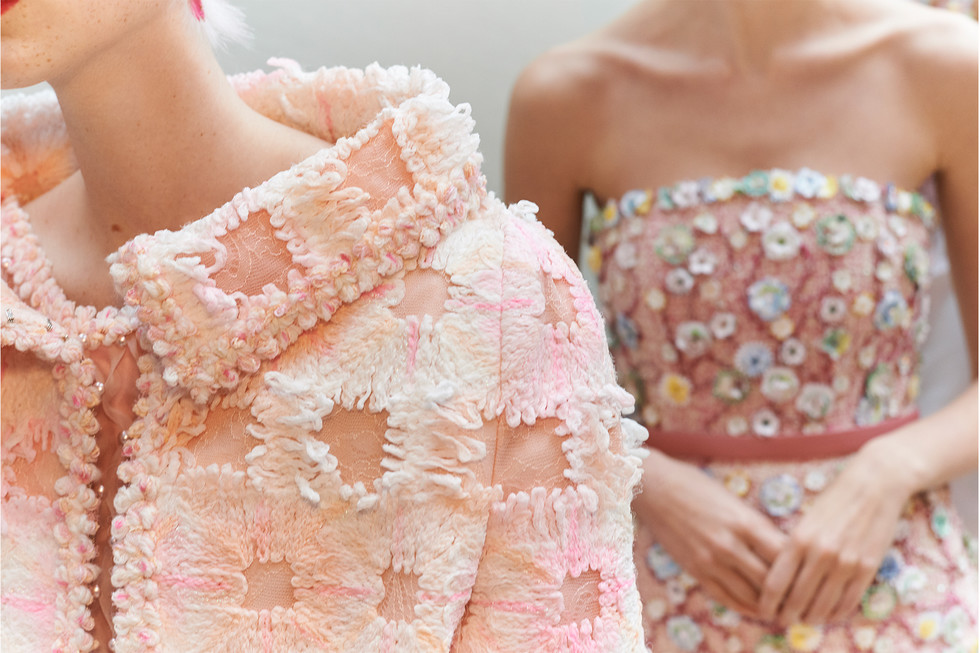 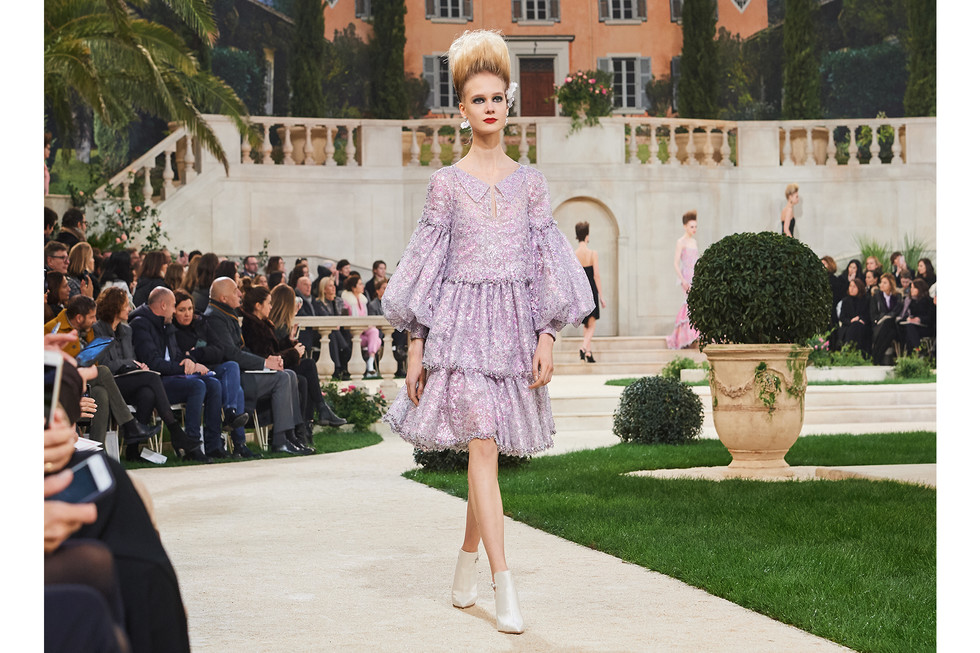 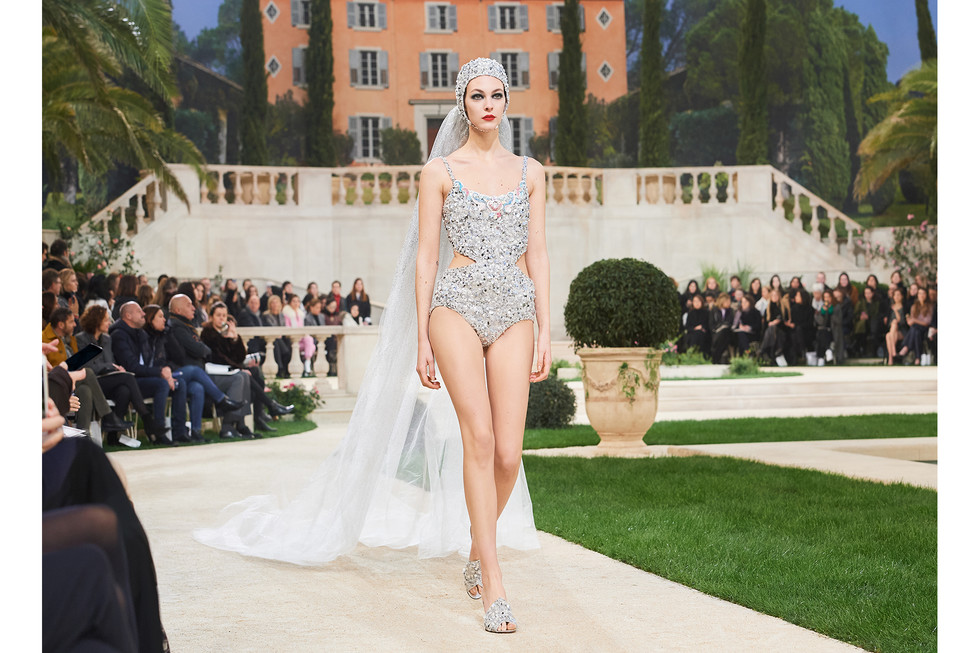 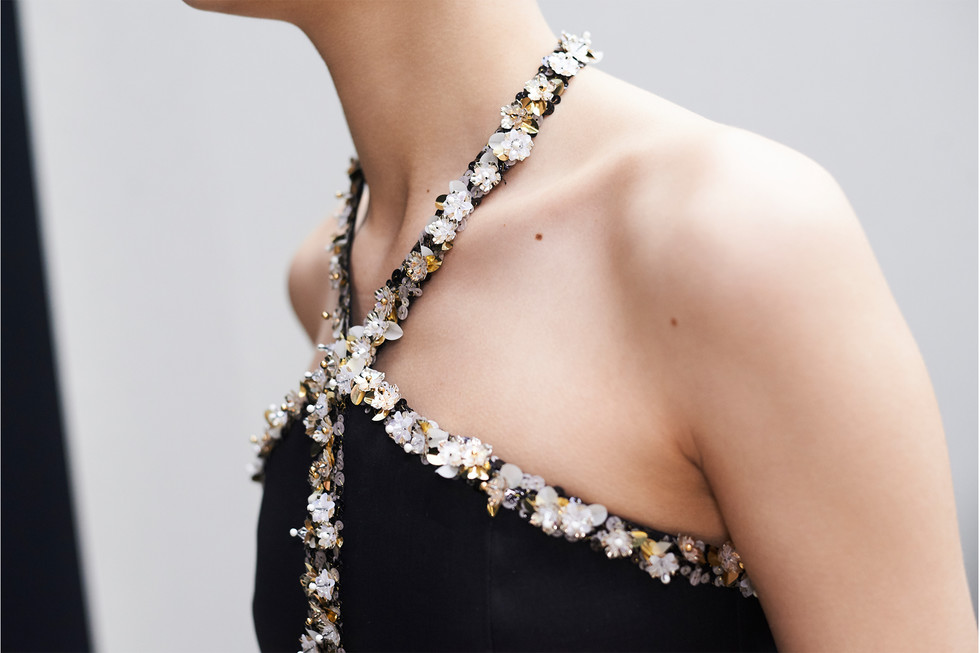 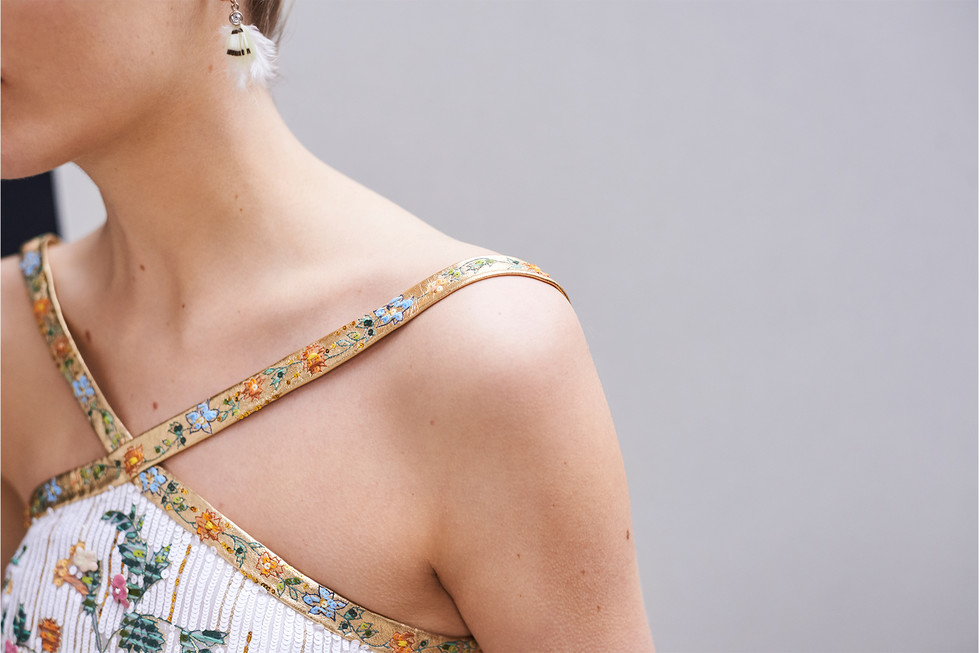 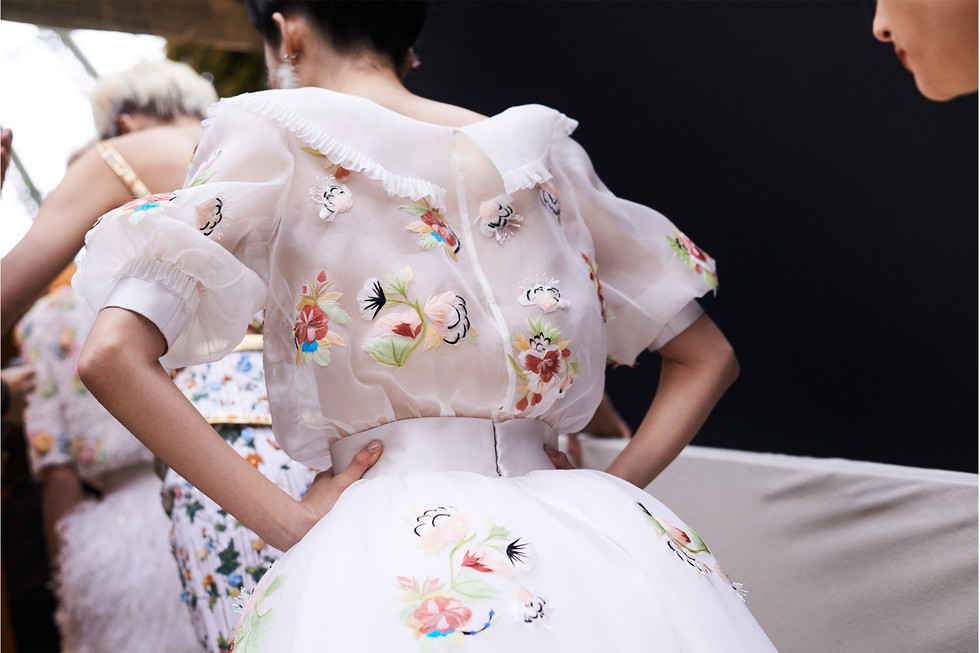 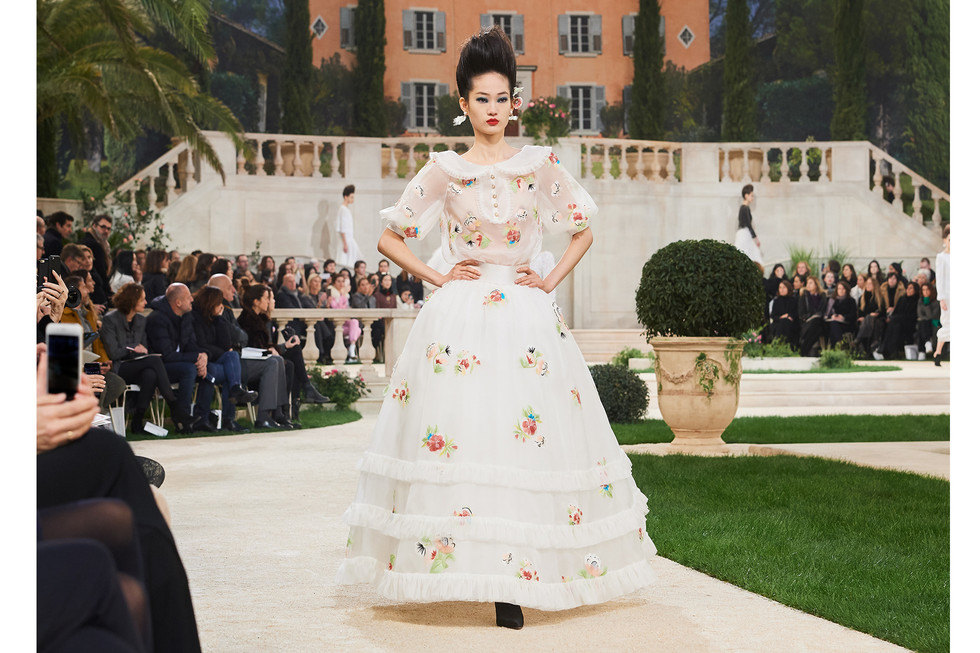 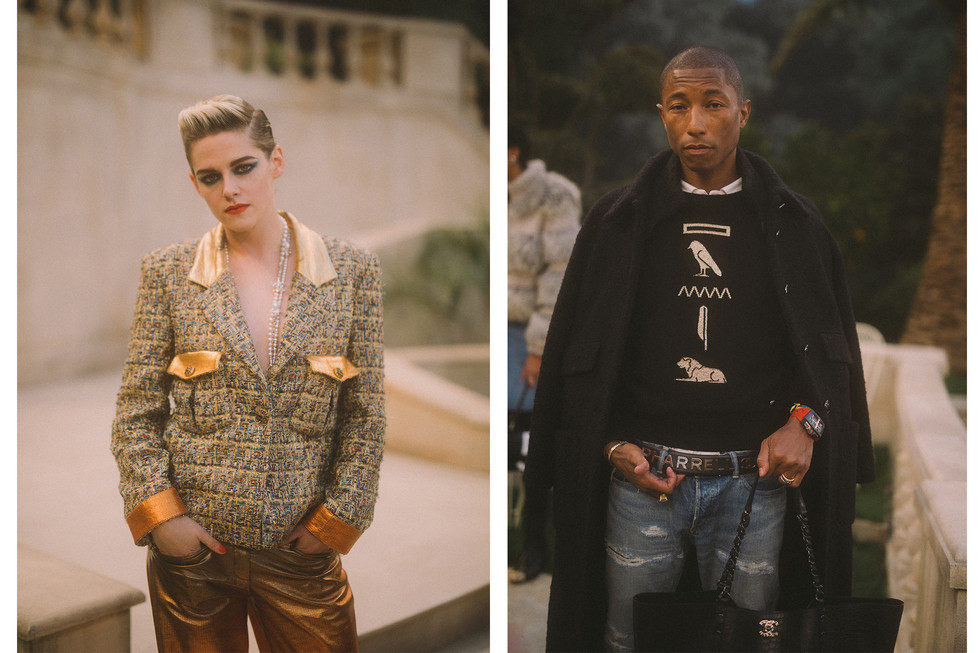 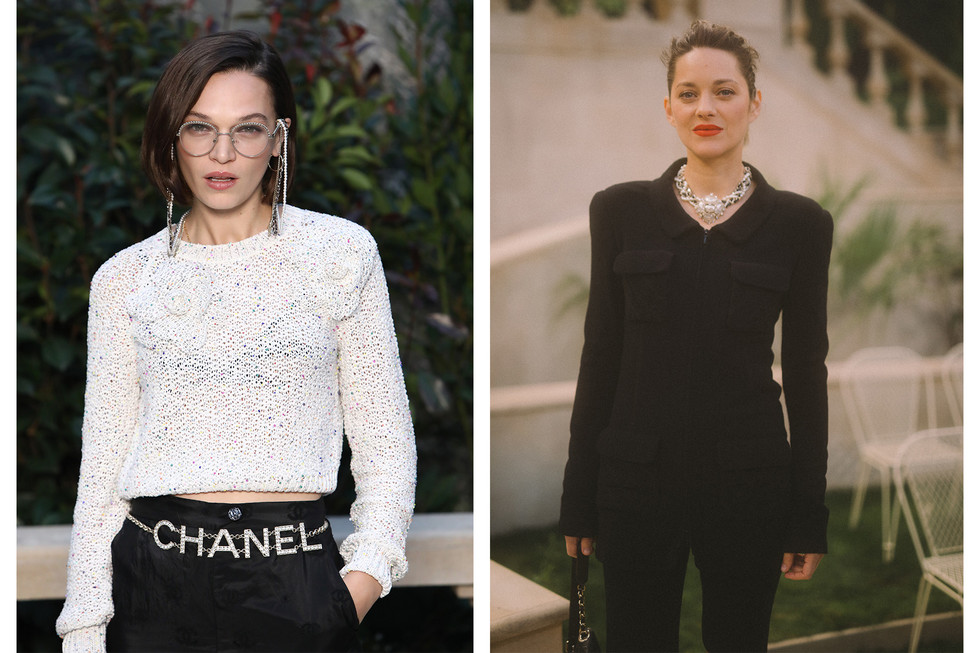