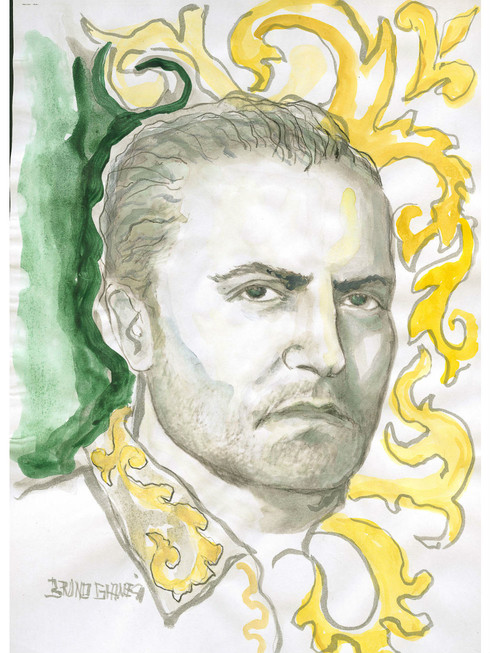 “For Hegel, freedom was not just a psychological phenomenon, but the essence of what was distinctively human. In this sense, freedom and nature are diametrically opposed. Freedom does not mean the freedom to live in nature or according to nature; rather, freedom begins only where nature ends. Human freedom emerges only when man is able to transcend his natural, animal existence, and to create a new self for himself.”
— Francis Fukuyama, The End of History and the Last Man

Experiencing the full blossom of his career as a fashion designer during the 1990s, Gianni Versace  seems to have brought together freedom and nature. By breaking the rules and expanding the borders of the acceptable, he used his creativity as a remedy to build an empire, where history would become the starting point of searching for future fashion in nature and in freedom. It was never about vulgarity of glamour but a celebration of the human nature, shaped by the past, and instinctively longing for a future. Curated by Karl von der Ahé, the exhibition ‘Gianni Versace Retrospective’ at the Textile Museum of Sweden in Boras has introduced Gianni Versace’s unconditional reverence for Italian culture with its beauty, hospitality, playful landscape, colour palette and craftsmanship traditions.

A fastidiously created narrative within the frame of the exhibition space, depicts an image of Gianni Versace that extends beyond our ordinary comprehension of the fashion designer and his creations. His cultural legacy is reflected upon in the garments, which with time have been transformed into art objects, to a significant extent scrupulously amassed by a prominent Versace-collector Antonio Caravano.  The collection has changed Antonio’s life by adding a deep cultural meaning to it. Former Versace’s chief designer Bruno Gianesi has eternalised Versace’s fearless freedom of creativity in his fashion sketches and drawings from the 1980s and 1990s. Once, discerning Bruno’s artistic talent, Gianni offered him a post of chief designer at his fashion house. That circumstance made Bruno reconsider his entire career choice by following his heart and becoming an artist.

Furthermore, Versace was one of the first luxury brands that dared to penetrate post-Soviet Russia by opening their first store in the center of Saint Petersburg. The aesthetics rapidly became an established dress code in the ‘Nouveau Riche’ circles. However, Versace also became a certain cultural symbol for freedom, where everyone could suddenly see their own individual purpose.

While interviewing Karl von der Ahé, Bruno Gianesi and Antonio Caravano, I could hear how much the personality of Gianni Versace with his incredible inner freedom means for each of them. They find something very personal and unique in his legacy, what creates a significant essence, evolving into something new. Ostensibly, Gianni Versace is not about the end of history but about its pure fearless reincarnation in a new contemporary context.

Bruno, what was the philosophy of Gianni Versace’s brand, when you worked with Gianni?
Bruno: It was all about beauty, which was the essence of everything, every collection. Gianni was obsessed with beauty, not the classic one but the real historic beauty that can transform into a futuristic one. He was a man of no limits, fearing nothing, very open-minded. We always started from the past, glancing at the Italian culture and considering how we would translate the latter into the future. Greek drapery framed in a new interpretation of Gianni, embellished with for example art of Kandinsky, Picasso, Warhol, creating optical nuances was our foundation.

Karl, how was your and Antonio’s idea of creating a Versace-exhibition evolving during the production process?
Karl: Our first idea was much simpler than it looks today. We happened to meet prior to the 20th anniversary of Gianni’s death and the fashion house’s 40th anniversary. When I read about these particular dates and thought about Gianni Versace’s last exhibition in Berlin in 1994, which he curated himself, I was struck with an idea. Antonio had this incredible collection, which had never before been shown to the world, excepting few pieces.

Antonio: My first much smaller museum exhibition took place at The National Archaeological Museum of Naples. However, while the exhibition was ongoing, we had already started preparing for the next much bigger one in Berlin, in a completely different location in Europe. The Museum lies within the Magna Graecia (“Great Greece”) area. Southern Italy was a great source of inspiration for Gianni Versace, what also could be recognised in a number of outfits presented in my collection.

Karl: Thus, we had a certain route to follow with the final destination in Berlin and later Boras. The advantage was that I had lived in Berlin and knew my bearings there. Our decision was to make a retrospective, gaining some structure in it. However, a structure is thoroughly dependent on the construction of a building, where exhibition would take place, the target group and the collection that is to be displayed. Seemingly, we had to bring all those three elements together and difference between Berlin and Boras has been significant. In Berlin it was a bigger exhibition than in Boras but the approach was slightly more general. Meanwhile, Boras offers a smaller exhibition space, what makes this show more focused. We had to sit together and discuss themes, questions, interesting aspects of Gianni Versace’s work. Personally, I like this exhibition very much because you can focus on such things as Magna Graecia for instance. That was the beginning, where you always have a good spirit. But next step requires a more strategic approach. The main general theme was thinking without borders, although it had to be adapted to the cultural spirit of the country. Therefore, we decided to make it more focused and visually intercultural at the same time. Ostensibly, Gianni’s personal creative limitlessness had to be put into a concrete cultural context and to be interpreted accordingly.

Karl, what was the biggest challenge during the creative process, preparing the exhibition in Boras?
Karl: My background is in cultural sociology and history. That is what I like and therefore, I am always eager to discuss things. Here we have a designer from Italy, while I am German and we are all in Sweden. It creates an interesting context, where we have an opportunity to learn from each other. What I have learned is that in Europe we are able to understand the European art history without any further declaration. And I have also realised how much Italy brought into Europe through Magna Graecia, Romans, Renaissance, Barocco. It was so much before Italy actually became a state. Culture has always been the identity of Italy and it survived by the culture. Both Germany and Italy were parts of the Holy Empire but they were not actual states. However, when they became states, the cultural traditions were still there. Even take the example with Milan and Naples, where Milan constituted a part of the Holy Empire, while Naples did not. You still fill the different cultural backgrounds.

Antonio, how did you start collecting Versace-garments and why?
Antonio: It is very emotional question and the answer is on the bottom of my heart. I started my collection in January 1998, after the designer’s death. I was a young boy living in Miami, where I saw Gianni Versace several times. When I found out about his assassination, it affected me tremendously. I was in chock. Somehow, I instinctively felt that I should start to collect Gianni Versace’s pieces. Today my collection counts 4022 pieces.

Bruno, you have made a few theatre productions during your time at Versace. Is there any production that you remember the most?
Bruno: It is definitely the collaboration for ‘Pyramide’ (1990), a ballet directed by the French choreographer Maurice Béjart and his Béjart Ballet Lausanne. As an artist, I consider theatre to be of great importance for my work. For ‘Pyramide’ we conducted a tremendous research and even travelled to Egypt, where we performed the final rehearsal. Afterwards, we used our findings and inspiration from the costumes that we had created for the performance, in Versace’s future collections, translating theatre into fashion through our previous work.

Bruno, originally you studied economics and later you radically changed your direction. Gianni Versace has something to do with it. How and to what extent do you think he has shaped you as an artist?
Bruno: Well, my father never wanted me to be an artist, but I could become an engineer, lawyer or economist. Gianni let me become an artist through my work, by doing, while drawing a new collection, doing research for a theatre project, preparing an exhibition. Curiosity is the key and I was curious.

What have you personally discovered, while working on the exhibition, first in Berlin and later in Stockholm?
Bruno: I could return to the past and recall my time with Gianni, comparing it to my current life, which is completely different than it used to be then. It was very enjoyable to “step into the same river twice”.

Antonio: For me it is an opportunity to improve myself.

Karl: I think, in a certain way it was about coming back in time, as for Bruno, remembering when we were young at the 1980s and 1990s. There was a world before the world we have today, both in fashion and in general. I feel that we have lost a lot on the way. Today there is too much marketing, too much talking but not much friendship and reliability. All the production that could be performed in Italy and other places in Europe is now relocated. It is about going back, while thinking about the future as Gianni Versace did in his approach to fashion. He went back, re-thought it and created something new. His blossoming was in the 1990s, when we thought that it was “the end of history”. Now we see that it was not the case and there are new ways to travel and to communicate, but we lost a lot on the way. This is what I have learned. 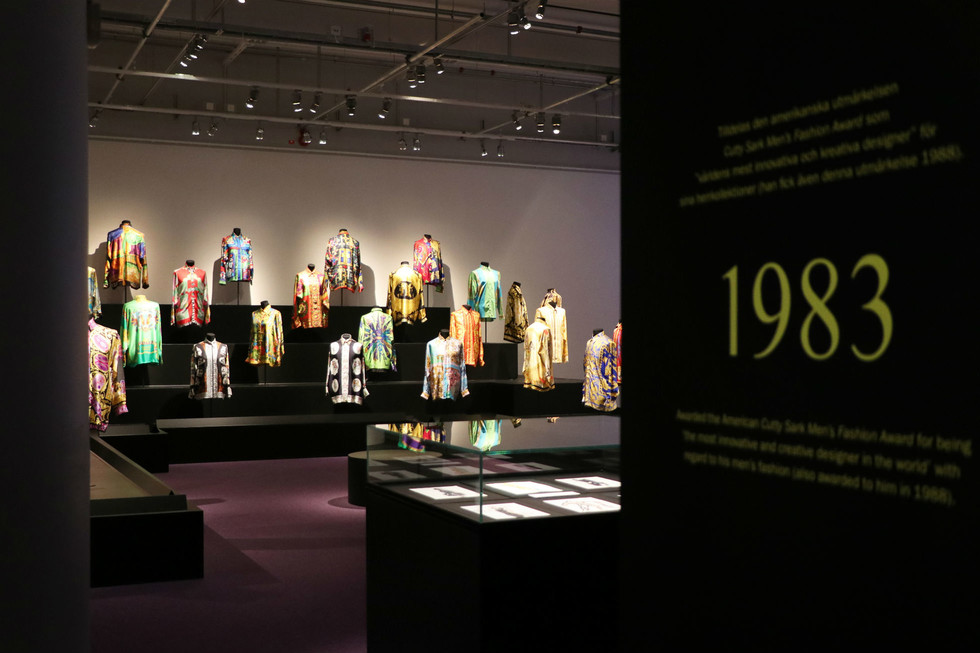 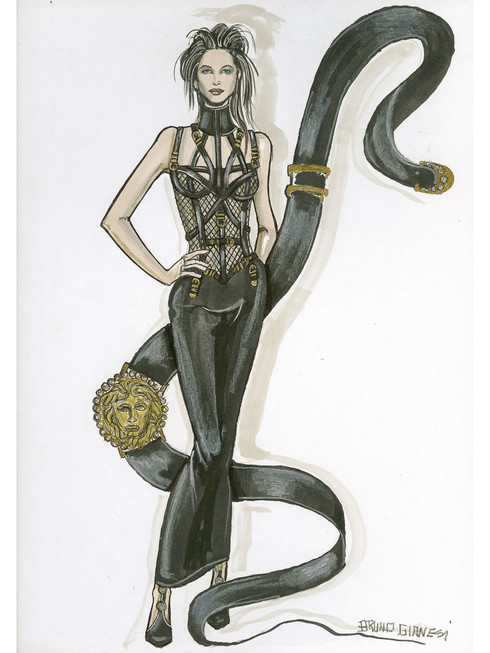 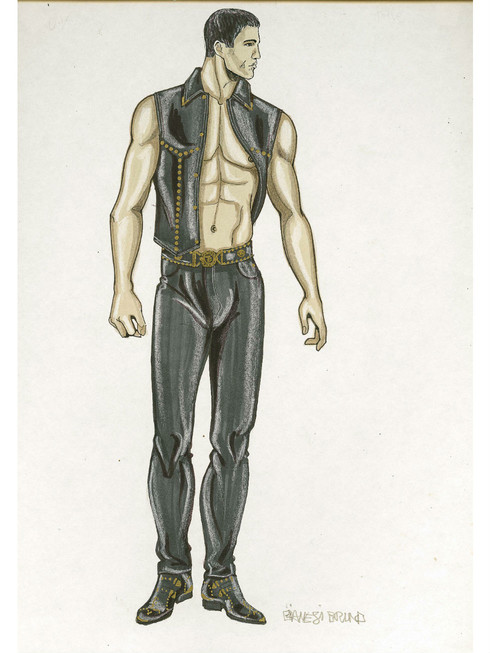 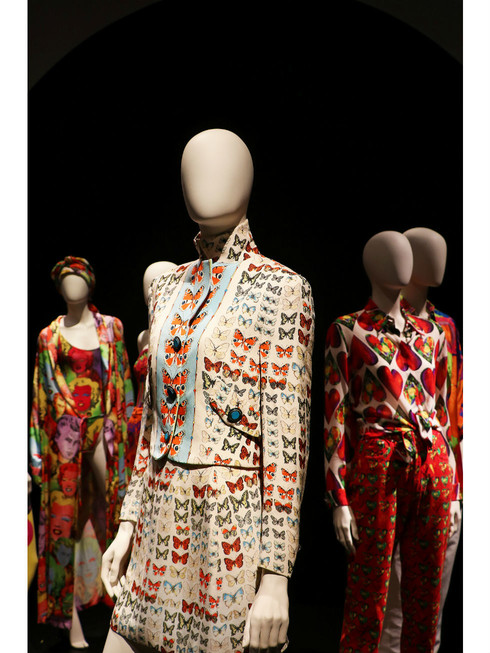 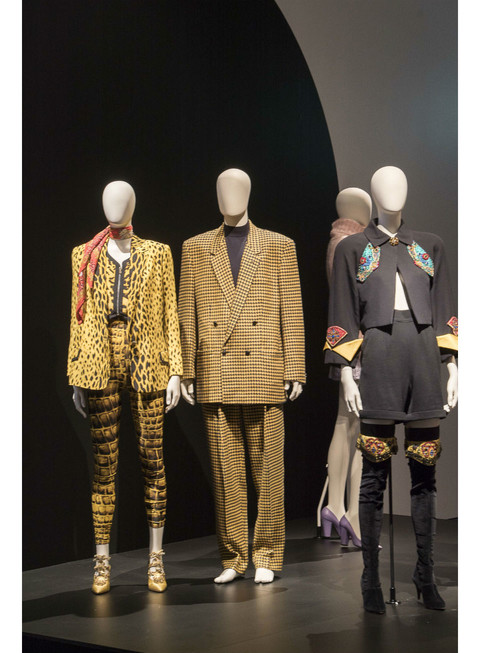 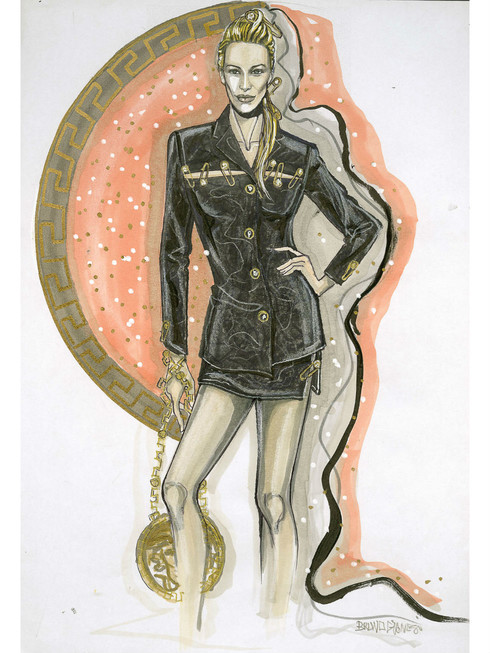 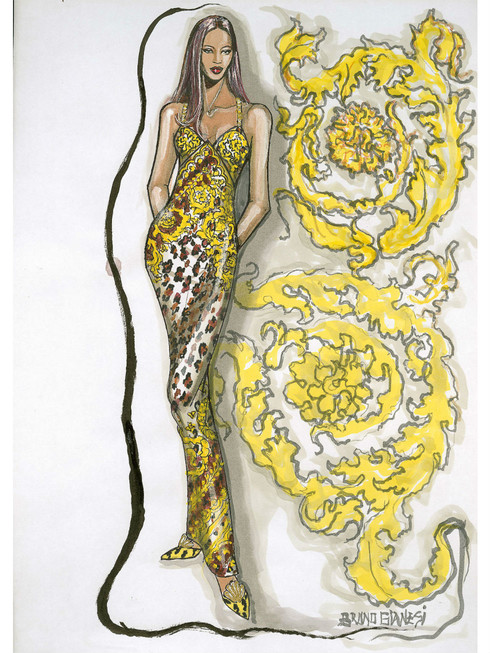 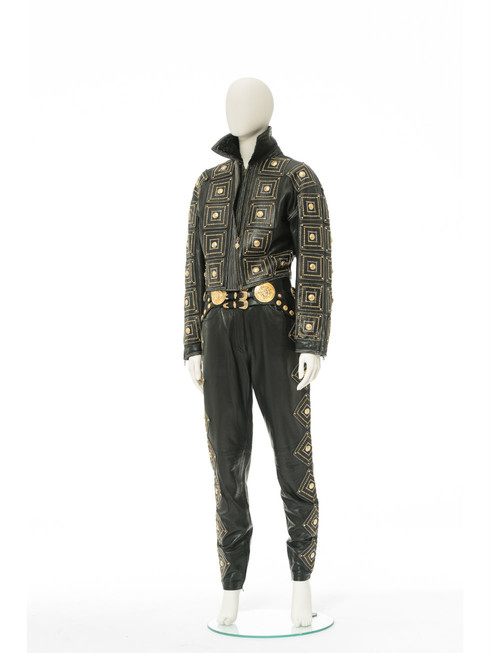 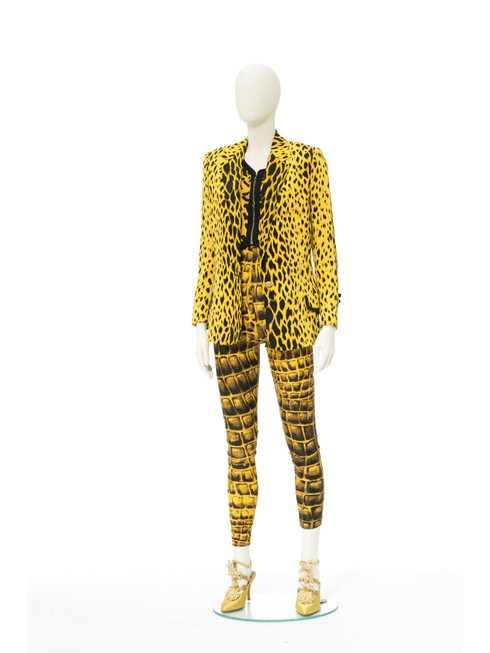 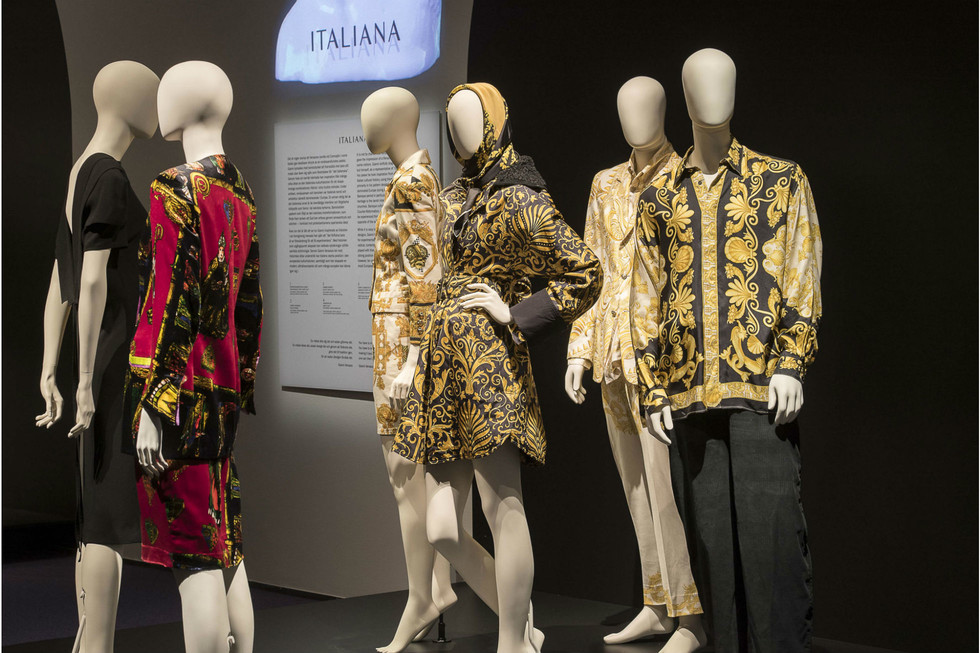 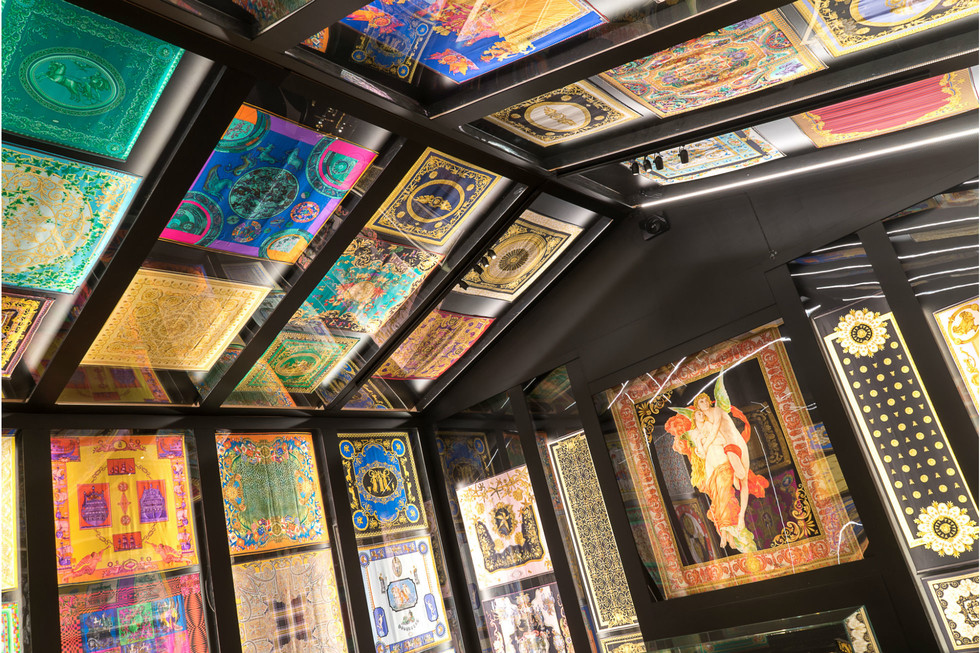