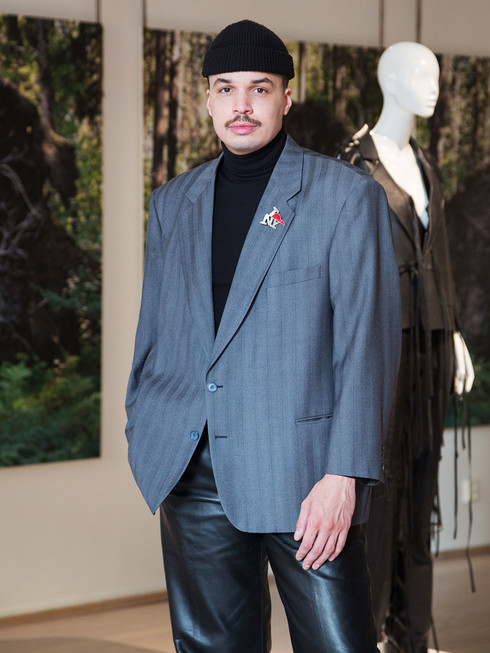 Ervin Latimer is a Finnish designer who won the prize for Young designer of the Year 2020 and has a background in high fashion. He was design manager at Heliot Emil and ended up a finalist in the prestige filled H&M Design Award to name a small part of his background. Alongside fashion and other creative projects, Ervin has always been an activist and fighting for human rights as well as diversity and presence within the fashion industry.

Your winning collection has a story to tell, can you tell us this story?
The miniature collection I designed for the Young Designer of the Year Award makes a point about gender diversity and fashion’s role in the performance of gender. The task for last year’s competition was to design clothing that has multiple ways of being used. I have a background as a drag artist, and I’m fascinated how clothing can be used to highlight or obscure one’s gender identity. I decided to design apparel that start from traditional binary pieces of clothing such as masculine suits and feminine dresses that can then be taken apart, mixed and put back together. This creates a spectrum where one can place themselves, however they see fit for their gender identity and style. It is a celebration of the multitudes of gender.

What inspires you?
I find fashion as a tool for discussion just as any other medium such as writing, which is another passion of mine. Themes such as masculinity, brownness and queerness can usually be seen in all my creative work, so there is a core source of inspiration there. I could easily list you things that sound very prestige, such as photography books, exhibitions and cinema as sources of inspiration for the design ideas – and those would all be true – however equally often the ideas come from super random everyday things like memes or something strange I see when taking a bus. I keep written notes on my phone because I always forget to carry my sketchbook.

This February – March, you will host an exhibition at The Institute of Finland in Stockholm. What do you want to say through your exhibition “Possibilities of Potential Selves”?
Possibilities of Potential Selves takes a broader focus on inclusivity and representation. The visual and auditive elements that were created for the installation claim and completely repurpose a big stereotype of the Nordic fashion image: the forest. Me and the team who I’ve been lucky to work with have created an audio-visual experience, where people and identities that usually remain marginalized in Nordic fashion are now placed front and centre as the new norm. What’s important for me is that this happens both in front and behind the camera – representation also matters within the creators of these images and sounds. Everybody in the creative team are people of color and most are part of the LGBTQ+ community.
I think the installation really is an experience with a capital E. It has been designed so that if you stay long enough and let yourself be immersed by it, after some time there are new elements that you might hear or see. This also applies to the short fashion film that was exclusively created with a local Swedish team for the installation presentation at the Finnish Cultural Institute in Stockholm.

You’re an activist and fighting for human rights, what is your definition of diversity?
True diversity is about sharing power to those who don’t by systemic, structural design have equal means to it. True diversity recognizes the complex intersecting identities we all posses, by considering privileges and power structures even among the marginalized and discriminated. Most importantly, true diversity is active, not reactive. It’s not about making the right PR move to benefit oneself or one’s company, it’s about proactively supporting someone else to fix systemic injustices in our societies.
I’d also like to point out, that I don’t really see myself as an activist. I think it’s important to recognize, that due to the lack of certain kinds of representations I might be perceived as an activist, however what I really am doing, is trying to make people like me feel seen, and provide them interesting ways to reflect upon themselves and their identities. There is a difference between choosing to fight for a cause because you think something is wrong, and simply manifesting your own identity that isn’t considered normative in society, if you know what I mean. I am not saying I don’t want to be an activist, but it’s a huge problem that by simply being me I am considered one.

How do you show diversity through your collections?
For me ethnic and gender diversity is a given, I wouldn’t even know how to present things in any other way. I hope there is a feeling of effortlessness there, from a diversity perspective. However, there is always the question of what kind of diversity one is presenting. For example, fashion is seamlessly connected to the body and the types of bodies we see in fashion images are still very limited, simply because we have deemed a certain size and shape as more desirable than the other. From a marginalized body perspective my collections aren’t particularly diverse, therefore I am actively working on doing better.

Is design being your way to fight for human rights?
For me design is one way, however not the only one. My work as the Managing Editor of Ruskeat Tytöt (brown girls) Media, a Finnish online platform with a mission to broaden the representation of marginalized people in the field of culture, media and art has been an equally important way too.
With that said, as I mentioned earlier, I really don’t find any of this as a fight for human rights, but rather more selfishly a fight for the existence of myself and people like me. I don’t say that to downplay the importance of what I am doing with my work, nor to toot my own horn. What I’m saying is I’d prefer not to have to worry about any of these diversity and representation issues and focus on something else. I wish that Brown or Black LGBTQ+ people wouldn’t feel like they need to make a point about their existence, nor shod they. It’s just that we have some very basic issues like equality or human rights to figure out while we express our creativity.

It is your first fashion week and it’s a special one, what will that change for you?
I have worked for brands that present collections during fashion week, but you are right that this is the first fashion week where I am presenting something of my own. I am super excited about it and delighted we were able to arrange the exhibition, all things considering. It has already connected me to many new amazing and talented people, and I really wish this creates a foundation that I can build upon in the future, in terms of discussing representation and diversity in fashion in the Nordics. I am confident this will happen!

Do you think the Stockholm fashion week is a good way to express your thoughts?
I think any fashion week should be a good platform to express the types of thoughts and views people like me present. I think it should go without saying that these types of discussions are welcome. I think all the Nordic fashion scenes have similar issues when it comes to representation and inclusivity, and while some fashion weeks are maybe are better equipped for the difficult discussions than others, the most important thing is that now it’s slowly happening.

Do you think the Stockholm fashion week is a good place to highlight ethnic minorities?
I don’t have enough experience to evaluate if it at the moment is a good place or not, however it of course should be. No fashion week should be any different in terms of requirements for representation and highlighting ethnic minorities. As long as fashion weeks are presenting brands that aim to be global, the casting etc. should reflect that global audience. And with that said, even if there somehow magically wouldn’t be any people of color in the Nordics, we would still all collectively benefit from structural racism and discriminatory power structures, so if anything, we would still have an obligation to actively work on highlighting and normalizing experiences such as ethnic minorities.

What message do you want to deliver during the fashion week?
In addition to promoting themes such as the spectrum of gender or POC representation, I do want to hammer down a message, that we, LGBTQ+ people of color are here, even in the Nordics, creating amazing, thoughtful, and artistically ambitious things. We have been discussing these themes for ages, it is just only now that we are being listened a little bit. Ultimately, I hope that my installation stirs up a curiosity to learn more and an ambition to educate oneself on these matters.

What kind of clothes will you prefer during the fashion week?
As a designer, I am always hesitant on judging or making demands on other designer’s work, as I see that as the job of a stylist or fashion journalist/critic. I guess it’s safe to say that I’ll prefer clothing that meets the moment environmentally, ethically and from a social responsibility perspective, both externally within the production cycle and internally within the company.

Which person would you like to see wearing your design?
The character Harper in HBO’s tv-series We Are Who We Are 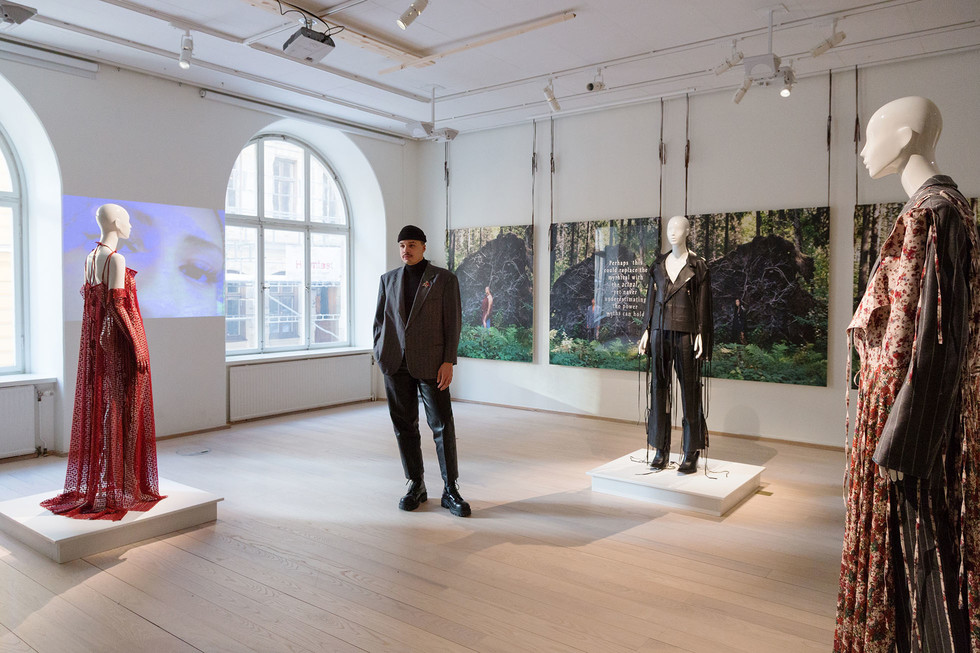 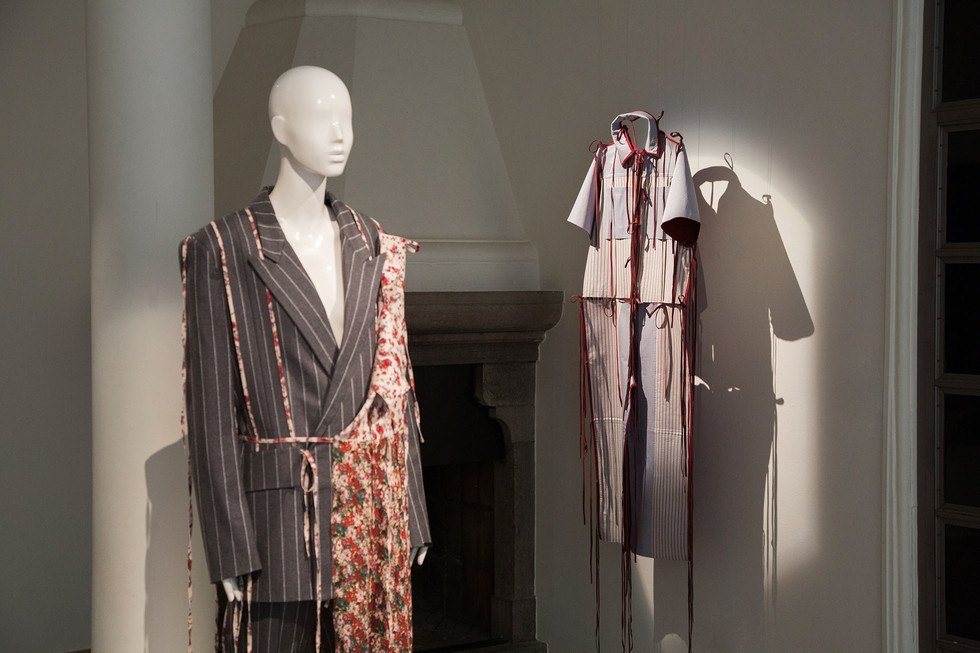