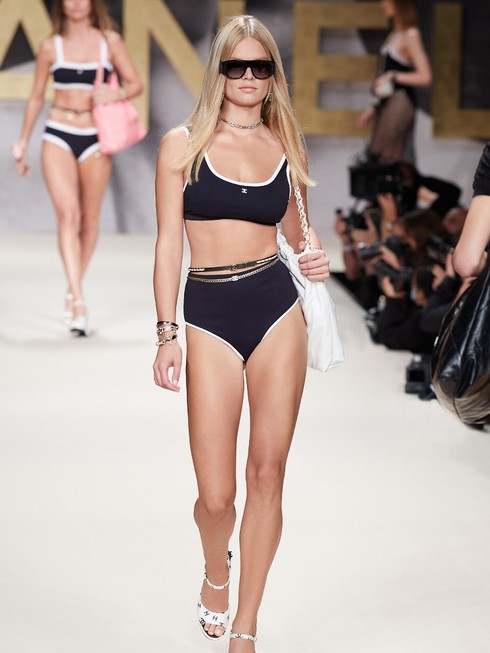 For a minute, Chanel took us back to the 80s, bringing back memories of a time when models sashayed down the runway to the music of Cyndi Lauper’s Girls Just Want to Have Fun and George Michael’s Freedom, surrounded by photographers and flashing cameras.  A time when there was so much playfulness, fun, and magic at the shows!

I used to love the sound of flashbulbs going off at the shows in the 80s when the models were on a raised runway. I wanted to recapture that emotion and, recreate that type of runway where the atmosphere made her yearn for a lot of very simple bathing suits in gold or white with black trimmings, and, short dresses in pink or mauve tweed, fishnet skirts, jackets embellished with multicolor crochet, and denim suits, recalls Viard.

In Paris, Chanel usually shows at The Grand Palais but, as it is closed due to renovations, Viard chose a smaller intimate space, the Grand Palais Éphémère. The background of the runway was a black and white photo of Vivienne Rohner also taking a picture herself. Viard confides Fashion is about clothes, models, and photographers.  Karl Lagerfeld used to photograph the CHANEL campaigns himself. Today, I call upon photographers. I love the way they see CHANEL…it inspires me. The photographer duo Inez & Vinoodh have also produced a series of video teasers and photographs including the backdrop image of Vivienne. Also featured are Lily-Rose Depp, Rebecca Dayan, Quannah Chasinghorse-Potts, Alma Jodorowsky, and JENNIE embodying both the photographer and the model.

As we have now seen on the streets during Copenhagen and Stockholm Fashion Week, people want to undress, uncover their bodies and wear swimsuits and bikinis going out. There’s a sense of relief and freedom to celebrate our bodies now.  It’s time to get rid of the sweats and hoodies and bare it all. And Chanel followed suit with lots of bathing suits, short shorts, and cropped tops. Another favorite look was worn by the house’s muse of 20 years, Amanda Sanchez, bringing her Brazilian personality and infusing it playfully on the runway. The midriff cropped shiny black leather jacket and matching skirt with perfectly exposed slits is the right amount of nakedness to be chic-ie as well.

And we can’t talk about Chanel without mentioning the accessories, can we? It will never do. And it was hard to miss the big shopper bag and the soft quilted ones with the super-sized chain. I do love big chunky chains.  And the flared heels and buckles of the Mary-Janes and sandals remind us of pirate shoes. “I always like to have something romantic with a touch of mystery,” adds Viard with amusement. 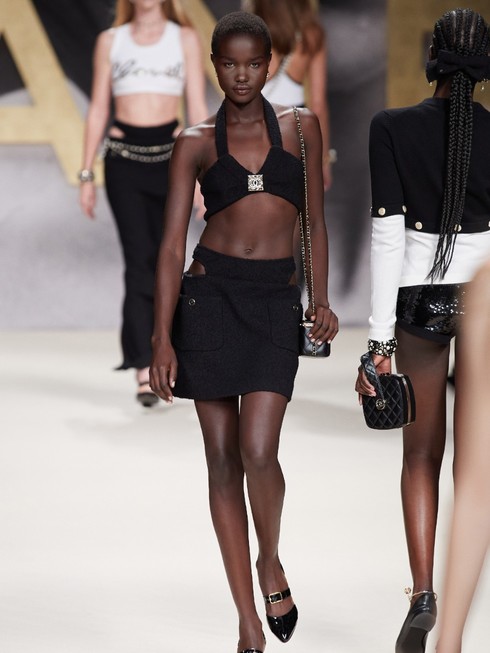 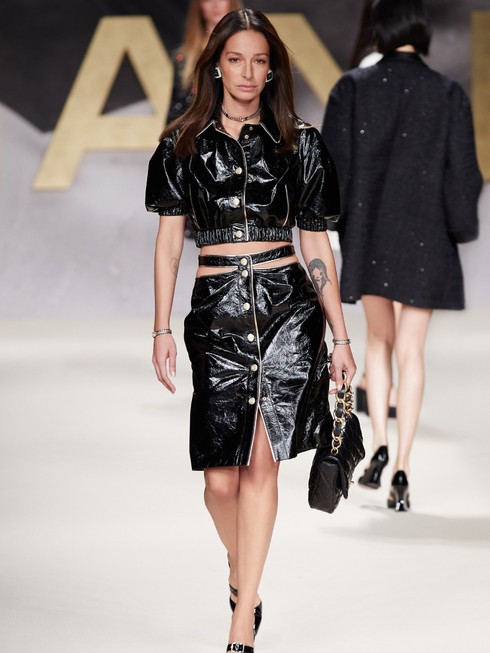 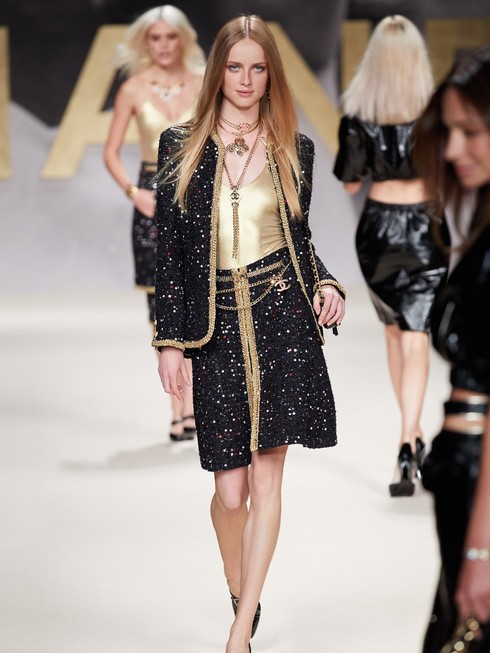 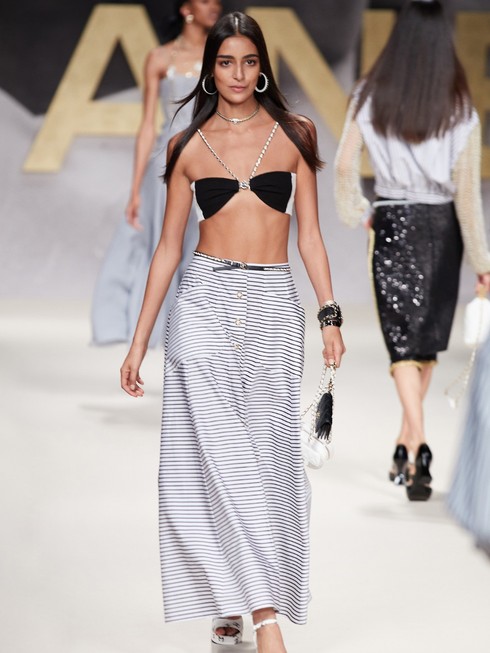 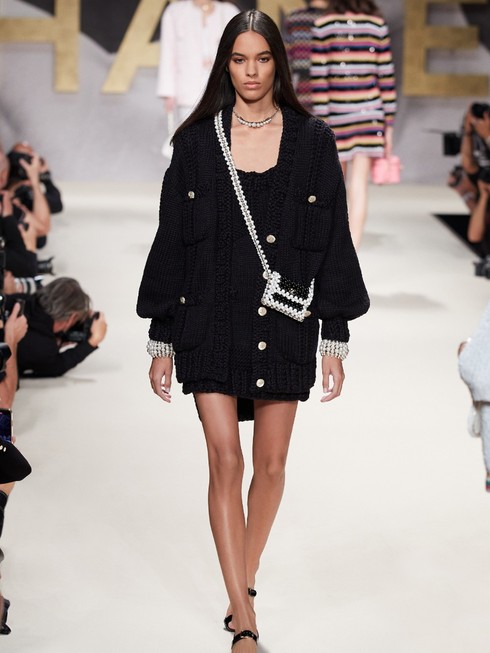 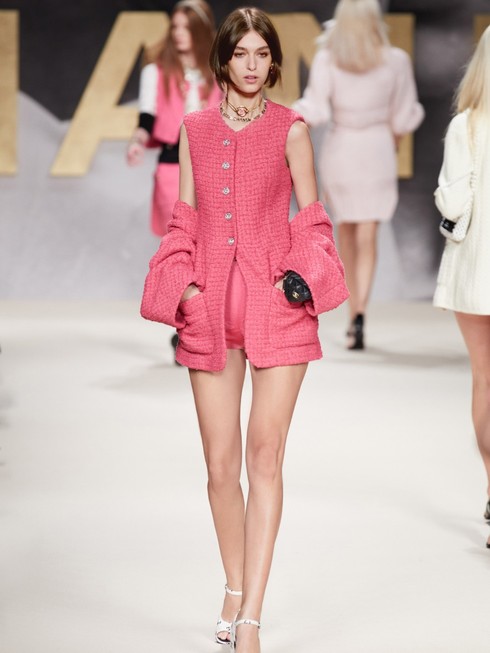 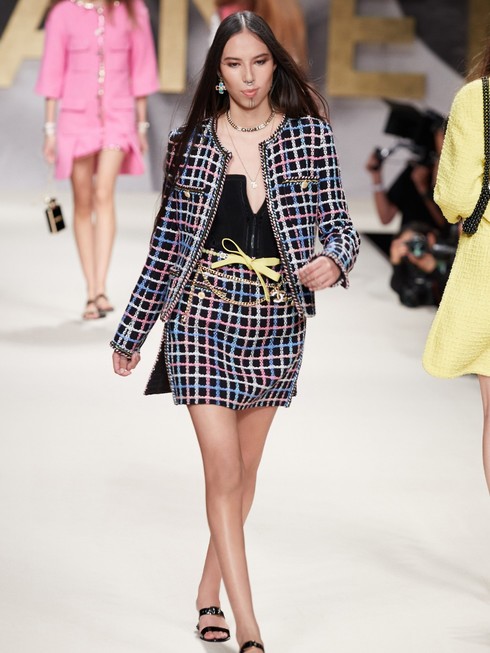 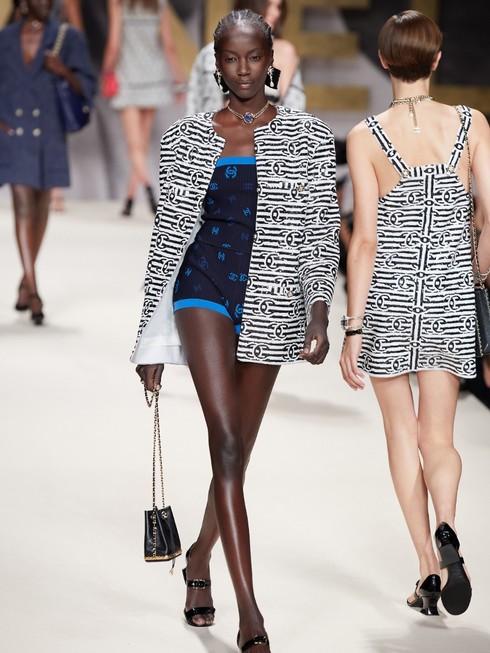 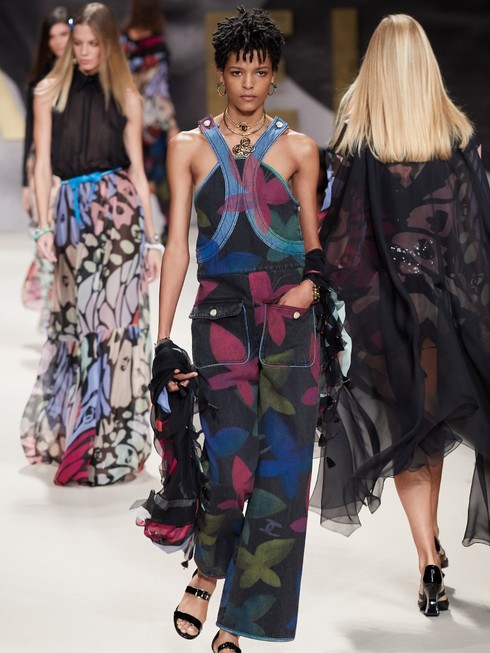