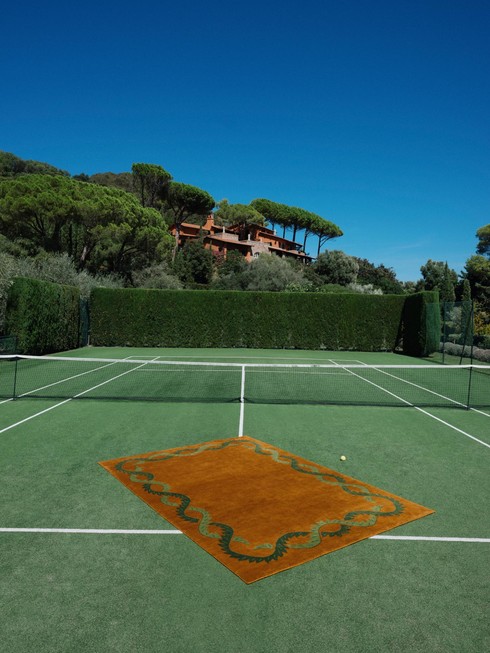 An natural merge of amber and green, ‘Climbing Vine’ is the result of a collaboration between Swedish rug company Nordic Knots and London-based design studio Campbell-Rey to create a rug design for Italy’s Hotel Il Pellicano, where it is debuted this month. It’s also available to buy exclusively from Issimo. For those unfamiliar with Campbell-Rey and Nordic Knots: the two ventures first teamed up in 2021 for a Gustavian-inspired collection that weaved together French neoclassicism influences with modern Swedish interpretations and British flair.

*Wallpaper reports on that the ‘Climbing Vine’ rug is simple but impactful, and has just enough greenery to be the perfect visual fit in the bright and terracotta-tinged grounds of Tuscany’s Il Pellicano. Nordic Knots was founded on the Scandinavian tradition of functional design with a minimalist aesthetic. The rugs are designed in Stockholm Atelier and handmade by highly skilled and experienced Goodweave™ Certified weavers in Bhadohi, India. The new colourway marks the second iteration of the ‘Climbing Vine’ rug. The first, in lilac, was released as part of an earlier collection from Campbell-Rey and Nordic Knots, comprising three colourful rugs influenced by art deco and Gustavian style, with motifs including wreaths, folding ribbon and nods to garden design.

“The spirit of Italian Dolce Vita has always been a great inspiration of ours and few places embody this as beautifully as Monte Argentario’s iconic Hotel Il Pellicano” said Charlotte Rey and Duncan Campbell of Campbell-Rey. When it came to reimaging the rug, the creatives went to work to create a version that would “pay homage to this magical place''.