Male fashion. History and culture have left their mark on the phenomenon. The result has landed in a market overshadowed by fashion marketed towards women. The book publisher Lagenskiölds published Male Fashion - An Unknown History at the beginning of November. Fashion historian Ingrid Giertz-Mårtenson has gathered some of the world's foremost writers and researchers on the subject and created this comprehensive book on men's fashion spanning from the 16th century to the present day.

Manligt Mode - an unknown history gives a picture of what has happened in men's fashion in recent centuries: how phenomena such as 16th-century court costumes, the well-dressed dandy, music, and sports references, and gender issues made a lasting impression on the fashion picture. It also includes texts on timeless trends such as denim, black and the Ivy League, and lists brands and people who have been particularly important to men's fashion in recent decades. The purpose of the book is for men's clothing to become as well known and discussed as women's. Apart from being the lead author, Giertz-Mårtenson has written the foreword and two additional chapters: “Ruler of the impermanent. The esthetes Robert de Montesquiou” and “Henry Poole & Co and Savile Row. An insight into English tailoring history”.

My earliest memory of learning about men's fashion history was in an early course at university called the human and the material, where we read an anthology on physical environments and their impact on us during the last hundred years. One chapter was called “Father in the Window”. The chapter was about how a physical environment described and changed the social through commerciality and norms. The new modern man stood in the shop window and beckoned, clothed in materiality, paternal love, and exuding hegemonic masculinity. This was the first time the man was presented as someone commercial, and with that also followed a long list of new standards.

One of these was the holiday of Father's Day when the spotlight on consumption was directed only at the father, and he was celebrated with tobacco, socks, and slippers. The dilemma that arose was that it was his money that was being traded, which for many was perceived as hypocrisy. This was naturally rooted in a patriarchal structure, where women rarely had an income of their own. I found it very interesting, but it was only a small piece of history from Sweden about one hundred years ago. This is why the interview with Ingrid Giertz-Mårtenson is both exciting and right on time. Connecting two of the most interesting subjects out there, fashion and history, can't go wrong.

How did you get the inspiration for this book?
I have always been interested in fashion as an expression of culture; interested in why we dress the way we do, how we are affected by the clothes we wear and the styles we see around us and what ‘fashion’ actually entails. Throughout my professional life, I have been active in various areas of the fashion industry, both in Sweden and internationally. But it has always – or almost always – been about women’s fashion. This appears so obvious, one hardly sees a reason to question it. Today, the parts of the fashion industry catering to women represent around sixty-five percent of the international clothing market, with the remainder divided into almost equal parts between men’s and children’s clothing. Academic literature primarily focuses on fashion for women, and media output on fashion generally refers to womenswear.
In short, the term fashion seems to have a tendency of being automatically identified with women’s fashion. And yet men make up half of the world's population! The result of a survey I conducted showed also that the knowledge of the average man about the history of men´s fashion was very limited. That's why I decided to publish this book.

Why do you think the interest in examining the male side of a historically and culturally female scene is coming right now?
For decades books and exhibitions on the history of Fashion have 90% dealt with women´s fashion. I believe many fashion historians, like me, felt that there is now a need for information regarding the history of men's fashion. So many things have changed in our understanding of masculinity during the last decades. One example of this is the important and very successful exhibition Fashiniong Masculinities: The Art of Menswear that took place at the Victoria and Albert Museum in London this year.

Is there anything in men’s fashion history that stands out from other developments in fashion and trends?
The history of The Suit is fascinating: one of the authors in the book, museum director and cultural historian Christopher Breward, takes the reader on a personal journey inspired by the seventeen suits he keeps in his wardrobe – garments imbued with memories, experiences, and fashion history stretching back through the centuries. The suit is an enduring constant in menswear; its significance testifies to the fact that men’s clothing and fashion have inspired women’s fashion entirely differently than vice versa.

Do you have a personal favorite era of men’s fashion? Something that might have inspired certain chapters in the book?
Few periods have seen such a significant shift in our perception of manliness and men’s fashion in the most recent decades. Choosing to focus on the male body, many contemporary designers have presented a different, softer view of masculinity. Traditionally masculine garments have been replaced by more fluid styles featuring alternative materials and designs.

The construction of ‘male’ and ‘female’ has become more flexible, and the ongoing process of LGBTQ+ emancipation allows the boundaries between the sexes to become more and more actively questioned. Masculinity today encompasses an entirely different palette of fashion elements, all of which are connected to the continuing evolution of society and discussions around norms, ethnicity, and body shape. At the same time, well-established, traditional items of clothing such as sports-, outdoor- and functional wear have continued to have great success, while classic, expertly tailored men’s garments have gained a new and affluent clientele.

What kind of imprint do you want this book to leave on the reader?
This book does not claim to tell the complete story of men’s fashion. This would be impossible and is not our intention. Its purpose is rather to shed light on the ‘untold story’. For too long, the history of men’s fashion has been hidden behind the hypervisible forms and evolution of women’s fashion, justified by the claim that a male interest in fashion could not
be combined with proper masculinity because fashion was female fashion.
What I hope above all is that this book will be the beginning of a deepened discourse about men’s fashion and masculinity and clothing; that other books will be written on the subject, that the media will pay attention to it and that the subject will be discussed in a serious and forward-looking way. 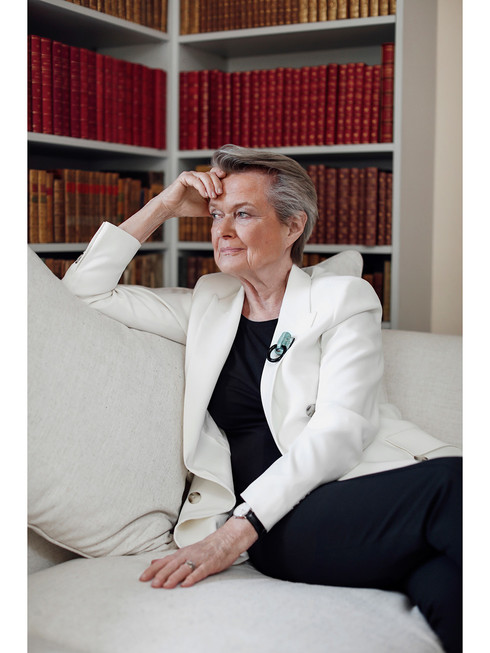