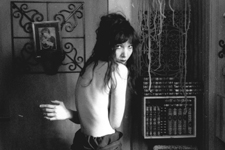 Aëla Labbé was born in 1986 in Brittany, France. From an early age she devoted herself to dancing, a passion which led her to Amsterdam. There she studied theatre-dance at the Hogeschool voor de Kunsten for three years. Back in France, she became increasingly interested in photography, which she considers, in essence, connected to dance.

Largely self-taught, she used her dancing skills to approach photography as a form of choreography, giving special attention to elements of composition: body, space and time.

Her style is characterized by a certain singularity. It consists of constructed scenes, filled with something that wavers between sorrowfulness and poignant delight and belonging to a realm where the body language and its emotions are essential.

Her family is another key that unlocks the world she has created through photography; her nephews, in particular, are the main protagonists of her photographs. It was, thanks to them, that childhood has become a recurrent and determinant theme in her work. It is based on a different vision that aims to show a darker mysterious side through unconventional representations of the early time of life.

In the most recent part of her work, she tried to dramatize the relationship between humanity and nature, aiming at objectifying her deeper and most peculiar feelings- her ethic and values, reaching a point where photography and ethereality merge imperceptibly.

“To share my vision is a need and a goal after which I go unwaveringly. As I gaze at the world that is ours, I try to bring forth some magic that carries hope and fantasy, as my own way of swearing an oath ever to resist materialism and dreamlessness.”