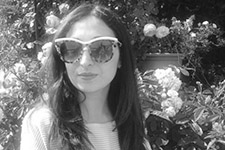 Giovanna attended a Fashion and Lifestyle Journalism course in London at UCA University in 2011 after graduating in Literature and Modern Languages in Triest (Italy) in 2010.

Before graduating at the Master, she attended a copywriting course in Rome at Minimum Fax Publishing house in 2012.

Then she moved back to London to graduate at the Master and in the meantime she interned for 8 months at Wallpaper* Magazine in the fashion department. In June 2013 she moved to Milan to work for L'Officiel Italia. At the moment, she is Features Editor for both L'Officiel Italia and L'Officiel Hommes Italia.