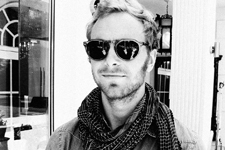 Kalle Gustafsson is a Swedish director and photographer. A master of the atmospheric cinematic movement, Gustafsson is represented by Skarp Agent and shoots both print and motion video for an advertising clients including Paul Smith, Gant, Tod´s, Orient Express, Hackett and editorial clients GQ, Marie Claire, Mr. Porter, and Monocle among others.

After studying photography as well as French in Paris and film production in Sydney, he settled to Stockholm, working as an assistant for a Swedish photographer for 18 months, followed by six months of backpacking from Mexico to Rio. Since then Gustafsson has been working as a freelance photographer. The way he shoots is just what he thinks is a nice representation of the world. His work has a very relaxed, natural style without sacrificing classic formal considerations, beauty or high production values.