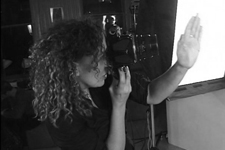 Katrin Thomas’ images have been published internationally, including in
her first monograph “Exits-Living Fashion”, Edition Stemmle, 1999.

After having started her career as a photographer in New York in the
early 90’s, where she lived for over 12 years, she is now based between
Berlin and London. Her work is mainly fine art orientated yet extremely
versatile. Katrin is currently writing a screenplay.

She has been awarded several grants and prizes and has been working with
major ad agencies as well as photographing for a wide range of
international magazines. In one of her fine art projects ‘Noview’ she
has worked with a hypnotherapist; models have been photographed under
the influence of hypnotic suggestions based around the beauty and pop
industry, including the young Paz de la Huerta and Jemima Kirke.