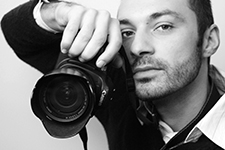 Nico Iliev is a New York - based fashion and beauty photographer. His
photographic and film work, represented by Tony Reagan in NYC and D the
Agency in Dubai, has been featured in Vogue, W, Elle, Nylon, Culture,
Beautiful Savage, Tantalum, the New York Times, Assouline and FLATT
among others. He serves as editor-at-large and brand specialist at FLATT
magazine with over 15 years of experience as an artist in customized
rich media content, commercial still photography and editorial practice.
Nico has served as manager of the editorial team at the critically
acclaimed art and culture publication “Let’s Panic” published by Greg
Kadel. His commercial clients include L’Oreal, Redken, Pureology,
LLBean, Barneys, Quiksilver, MPatmos, Eugenia Kim, Cooper and Ella,
Christophe De Menil and more. His still photographer credits for motion
pictures include ‘Emoticon’ and ‘The Visionary’ (Tesla), ‘The Science of
Love’ and others . Nico has been a two time award winner and seven time
nominee for his photographic beauty work by the Professional Beauty
Association of America. He was featured as one of seven international
artists in the Crystal Express train travel art project by Adidas,
culminating with an exhibition at Pioneer Works in 2014 and his
photography fine art work was featured in the Byrd Hoffman Watermill
Foundation benefit auction in 2015. Nico also acts as a judge for the
NAHAs and as an expert curator at the Redken 5th Ave Exchange for beauty
on film.