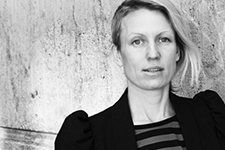 Big cities have always been a source of fascination for Sanna Lindberg, and she often uses elements of urban imagery as backdrops in her photography. “I like it when the city and its inhabitants merge together”, she says. “When humans make impressions on their environment which in turn affect the people.” Sanna is a true vagabond and has been traveling much of her life. At the age of 15 she lived with her family in India. That was also where she picked up an interest in photography. Sanna’s artistic ambitions led her to Paris where she first studied film and then began working as a photographers assistant. After seven years in France, a few longer trips to Argentina, Australia, South Africa and Tokyo, she is now based in Stockholm. Sanna has a strong sense of color and form and her imagery is sensual, poetic and sharp. She succeeds in capturing the simple and spontaneous, whether she is photographing people, food or interior design. “My photography has gone from a quite gritty documentary style to still life. Whatever I am working with, it is always important to first put things in a context and then let the story continue outside the given frame.”