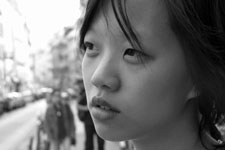 Born in New York in 1986, Vivienne grew up between Paris and Hong Kong. After graduating from Parsons School of Design in Fashion Design, Vivienne worked as a designer for the Fashion House Anne Valerie Hash in Paris for a few years. In parallel, she started developing a growing interest in photography which allowed her to express freely, while keeping the elements in styling. Vivienne eventually left her previous job to pursue her new interest. Self-taught, she have developed her own universe, which can be described as personal, soft, feminine, sensual and dreamy.