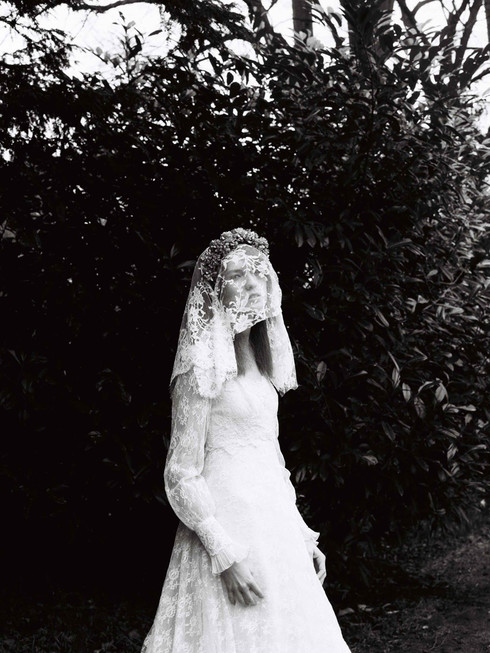 “I saw that the bride within the bridal dress had withered like the dress, and like the flowers, and had no brightness left but the brightness of her sunken eyes. I saw that the dress had been put upon the rounded figure of a young woman, and that the figure upon which it now hung loose, had shrunken to skin and bone.”

Miss Havisham in Charles Dickens’ Great Expectations is one of the most shocking and resonant characters in the history of literature.

At twenty minutes to nine on her wedding day, Miss Havisham, the daughter of a rich brewer, received a letter from her fiancé that rejected her hand in marriage and made it clear that he was only interested in her for her money.

From that very moment, Miss Havisham’s life froze. The jilted bride stopped all the clocks in her mansion and became a recluse. She never changed out of the white satins, lace and silks of her bridal gown. A victim of deluded expectations, Miss Havisham became the faded spectre in the chair by the dressing-table glass, a veiled, conceited, yellowing weed. Driven by envy, she devoted the rest of her life to exacting revenge for her fate on the young Pip and Estella.

If you’re rejected in love, Miss Havisham is the exact person that you could, but don’t want ever to become: cold, grotesque, solitary and in darkness, secluded from a thousand natural and healing influences.

Generations of audiences have been haunted by the spectral character and enchanted by a book about personal morality, hopeless passion and which carries some of literature’s greatest, Hollywood-scale set-piece scenes - including Miss Havisham’s death, burned alive, patches of tinder yet were floating in the smoky air, which, a moment ago, had been her faded bridal dress.

But don’t think of Miss Havisham as just a ruined relic of fiction, since she may have been a Gothic grotesque that Dickens actually knew.

In 1853, seven years before he published Great Expectations, Dickens wrote about The White Woman, a woman who used to walk through Berners Street, off Oxford Street, London, dressed entirely in white, her hair plaited white round her head and face inside a white bonnet. She wore white shoes, carried a white umbrella and was described by Dickens as a conceited old creature who was simpering mad.

Also, for eleven years, Dickens lived in Marylebone, London, a short distance from a woman who lived the life of a recluse. Her suitor had shot himself on her sofa and his brains had splattered her clothes. After that moment, Martha Joachim never left home - her house filled with images of soldiers which she called her body-guards.