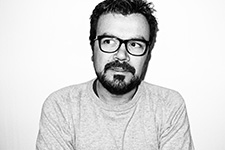 Hans Ericksson more or less grew up in his father's studio in Gothenburg, amongst models, darkroom technicians, assistants and prop designers. “My father was both a photographer and an artist, so images have always been a part of my life. I loved being in his studio, it was an extremely fascinating environment for me as a child,” Hans says. He trained as a graphic artist but after a few years in the profession realised that he was more interested in the actual creation of an image and decided to become a photographer instead. After photography school and some years as an assistant Hans moved to Stockholm and began working for the legendary and iconic photographer Robert Nettarp. After two years with Nettarp and a few more years as a freelance assistant, Hans started freelancing in 2004 and has alternated commissioned photography with personal projects since then. Clients include Absolut Vodka, Fritidsresor, Skoda, McDonalds, NK and a large number of Swedish and international magazines. Above all he finds inspiration for his work in everyday life, in meeting people, in music, in anything he watches on television or reads in a newspaper